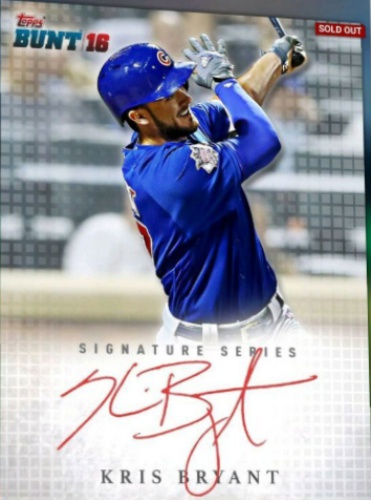 Kristopher Lee Bryant (born January 4, 1992), nicknamed "KB", is an American professional baseball third baseman and outfielder for the Colorado Rockies of Major League Baseball (MLB). He has previously played in MLB for the Chicago Cubs and San Francisco Giants. Prior to playing professionally, Bryant attended the University of San Diego, where he played college baseball for the Toreros. More about Kris Bryant

Current items with a signature of Kris Bryant

These are the most current items with a signature of Kris Bryant that were listed on eBay and on other online stores - click here for more items.

Traded items with a signature of Kris Bryant

If you're interested in Kris Bryant Rookie cards you might want to take a look at our sister site that specializes in Baseball Rookie Cards only.

Most recently, these items with a signature of Kris Bryant were sold on eBay - click here for more items.

Rockies' Kris Bryant won't play again in 2022 because of lingering foot problems (09/25/22): Colorado's major free agent addition has been out since late July with a foot injury

Rockies' Bryant to be evaluated for foot issue (07/26/22): Rockies outfielder Kris Bryant will undergo evaluation for the foot issue that kept him from playing Monday night.

Kris Bryant homers for first time with Rockies to snap career-worst drought (07/06/22): Bryant had not launched a home run in his last 38 games entering Tuesday's contest vs. the Dodgers

Rockies' Kris Bryant homers for first time with Colorado, ends career-worst home (07/06/22): Bryant had not launched a home run in his last 38 games entering Tuesday's contest vs. the Dodgers

Bryant (back) activated, will bat third for Rockies (06/27/22): The Rockies activated star outfielder Kris Bryant from the 10-day injured list on Monday, and slotted him to bat third and play left field in first of a three-game home series against the Los Angeles Dodgers in Colorado.

Kris Bryant injury update: Rockies star returns to IL with back issue after just (05/2022): Bryant's tenure in Colorado is off to a rocky start

Rockies place new OF Bryant on IL with sore back (04/2022): The Rockies placed struggling left fielder Kris Bryant on the 10-day injured list Friday because of back pain.

Rockies add more power to lineup with Kris Bryant (03/2022): For every homer he hit as a kid, Kris Bryant's grandparents rewarded him with $20. Swinging for the fences with the Rockies will pay pretty well, too.

Batting Around: Where will Kris Bryant sign after the MLB lockout? (02/2022): Bryant is one of the top free agents still on the board

Giants Mailbag: Which position player will have breakout 2022 MLB season? (01/2022): In our latest Giants Mailbag, insider Alex Pavlovic looks at potential breakout stars, the Kris Bryant market, the face of the franchise, remaining offseason needs and the likelihood that opening day gets delayed.

Should Yankees pursue Kris Bryant when lockout ends? (12/2021): Is Kris Bryant a viable option for the Yankees to pursue once the MLB lockout is over?

Giant returns: Ex-Cub Bryant honored at Wrigley (09/2021): Kris Bryant was honored with a video tribute and several standing ovations as the former Chicago Cubs star made his first appearance at Wrigley Field since being traded to the San Francisco Giants in July.

Kris Bryant and Giants pull off their biggest ninth-inning comeback since 1993 i (08/2021): Bryant led off ninth and 10th with doubles as San Fran overcame 4-0 deficit

Kris Bryant MLB trade deadline grades: Giants make flawless deal as they attempt (07/2021): It's not everyday a team makes a trade that makes this much sense

Cubs' Bryant day-to-day with tightness in oblique (09/2020): Cubs third baseman Kris Bryant, who has already had a wrist injury and finger issue this season, must now deal with an injury to his oblique.

Cubs complete their first triple play since 1997 (07/2020): With the bases filled with Reds in the seventh inning on Wednesday night, Kris Bryant and the Cubs pulled off a questionable triple play in their 12-7 loss.

Cubs' Bryant avoids rumors, wants 'in the loop' (02/2020): Kris Bryant, who said he wouldn't mind some assurance that he won't be traded from the Cubs before the season begins, is trying to avoid all speculation and rumors.

Kris Bryant's trade value is clear with grievance settled; which teams are best (01/2020): The Cubs star won't be a free agent until after the 2021 season

Why a Cubs-Braves Kris Bryant trade makes sense now that Rendon has signed (12/2019): One club needs a third baseman. The other needs pitching help and controllable players. Could a deal happen?

Where will Kris Bryant play in 2020? Ranking the Cubs star's best landing spots (11/2019): Word is the Cubs might trade Kris Bryant -- what team(s) would make the best fit?

Cubs' Kris Bryant training without restrictions in wake of shoulder injury (12/2018): Chatting with a healthy Kris Bryant and addressing some changes to a few struggling pitchers will have to be the consolation prizes as the Cubs are unlikely to make a move before the winter meetings end on Thursday.

Service time debate, and Kris Bryant's talent, have players buzzing (03/2015): FORT MYERS, Fla. — No matter where you go in spring training these days, there's no escaping the Kris Bryant story.

MLBPA Is Monitoring Kris Bryant’s Promotion Timeline (02/2015): The Cubs are expected to delay Kris Bryant's promotion by a few weeks.

Cubs GM Jed Hoyer says moving Luis Valbuena doesn’t change Kris Bryant’s timetab (01/2015): Cubs fans are clamoring for Kris Bryant's arrival to the big leagues, but they might have to be patient.

Kris Bryant’s Not Even The Cubs’ Top Prospect Anymore? (11/2014): Addison Russell has been tabbed the Cubs' best prospect by Baseball Prospectus.

Cubs' Kris Bryant hot topic at hot corner (10/2014): There wasn’t going to be much debate, especially since the Cubs weren’t in the midst of a pennant race at the start of September when 25-man rosters were expanded.

Cubs Future Four report: Kris Bryant's dream season winds down (08/2014): A look at how the Cubs' "Future Four" prospects are faring in the minor leagues:

Cubs fans itching to bring up Kris Bryant (05/2014): The Cubs were rained out Wednesday night in St. Louis. Even though the present-day Cubs have been a losing propostion, talk has turned to when and if the organization will promote third-base prospect Kris Bryant from Class AA Tennessee.