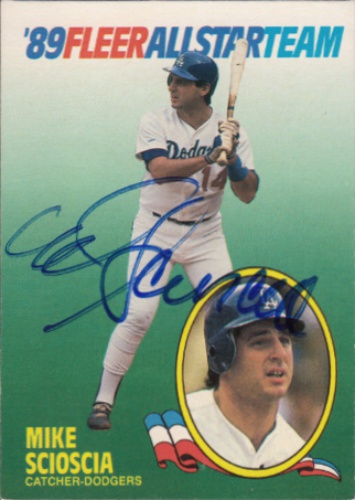 Michael Lorri Scioscia (/ˈsoʊʃə/, SOH-shə; born November 27, 1958), nicknamed "Sosh" and "El Jefe", is an American former Major League Baseball catcher and manager in Major League Baseball (MLB). He managed the Anaheim / Los Angeles Angels of Anaheim / Los Angeles Angels from the 2000 season through the 2018 season, and was the longest-tenured manager in Major League Baseball and second-longest-tenured coach/manager in the "Big Four" (MLB, NFL, NHL, and NBA), behind only Gregg Popovich at the time of his retirement. As a player, Scioscia made his major league debut with the Los Angeles Dodgers in 1980. He was selected to two All-Star Games and won two World Series over the course of his 13-year MLB career, which was spent entirely with the Dodgers; this made him the only person in MLB history to spend his entire playing career with one team and entire managing career with another team with 10+ years in both places. He was signed by the San Diego Padres and Texas Rangers late in his career, but never appeared in a major league game for either team due to injury. More about Mike Scioscia

Current items with a signature of Mike Scioscia

These are the most current items with a signature of Mike Scioscia that were listed on eBay and on other online stores - click here for more items.

Traded items with a signature of Mike Scioscia

If you're interested in Mike Scioscia Rookie cards you might want to take a look at our sister site that specializes in Baseball Rookie Cards only.

The most expensive item with a signature of Mike Scioscia (Dodgers Fernando Valenzuela Mike Scioscia Autograph 1981 Topps 302 Rookie Signed) was sold in May 2020 for $329.99 while the cheapest item (Mike Scioscia 88 World Series Signed Gateway Cachet) found a new owner for $0.06 in March 2009. The month with the most items sold (23) was October 2009 with an average selling price of $9.99 for an autographed item of Mike Scioscia. Sold items reached their highest average selling price in December 2018 with $66.47 and the month that saw the lowest prices with $0.99 was June 2016. In average, an autographed item from Mike Scioscia is worth $10.00.

Most recently, these items with a signature of Mike Scioscia were sold on eBay - click here for more items.

Mike Scioscia named Team USA manager ahead of baseball's return to Olympics (04/06/21): Team USA will compete for one of the two final Olympic spots in June

Angels Notes: Mike Scioscia looks ahead, not behind (02/25/15): TEMPE, Ariz. -- On the morning before the Angels first full squad workout of the spring, Mike Scisocia made his customary address to the team. He said there was no mention of those three days last October. "I didn't bring up the playoffs," Scioscia...

Angels' Mike Scioscia cautious about Garrett Richards' return (12/2014): Garrett Richards, who underwent surgery in August for a torn tendon in his left knee, was cleared by doctors Monday to begin throwing, and his agent said the right-hander was "on track" to be ready by the 2015 season opener.

Mike Scioscia honored by fellow AL managers (10/2014): Angels manager Mike Scioscia was selected as the Sporting News AL Manager of the Year on Tuesday, an award determined by a vote of managers.

Mike Scioscia is in Better Shape at this Point in His Life (02/2014): This is not a Best Shape of His Life story, as it is clear that Angels manager Mike Scioscia’s BSOHL was back when he was a major league ballplayer. But he is doing a lot better this year: Mike Scioscia looks great this spring. He says he lost 34 pounds, hoping to lose 60 in…

Rift between Jerry Dipoto and Mike Scioscia exists despite denial, per report (08/2013): There is a rift in the Los Angeles Angels organization between manager Mike Scioscia and general manager Jerry Dipoto despite Scioscia's denial, reports Jeff Passan of Yahoo Sports.

VINCENT BONSIGNORE: Time for Mike Scioscia to come home to the Dodgers (05/2013): The Dodgers are in need of a jolt, and Mike Scioscia, whose heart undoubtedly still bleeds blue under all that Angels red, is exactly the guy to provide it.

Angels Manager Mike Scioscia days are limited (04/2013): I never thought I would say, write or even think this thought, but Angels manager Mike Scioscia’s time is running out. It’s not just me saying this. Leaving last week’s blowout loss to the Athletics on Tuesday, a common muttering amongst fans was ‘When is Scioscia going to be replaced?’

Angels: Mike Scioscia says Mike Trout's future is not at leadoff (02/2013): Mike Trout will lead off for the Angels this season. ( Jamie Squire / Getty Images )

Mike Scioscia Bound for Boston Dugout? (08/2012): Despite a disappointing season--remember when World Series tickets were being printed up after the Angels landed Albert Pujols?--Anaheim skipper Mike Scioscia was recently lavished with job security c

Mike Scioscia needs to do something, so why not lighten up? (04/2012): Control-freak attitude isn't working for the Angels' manager, who is being second-guessed by everyone during the team's slow start. Angels Manager Mike Scioscia is not getting the job done.

Sports people: Dontrelle Willis, Mike Scioscia (12/2011): Dontrelle Willis Jimmy Rollins and Willis both attended Encinal High in Alameda, are longtime friends and often trade barbs about who is better. But they've never been teammates, until now. Well, maybe. "He was probably...