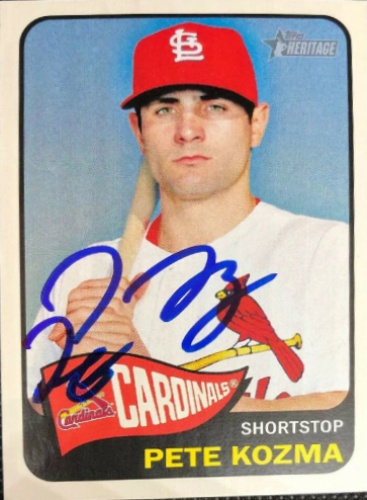 Peter Michael Kozma (born April 11, 1988) is an American professional baseball shortstop for the Kansas City Monarchs of the American Association of Professional Baseball. He has played in Major League Baseball for the St. Louis Cardinals, New York Yankees, Texas Rangers, Detroit Tigers, and the Oakland Athletics. The Cardinals selected him in the first round of the 2007 MLB draft from Owasso High School in Oklahoma, and he made his MLB debut for them on May 18, 2011. He is 6 feet 0 inches (1.83 m), weighs 190 lb (86 kg), and bats and throws right-handed. More about Pete Kozma

Current items with a signature of Pete Kozma

These are the most current items with a signature of Pete Kozma that were listed on eBay and on other online stores - click here for more items.

Traded items with a signature of Pete Kozma

The most expensive item with a signature of Pete Kozma (PETE KOZMA AUTOGRAPHED GAME WORN CARDINALS JERSEY) was sold in October 2012 for $480.00 while the cheapest item (2007 Bowman Sterling Prospects #BSP-PK Pete Kozma Autograph) found a new owner for $0.01 in July 2021. The month with the most items sold (11) was October 2012 with an average selling price of $15.50 for an autographed item of Pete Kozma. Sold items reached their highest average selling price in July 2014 with $149.99 and the month that saw the lowest prices with $0.01 was July 2021. In average, an autographed item from Pete Kozma is worth $9.99.

Most recently, these items with a signature of Pete Kozma were sold on eBay - click here for more items.

Pete Kozma and the SS dilemma: Why the Cardinals shouldn't go shopping (03/12/15): With the All Star break on the horizon, all focus seems to be on trades. Ask 10 fans “what do the Cardinals need?” and nine of them seem to say, “a better shortstop.” The argument has some foundation, as shortstop is the...

Cardinals designate Pete Kozma for assignment (06/25/14): Pete Kozma was the Cardinals' Opening Day shortstop last season and a not-insignificant number of people misguidedly believed that he had long-term upside based on paying more attention to his flukey 26-game stint in 2012 rather than his lengthy track record of mediocrity.

Cardinals Designate Pete Kozma Off Active Roster (06/25/14): 2:42pm: Goold explains (Twitter links) that the Cardinals needed to clear a spot for Gonzales to make the start while also keeping an extra arm in the bullpen. The club knew it could pull back Kozma if he was claimed … Continue reading →

Bird Bytes: Pete Kozma, season preview (03/04/14): The Cardinals' shortstop has struggled mightily with the bat, but his superb defense keeps him in contention for a 2014 roster spot.