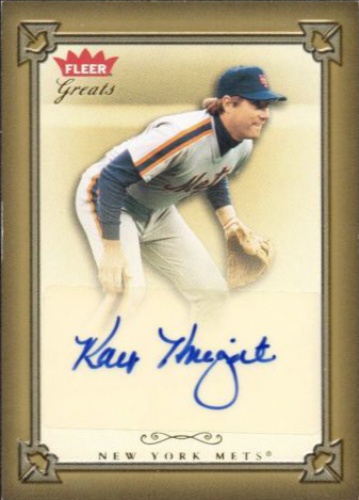 Charles Ray Knight (born December 28, 1952) is an American former Major League Baseball infielder best remembered for his time with the Cincinnati Reds and New York Mets. Originally drafted by the Reds in the tenth round of the 1970 Major League Baseball Draft, he is best remembered to Reds fans as the man who replaced Pete Rose at third base, whereas Mets fans remember Knight as the man who scored the winning run of game six of the 1986 World Series and as the MVP of that series. He was most recently a studio analyst and occasional game analyst for the Mid-Atlantic Sports Network's coverage of the Washington Nationals from 2007 to 2018. More about Ray Knight

Current items with a signature of Ray Knight

These are the most current items with a signature of Ray Knight that were listed on eBay and on other online stores - click here for more items.

Traded items with a signature of Ray Knight

The most expensive item with a signature of Ray Knight (1986 WORLD SERIES GAME 7 RAY KNIGHT WS MVP SIGNED AUTOGRAPHED TICKET PSA/DNA 10) was sold in August 2017 for $349.99 while the cheapest item (Ray Knight Signed Baseball Card) found a new owner for $0.01 in September 2014. The month with the most items sold (19) was July 2012 with an average selling price of $10.00 for an autographed item of Ray Knight. Sold items reached their highest average selling price in February 2016 with $64.95 and the month that saw the lowest prices with $0.99 was March 2011. In average, an autographed item from Ray Knight is worth $9.95.

Most recently, these items with a signature of Ray Knight were sold on eBay - click here for more items.

Why's Ray Knight so excited? (09/26/14): MASN broadcaster is emotionally invested in a team to which he has no visible ties beyond Nats Xtra.

Ray Knight believes the Nats will win the NL East with all his heart (06/2013): Some fans are starting to doubt themselves, but MASN's Silver Fox has no doubts whatsoever.

Albany heart walk hosted by Ray Knight (10/2011): The number of Americans with heart disease is slowly dropping and advocates here in Albany want to keep that trend going. The American Heart Association will hold its annual heart walk in Albany Saturday.