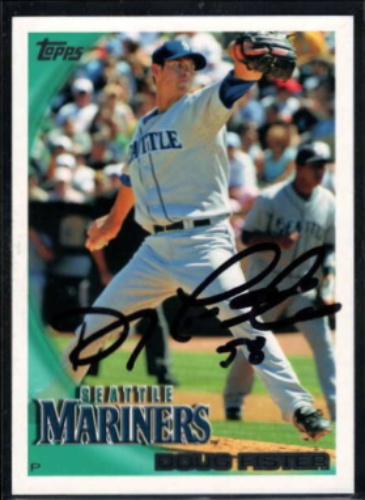 Current items with a signature of Doug Fister

These are the most current items with a signature of Doug Fister that were listed on eBay and on other online stores - click here for more items.

Traded items with a signature of Doug Fister

If you're interested in Doug Fister Rookie cards you might want to take a look at our sister site that specializes in Baseball Rookie Cards only.

The most expensive item with a signature of Doug Fister (Signed Jersey - Pitcher DOUG FISTER - MLB Authenticated - Detroit Tigers) was sold in October 2015 for $85.00 while the cheapest item (Doug Fister signed 2006 Bowman card Mariners Tigers) found a new owner for $0.49 in July 2012. The month with the most items sold (8) was March 2012 with an average selling price of $14.50 for an autographed item of Doug Fister. Sold items reached their highest average selling price in January 2018 with $59.95 and the month that saw the lowest prices with $0.99 was August 2008. In average, an autographed item from Doug Fister is worth $12.50.

Most recently, these items with a signature of Doug Fister were sold on eBay - click here for more items.

Nats Journal: Doug Fister: ‘It’s an honor to be a part of this staff’ (02/19/15): Nationals right-hander Doug Fister is reunited in the rotation with former teammate Max Scherzer and ready for a big contract year.

Nationals Avoid Arbitration With Doug Fister (01/16/15): The Nationals and Doug Fister have agreed to an $11.4MM salary for his final year of club control, thereby avoiding arbitration, per Jon Heyman of CBS Sports (Twitter link). Fister’s salary is an exact match with the projection of MLBTR … Continue reading →

Washington Nationals' Doug Fister tweets Starbucks gift to followers (12/25/14): Doug Fister has 25,000-plus Twitter followers. He picked up the tab for some of them at Starbucks, tweeting a barcode and telling folks to get a drink ... on him.

Nationals Pitcher Doug Fister Buys Everybody Starbucks for Christmas (12/25/14): But cautions against using the barcode more than once

Nats Journal: No extension talks between Doug Fister, Nationals since spring (11/2014): Fister is a cheaper extension candidate than Jordan Zimmermann, but no talks have occurred since the last offer in spring.

Doug Fister keeps Nationals postseason hopes alive (10/2014): SAN FRANCISCO (AP) — Eye black and uniform still on, Bryce Harper emerged from a different kind of fog than typically seen in San Francisco. This was the celebratory stuff from a Nationals victory party, and he had earned it, all right.

Nats Journal: Doug Fister to start Game 1 of doubleheader and other notes (09/2014): Wilson Ramos and Anthony Rendon get hit by pitches, and more on Gio Gonzalez's dominant outing.

Your 2014 Doug Fister Award nominees (08/2014): What about those underappreciated pitchers who go largely unnoticed despite providing tremendous value to their team?

Tigers Mailbag: Doug Fister trade looking worse and worse (07/2014): The Tigers have the fans all riled up again, thanks to another mini-downslide, an offense that's been snoozing since the All-Star break and a bullpen that continues to look absolutely awful, even with the addition of Joakim Soria.

Doug Fister is 5-0 with a 1.83 ERA since his delayed, rough Nationals debut (06/2014): Doug Fister's debut for the Nationals was delayed until mid-May by a season-opening stint on the disabled list, but now he's healthy and showing why so many people thought Washington pulled off a great trade getting him from Detroit this offseason.

Doug Fister, Man of Mystery (02/2014): The Tigers traded Doug Fister to the Nationals for three players who weren't really on anybody's list of future stars. Now that Dave Dombrowski has explained the deal, does it make more sense? Maybe. A little.

Tigers GM sheds some more light on unpopular trade of Doug Fister (01/2014): Dave Dombrowski, the Tigers president and general manager, said Saturday at TigerFest that the Nationals originally balked at including pitching prospect Robbie Ray in the deal for Fister. And two weeks later, they relented.

DETROIT TIGERS: Doug Fister sent to Washington Nationals for three players (12/2013): You deal from a position of strength. And you don’t sweat the criticism. Both are something Detroit Tigers general manager Dave Dombrowski learned a long time ago.

It makes more sense to trade high-value Doug Fister than Max Scherzer (11/2013): The time for trading Max Scherzer was a year ago. It probably sounds a bit silly to say that now, during the week Scherzer will more than likely be presented with the Cy Young Award.

Kansas City's Emilio Bonifacio ejected for spiking helmet after getting picked o (09/2013): Royals second baseman Emilio Bonifacio was ejected in the third inning for slamming his helmet to the ground after being picked off at first base by Tigers starter Doug Fister.