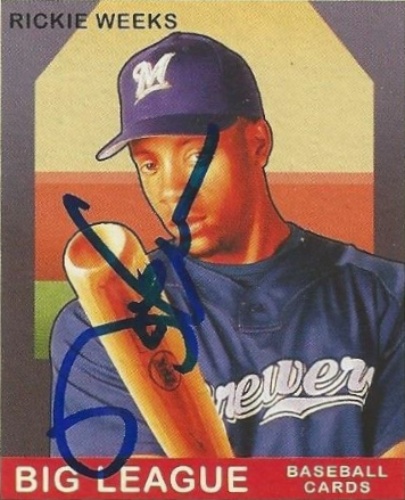 Current items with a signature of Rickie Weeks

These are the most current items with a signature of Rickie Weeks that were listed on eBay and on other online stores - click here for more items.

Traded items with a signature of Rickie Weeks

If you're interested in Rickie Weeks Rookie cards you might want to take a look at our sister site that specializes in Baseball Rookie Cards only.

The most expensive item with a signature of Rickie Weeks (Rickie Weeks Signed Baseball Autographed Ball Brewers COA) was sold in June 2013 for $1700.00 while the cheapest item (Rickie Weeks Autographed 2011 Topps Heritage Trading Card Brewers) found a new owner for $0.06 in May 2013. The month with the most items sold (27) was April 2008 with an average selling price of $4.83 for an autographed item of Rickie Weeks. Sold items reached their highest average selling price in June 2013 with $854.99 and the month that saw the lowest prices with $0.99 was April 2010. In average, an autographed item from Rickie Weeks is worth $9.99.

Most recently, these items with a signature of Rickie Weeks were sold on eBay - click here for more items.

Seattle finalizes 1-year contract with Rickie Weeks (03/09/15): SEATTLE (AP) - Rickie Weeks understands his career as only a second baseman is likely over. He's ready to embrace the idea of being a utility player, even if that means learning positions he hasn't played since becoming a professional. "I'm not going to say it's easy. Anytime you change ...

Rickie Weeks embraces new role with Mariners (03/08/15): The former All-Star second baseman, who signed a one-year contract Friday, is expected to be a utility player in 2015.

Mariners announce the Rickie Weeks signing; left-handed pitcher Edgar Olmos desi (03/08/15): The Mariners officially announced the signing of Rickie Weeks to a one-year contract major league contract. To make room for Weeks on the 40-man roster, left-handed reliever Edgar Olmos was designated for assignment. Weeks is listed as an infielder/outfielder in the press release and has the line ..

Rickie Weeks embraces new role with Mariners (03/2015): The former All-Star second baseman, who signed a one-year contract Friday, is expected to be a utility player in 2015.

How do you feel about Rickie Weeks playing elsewhere next season? (09/2014): Today's Paper, also known as the e-Edition, is an online replica of the printed newspaper. You can view today's paper or previous issues. Not a Subscriber?

Rickie Weeks 4 (05/2014): Milwaukee's Rickie Weeks watches his two-run home run during the fifth inning of his Brewers' loss to the Chicago Cubs on Sunday afternoon at Wrigley Field in Chicago.

Will Rickie Weeks’ adjustments at the plate lead to prolonged success? (03/2014): Today's Paper, also known as the e-Edition, is an online replica of the printed newspaper. You can view today's paper or previous issues.

Brewers: Could Rickie Weeks play first base? (01/2014): The Brewers had one major need heading into free agency, and they still haven’t answered it.

Report: Marlins Showing Interest In Rickie Weeks (12/2013): The Miami Marlins have been unusually active during the annual winter meetings and they appear to be looking at another player who lost his starting job near the end of last season.

Milwaukee Brewers: Rickie Weeks a mess while batting cleanup (04/2013): Rickie Weeks was one of the Brewers' hottest hitters when he was in the two-hole in the lineup, batting .467 (7 for 15) for four games.

Patience paying off for Rickie Weeks (07/2012): Few players have had a more frustrating season than Milwaukee Brewers second baseman Rickie Weeks. An All-Star last year, he began this season barely able to hit .100. Never one to panic, Weeks maintained he would keep plugging along and now shows signs of returning to form.

Rickie Weeks, Cody Ransom help Brewers avoid sweep against Reds (06/2012): Here are the most recent story comments. View All No comments yet! New social media campaign kicks off in Cincinnati...

Rickie Weeks' slump is not his own doing (05/2012): Milwaukee Brewers second baseman Rickie Weeks is slumping horribly the first two months of the season - but none of this is his own doing. The gremlins of baseball have burrowed deep into his soul and he can't buy a base hit for love or money.

Rickie Weeks' 3-run homer leads Brewers over Astros, 9-6 (04/2012): MILWAUKEE - Randy Wolf could tell the Milwaukee Brewers offense was ready for a big night. He was right.