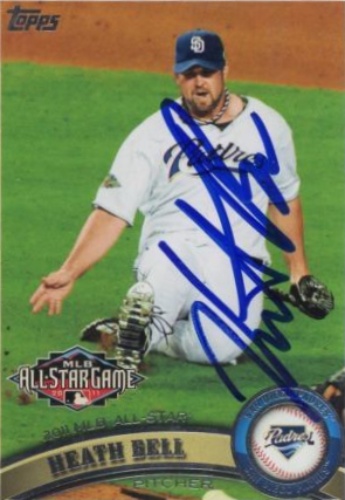 Heath Justin Bell (born September 29, 1977) is an American former professional baseball relief pitcher. As a closer with the San Diego Padres from 2009 to 2011, Bell was a three-time All-Star and twice won the Rolaids Relief Man Award. He was also awarded the Delivery Man of the Year Award and The Sporting News Reliever of the Year Award. More about Heath Bell

Current items with a signature of Heath Bell

These are the most current items with a signature of Heath Bell that were listed on eBay and on other online stores - click here for more items.

Traded items with a signature of Heath Bell

The most expensive item with a signature of Heath Bell (Heath Bell Signed 2010 Padres Stadium Banner PSA/DNA COA Auto 5 Feet Petco Park) was sold in April 2013 for $249.99 while the cheapest item (Heath Bell Signed Rawlings OML baseball! WOW! Marlins! Padres! RARE) found a new owner for $0.01 in September 2012. The month with the most items sold (11) was July 2011 with an average selling price of $9.99 for an autographed item of Heath Bell. Sold items reached their highest average selling price in November 2020 with $67.39 and the month that saw the lowest prices with $0.99 was September 2014. In average, an autographed item from Heath Bell is worth $5.99.

Most recently, these items with a signature of Heath Bell were sold on eBay - click here for more items.

Heath Bell has retired from baseball (03/24/15): Veteran reliever Heath Bell was released by the Nationals on Monday after walking five batters and surrendering five runs -- four earned -- over 6 1/3 Grapefruit League innings. And the 37-year-old righty is not going to try to latch on with another team.

Sprinting Weirdo Heath Bell Has Retired (03/24/15): The Nationals released Heath Bell Monday, and today, the 37-year-old reliever said he would retire . Watch him sprint to the mound in the 2011 All-Star Game. Read more...

Heath Bell To Retire (03/24/15): Veteran right-handed reliever Heath Bell, 37, has decided to retire, he tells MLB.com’s Corey Brock. Bell had been in camp with the Nationals on a minor league deal until his release yesterday. Though Bell says he felt good this spring … Continue reading →

Report: Closer Heath Bell headed to Rays in 3-team trade (12/2013): The deal will send Bell and catcher Ryan Hanigan to the Rays along with cash considerations, while the Diamondbacks will receive pitcher Justin Choate and a player to be named later. Cincinnati will get lefty pitcher David Holmberg.

Briefs: Diamondbacks get Heath Bell (10/2012): The Arizona Diamondbacks acquired reliever Heath Bell and infielder Cliff Pennington in a pair of trades that sent outfielder Chris Young to the Oakland Athletics.

Heath Bell wears the black hat in a dud of a season for Miami Marlins (09/2012): Usually it’s Ozzie Guillen who suffers from foot-in-mouth disease.

Marlins plan on giving Heath Bell another shot at closer (08/2012): Miami got off to a poor start this year partly because of Heath Bell’s chronic struggles in the first half of the season.

Miami Marlins reliever Heath Bell apologizes for suggesting team’s catchers were (07/2012): Heath Bell reached out to catcher John Buck and apologized Friday for remarks that suggested he was blaming Marlins catchers for his struggles.