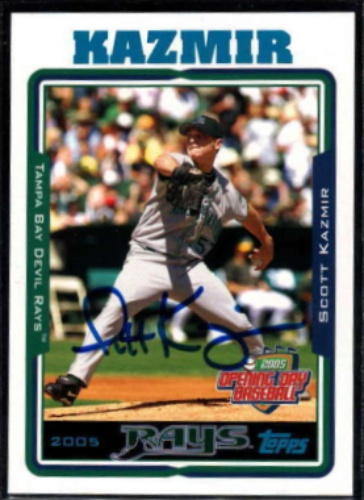 Current items with a signature of Scott Kazmir

These are the most current items with a signature of Scott Kazmir that were listed on eBay and on other online stores - click here for more items.

Traded items with a signature of Scott Kazmir

The most expensive item with a signature of Scott Kazmir (2008 Upper Deck Premier Scott Kazmir 1/1 AUTO Masterpiece Signature TAMPA BAY A2) was sold in May 2022 for $250.00 while the cheapest item (SCOTT KAZMIR '05 UPPER DECK OLD JUDGE AUTOGRAPHED CARD) found a new owner for $0.01 in April 2011. The month with the most items sold (24) was October 2008 with an average selling price of $7.25 for an autographed item of Scott Kazmir. Sold items reached their highest average selling price in September 2019 with $59.00 and the month that saw the lowest prices with $0.59 was October 2013. In average, an autographed item from Scott Kazmir is worth $7.99.

Most recently, these items with a signature of Scott Kazmir were sold on eBay - click here for more items.

Kazmir, 37, designated for assignment by Giants (06/06/21): In an announcement prior to their 4-3 victory over the Chicago Cubs on Saturday, the San Francisco Giants designated Scott Kazmir, the 37-year-old left-hander who returned to the major leagues two weeks ago after nearly five years away, for assignment.

Back in majors, Kazmir, 37, starts in Giants' loss (05/23/21): In his first big league appearance since 2016 on Saturday, 37-year-old starter Scott Kazmir pitched four solid innings for the Giants but took the loss against the rival Dodgers.

A's Scott Kazmir a bit nervous with Will Ferrell at shortstop (03/2015): Lefty Scott Kazmir was making his first Cactus League start on Thursday, and chirping behind him was actor/comedian Will Ferrell

Athletics' Scott Kazmir rescues career with determination, hard work (08/2014): Scott Kazmir is the best pitcher on one of the American League's most successful staffs.

Mets: Scott Kazmir on debut in Queens, and Victor Zambrano: 'He didn't deserve a (06/2014): In Zambrano, Kazmir sees a sort of tragic fall guy. Zambrano ended up making just 35 starts for the Mets and last pitched in the majors in 2007 at 31.

Oakland A's get good news on Scott Kazmir, Coco Crisp (04/2014): Kazmir should be able to make his next start for the Athletics on Saturday against Houston; Crisp's hamstring still a little tender, but he should be back in the lineup shortly.

A's notebook: Scott Kazmir in fine form as No. 2 starter (03/2014): But injuries to the Oakland A's pitching staff will put depth to a severe test.

A's counting on Scott Kazmir to deliver (02/2014): By John Hickey/MediaNews Group PHOENIX -- The first impression A's outfielder Craig Gentry got of Scott Kazmir was that of a pitcher trying to get his career back together.

Scott Kazmir would like to re-sign with Indians (09/2013): Loading... Contract talks between Kazmir and the Indians have reportedly been tabled for now, but will start up again in the future. They will likely wait for the Indians' season to be over to prevent discussions from becoming a distraction.

Browns' tendencies on offense, Scott Kazmir returns to form, Cavs' backcourt: Bl (08/2013): Here are what blogs from Cleveland and around the country are saying about the Browns, Cavaliers and Indians. Featured today are Dawgs By Nature, Wahoo's on First and Right Down Euclid.

Have the Indians thought about signing Scott Kazmir to a multiyear deal? Hey, Ho (07/2013): Now that Scott Kazmir has proven to be a solid part of the starting rotation, will the Indians try to sign him for next year and beyond?

Ryan Mallett as new Browns quarterback, Scott Kazmir's redemption and Cavs' big (02/2013): Here are what blogs from Cleveland and around the country are saying about the Browns, Cavaliers and Indians. Featured today are Dawgs By Nature, Wahoo's On First and Bleacher Report.

Former top prospect Scott Kazmir working his way back at his own pace (07/2012): BRIDGEWATER — Somewhere over international waters in December, Scott Kazmir made himself a promise that he kept through six months of temptation and criticism.

Scott Kazmir has a 36.00 ERA at Triple-A after second straight terrible rehab st (05/2011): Scott Kazmir‘s first rehab start at Triple-A last week was a mess, as he allowed six runs and failed to make it out of the second inning, but his second outing last night remarkably was even worse. He made it through the first two innings unscathed, but then coughed up 10 runs in the third…

Angels' Scott Kazmir to work on mechanics (04/2011): Left-hander will pitch Monday in an extended spring-training game in Arizona in an effort to iron out problems that have plagued him for some time. Reporting from Arlington, Texas