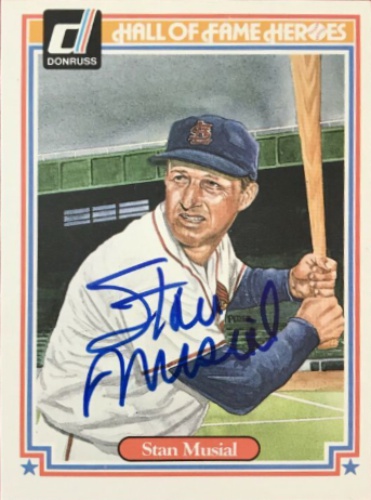 Stanley Frank Musial (/ˈmjuːziəl, -ʒəl/; born Stanislaw Franciszek Musial; November 21, 1920 – January 19, 2013), nicknamed "Stan the Man", was an American baseball outfielder and first baseman. He spent 22 seasons in Major League Baseball (MLB), playing for the St. Louis Cardinals, from 1941 to 1944 and from 1946 to 1963. Widely considered to be one of the greatest and most consistent hitters in baseball history, Musial was a first-ballot inductee into the Baseball Hall of Fame in 1969. He batted .331 over the course of his career and set National League (NL) records for career hits (3,630), runs batted in (1,951), games played (3,026), at bats (10,972), runs scored (1,949) and doubles (725). His 475 career home runs then ranked second in NL history behind Mel Ott's total of 511. A seven-time batting champion, he was named the National League's (NL) Most Valuable Player (MVP) three times and was a member of three World Series championship teams. He also shares the major league record for the most All-Star Games played (24) with Hank Aaron and Willie Mays. More about Stan Musial

Current items with a signature of Stan Musial

These are the most current items with a signature of Stan Musial that were listed on eBay and on other online stores - click here for more items.

Traded items with a signature of Stan Musial

If you're interested in Stan Musial Rookie cards you might want to take a look at our sister site that specializes in Baseball Rookie Cards only.

Most recently, these items with a signature of Stan Musial were sold on eBay - click here for more items.

Stan Musial and a called shot to end an All-Star Game (05/13/20): He is perhaps the most underrated superstar in baseball history. And in one of his 24 All-Star Game appearances, he'd seen enough. So he decided to end it.

Goldschmidt isn't interested in talking contract extension just yet (12/07/18): Now that he is with the St. Louis Cardinals, Paul Goldschmidt is not thinking beyond the 2019 season.

Goldschmidt, 'the perfect fit' for Cardinals, says all the right things (12/07/18): Cardinals first baseman Paul Goldschmidt said: 'I don't know of a player in baseball who doesn't want to play here. There’s certain organizations that are just known for greatness and

Goldschmidt, 'the perfect fit' for Cardinals, says all the right things (12/2018): Cardinals first baseman Paul Goldschmidt said: 'I don't know of a player in baseball who doesn't want to play here. There’s certain organizations that are just known for greatness and

You Can Buy Stan Musial's Wallet, You Monster (05/2014): Do you like baseball? Do you have a few thousand bucks lying around? Could you stand to be a little more ghoulish? Do we have the auction for you. Read more...

#7- Baseball great and Donora native Stan Musial dies (12/2013): Stan Musial, one of baseball’s greatest hitters and a Hall of Famer with the St. Louis Cardinals for more than two decades, died in January at age 92.

Stan Musial portrait created with 2,500 LEGOs (07/2013): A portrait made with LEGOs of Cardinal great Stan Musial is on display at the Louisville Slugger Museum & Factory.

A Tour of Stan Musial's Ladue Home: Hits Market This Week (05/2013): It is another year and another deep run in to the state playoffs for the ... Jeremy Maclin was a standout at Kirkwood. He was also a standout at the ...

Cardinals to wear patch honoring Stan Musial (03/2013): ST. LOUIS — The St. Louis Cardinals will wear a patch on their left sleeve this season to honor the memory of Stan Musial . The Hall of Famer widely considered the greatest Cardinal player ever died in January. The Cardinals will debut the patch in the season opener Monday at Arizona.

Bryce Harper on signing a jersey for Stan Musial, being an RGIII fan (01/2013): Holden and Danny of 106.7 The Fan caught up with Bryce Harper at NatsFest, and learned that the Nats phenom was able to grant Stan Musial a special request before the Cardinals Hall of Famer passed away. Read full article >>

Stan Musial Is Pulling For The 2012 Cardinals (10/2012): CENTRAL WEST END (KTVI)-The greatest St. Louis Cardinal of them all is getting excited about his beloved redbirds. Stan “The...

LOCAL ROUNDUP: Wolcott Scrappers, Waterbury Wild grab wins in Stan Musial State (07/2012): WOLCOTT — The Wolcott Scrappers secured a spot in the Stan Musical State Tournament final with a 7-2 win over the Stratford Storm on Friday night at the BAW Complex.

A few records Stan Musial could own forever (06/2012): Changes in the game have probably cemented Musial as a hit king with many castles.

Seamstress becomes Cardinals fan after stitching Stan Musial's jersey (10/2011): Over the years, many St. Louisans have had a Cardinals baseball experience that becomes a special life long memory.

Phillies vie for NE Stan Musial championship (08/2011):       Weymouth Phillies manager A.J. Mazzola knew that for his team to do well in the MA/NH/RI Stan Musial Tournament there was one thing that they had to do. “We have to hit better,” said Mazzola. “Our hitting has been a problem during the season.”

Trio of area teams ready for Stan Musial tournament (07/2011): After a successful season in the Cranberry League, the Middleboro Bolts, Rockland Cardinals and Easton Huskies are ready for the Stan Musial playoffs.

Big hitter Vecsey scores with tribute to Stan Musial (05/2011): Musial's fans can pick up a new biography that has a shot at putting a new glow of the reputation of "The Man."

Murray Chass slams Stan Musial. Really. (03/2011): Some blogger who writes from home — claims he used to actually be a reporter with a big paper or something — decided today that the most pressing thing he had to do today was to cut Stan Musial down to size: It turns out that the 90-year-old Musial is not the Saint Stan he…

Tony La Russa, Stan Musial and the Albert Pujols contract tug-of-war (02/2011): If the Cardinals icon leaves St. Louis, it won't be because of the players' union