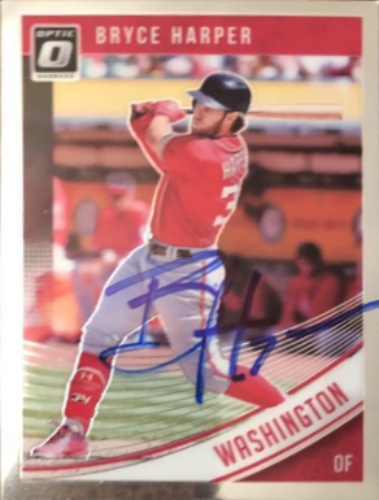 Bryce Aron Max Harper (born October 16, 1992) is an American professional baseball right fielder and designated hitter for the Philadelphia Phillies of Major League Baseball (MLB). Prior to his arrival in Philadelphia, Harper played for the Washington Nationals from 2012 through 2018. He has been touted as a "five-tool player". More about Bryce Harper

Current items with a signature of Bryce Harper

These are the most current items with a signature of Bryce Harper that were listed on eBay and on other online stores - click here for more items.

Traded items with a signature of Bryce Harper

If you're interested in Bryce Harper Rookie cards you might want to take a look at our sister site that specializes in Baseball Rookie Cards only.

The most expensive item with a signature of Bryce Harper (Bryce Harper Washington Nationals Signed Game Used Rookie Bat w/PROOF PSA 1/1) was sold in August 2016 for $9999.99 while the cheapest item (2012 Panini Signature Series #18 Bryce Harper Rookie Rc Washington Nationals) found a new owner for $0.01 in August 2019. The month with the most items sold (94) was November 2021 with an average selling price of $165.50 for an autographed item of Bryce Harper. Sold items reached their highest average selling price in August 2018 with $819.50 and the month that saw the lowest prices with $14.20 was February 2010. In average, an autographed item from Bryce Harper is worth $110.00.

Most recently, these items with a signature of Bryce Harper were sold on eBay - click here for more items.

Bryce Harper returns from 52-game absence with two-RBI single in Phillies win (08/27/22): Harper singled home two runs to get the Phillies' scoring started in a game they never trailed

Harper back in Phils' lineup, hitting 4th vs. Pirates (08/27/22): Bryce Harper was back in the Phillies' starting lineup for the Friday night game against the Pittsburgh Pirates after missing 52 games with a broken left thumb.

Harper to rejoin Phillies on Fri.; Wheeler hits IL (08/25/22): Phillies interim manager Rob Thomson announced Bryce Harper's impending return from the injured list Thursday after consulting with the star. The team, though, won't have Zack Wheeler for at least two starts, as he was placed on the IL.

Bryce Harper injury update: Phillies not ruling out earlier return as reigning M (08/25/22): Harper is 5 for 8 with two doubles, two homers and six RBI in his two rehab games so far

Phillies have big offensive edge over Pirates in battle of Pennsylvania, plus ot (07/2022): Philly is currently tied for sixth in home runs (126), seventh in RBIs (435) and eighth in runs (454) -- and that's with Bryce Harper on the injured list

Bryce Harper injury update: Phillies star has thumb surgery, per report; likely (06/2022): Harper will miss a significant chunk of the season after taking a 97-mph fastball off his left thumb

Phillies' Harper returns after 5-game absence (05/2022): Reigning NL MVP Bryce Harper is back in the lineup for the Phillies after missing five games because of soreness from an injection in his right elbow.

Will Seiya Suzuki keep slugging in MLB? Metrics show he has similarities to Bryc (01/2022): Suzuki, the 27-year-old Japanese outfielder, is expected to sign with an MLB team after the lockout ends

Phillies slugger Bryce Harper claims second NL MVP award (11/2021): Harper led the majors in doubles, slugging percentage and OPS on his way to being named the National League's MVP, an award he also won in 2015.

Jimenez again has 2 HRs, 5 RBIs in ChiSox's win (08/2021): Eloy Jimenez hit two homers with five RBIs for the second straight game -- the first in the majors to do so since Bryce Harper for Washington in 2015 -- as the AL Central-leading Chicago White Sox cruised past the Minnesota Twins 11-1 Monday night.

Short-handed Yankees walk it off against Phillies, continue their winning ways w (07/2021): On the Philly side, Bryce Harper is set for an X-ray on his ankle

Phillies' Harper sits against Mets after hit by pitch (06/2021): Right fielder Bryce Harper wasn't in the Philadelphia Phillies' lineup for their series finale against the New York Mets on Sunday, a day after he was hit in the left calf by a pitch from Jacob deGrom.

Phillies star Bryce Harper says he's 'all good' after taking 97-mph fastball to (04/2021): Harper left the field under his own power after getting hit by Cardinals reliever Genesis Cabrera

All the dominoes that come with the Phillies' J.T. Realmuto deal (01/2021): The Phillies didn't just sign a big check. This deal did other things. It probably kept Bryce Harper happy. It could help lure pitchers. It shows the Phillies are serious about contending. And that's just the beginning.

Star Power Index: Bryce Harper's impressive and overlooked start; scorecard in R (08/2020): Who's dominating the conversation in MLB this week? Let's have a belabored and possibly tortured look

Bryce Harper, Kayla Harper expecting second child in December (06/2020): Bryce and Kayla have a son together named Krew, who was born in August of 2019

How three MLB players, including Phillies star Bryce Harper, fixed their defensi (05/2020): Here are two outfielders and one catcher who made huge defensive strides in 2019

Bryce Harper is not pushing hard for the Phillies to trade for Cubs star Kris Br (02/2020): Harper explained why he thinks a trade might not pay off

Do Phillies have the right pieces to swing a trade for Cubs star Kris Bryant? (01/2020): Alec Bohm could go the other way to team Bryant up with childhood buddy Bryce Harper

MLB Free Agency: Should Giants kick the tires on Anthony Rendon? (11/2019): SAN FRANCISCO -- The Nationals are World Series champions, but for the second straight offseason, they face a hell of a dilemma. Like Bryce Harper before him, Anthony Rendon is the top hitter on the free agent market, and the Nationals could find that they're outbid and lose a second superstar.

Bryce Harper deal was in place, Astros GM says: ‘It didn't happen. So we moved o (02/2019): "it didn't get over the finish line for whatever reason, out of our control. But, yeah, we had interest," Jeff Luhnow said Thursday.

ESPN Player Poll Votes Bryce Harper Most Overrated, This Fact Might Make You Rec (03/2015): He’s still only 22. Remember that.

Nats Journal: Bryce Harper says he will ‘play smarter’ in 2015 (02/2015): After seeing two of his first three seasons shortened by injury, Harper said Wednesday he will be more selectively aggressive in 2015.

Why Bryce Harper will have his best season yet in 2015 (12/2014): On SI Now, Sports Illustrated executive editor B.J. Schecter and associate editors Elizabeth Newman and Ted Keith discuss which athletes will have...

Will Stanton’s massive 13-year contract affect Bryce Harper? (11/2014): Baseball salaries are determined very much like real estate prices, using a thorough perusal of the surrounding properties in the neighborhood — the “comps.”

Nats Journal: Bryce Harper to play for MLB all-star team in Japan in November (09/2014): The Nationals outfielder will represent MLB in a five-game tour of Japan.

Bryce Harper logs his first multi-homer game of 2014 (08/2014): Bryce Harper entered August with numbers far below expectations. He'll enter September with much better-looking stats thanks to a decent showing in August, including a spectacular finish on Sunday.

Bryce Harper returns, and has ideas on lineup (06/2014): The Washington outfielder, who was 1 for 3 in his first game since April 25, said Ryan Zimmerman should play left field, not third base.

Despite surgery, Bryce Harper is still only 21 and still full of potential (04/2014): Forget the media hype and the endorsements, the 21-year-old’s best years should still be ahead of him.

Bryce Harper Accidentally Tweets Picture Of Himself Wearing Nike Shorts (11/2013): Bryce Harper was excited to show his Twitter followers that he had the stitches removed from his knee and is now able to get back to work so he posted a picture of himself riding an exercise bike.

Bryce Harper Plans To Be 'As Big As A House' (09/2013): A bigger Harper could equal longer Nationals postseasons

Nationals eager for Bryce Harper's return (06/2013): After the Nationals played 31 games without him, Bryce Harper will return Monday at Nationals Park.

Bryce Harper: Knee injury will keep him shelved this weekend (05/2013): Loading... Davey: "Probably out of the question" that Bryce Harper plays this weekend in Atlanta. DL becoming a possibility.

Nationals' Bryce Harper bases his career on The Mick (03/2013): The Nationals are expecting big things from Bryce Harper in his second season. / Steve Mitchell, USA TODAY Sports VIERA, Fla. - F.P. Santangelo fondly remembers the aftermath from that summer evening in Miami last August, a wonderful memory that left him with goose bumps.

Findlay Toyota Fetes Bryce Harper (01/2013): Las Vegas' own Bryce Harper will be making an appearance at Findlay Toyota in the Valley Automall Feb. 8 from 6:30-8 p.m. Baseball's No. 1 draft pick is coming off a stellar rookie season during which he was named the 2012 rookie of the year playing for

Bryce Harper and RGIII Twitter love fest (12/2012): D.C. athletes exchange tweets with each other all the time. But there's something about when Bryce Harper and Robert Griffin III do it that sets Twitter on fire. First it was socks ; last night it was Twitter backgrounds. Read full article >>

Bryce Harper and RGIII bond over socks (10/2012): Apparently RGIII’s socks are all the rage with D.C.’s sports superstars. It all started with a tweet from Bryce Harper to RGIII: Read full article >>

Bryce Harper’s ridiculous 19-year-old season in perspective (09/2012): Nearing the end of his remarkable rookie season, any swing Bryce Harper takes may generate history. As the year draws to a close, he has already arguably had the greatest season by a teenage hitter of all time. Pick a category, and he’s probably threatening to top it. Read full article >>

Bryce Harper, Washington Nationals rookie, more than hype (06/2012): As the baseball prodigy opened the blue-and-silver metal case, where his bats were nestled inside, it reminded one of, say, Miles Davis retrieving his trumpet from its case, an ordinary moment that seemed more of a spiritual rite.

Michael Rosenberg: Nationals love Bryce Harper but the feeling is far from unive (05/2012): Bryce Harper has skipped a lot of steps in his baseball career: most of college, his last two years of high school, anonymity. Harper is that rare person whose talent is so outrageous that the rest of him has to catch up to it.

Nationals' Bryce Harper, 19, shows ability, poise in debut (04/2012): Bryce Harper's first day in the major leagues came with all the hype one would expect for the player dubbed baseball's "Chosen One" when he was only 16 years old.

Nationals: Bryce Harper's Demotion A Blessing In Disguise (03/2012): WASHINGTON (WUSA) --We're all disappointed Nationals rookie Bryce Harper won't be making his debut on April 4, at Wrigley Field. We want Bryce Harper to dive gracefully in the outfield, to scale the wall and rob home runs, to gun out a runner at home plate.

Bryce Harper, coming very soon to a ballpark near you (02/2012): VIERA, Fla. — In spring training, the Washington Nationals are so excited about themselves they’re like a roomful of puppies. But the largest of the young dogs is Bryce Harper . All eyes are on him — especially the eyes of his own teammates. Read full article >>

Bryce Harper Facing Scrutiny Only Seen by Jackie Robinson, So Say Nats Officials (07/2011): Bryce Harper, when he finally makes it to the major leagues, is going to be a great baseball player, of this there is little doubt.

Bryce Harper: Baseball's Next Big Star or Future Flameout? (06/2011): A phenom from Las Vegas, only 18, is a budding baseball legend. Why Bryce Harper could be the next big thing -- or flameout

For the love of Bryce Harper (03/2011): If the 18-year-old baseball phenom can avoid the pitfalls of fame at an early age, he'll owe it to family. Comments that include profanity or personal attacks or other inappropriate comments or material will be removed from the site.