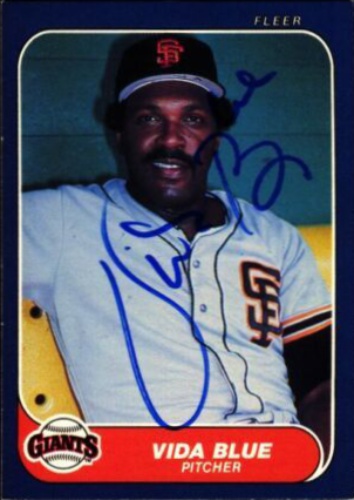 Vida Rochelle Blue Jr. (born July 28, 1949) is a former American professional baseball player. He was a left-handed pitcher in Major League Baseball between 1969 and 1986, most notably as an integral member of the Oakland Athletics dynasty that won three consecutive World Series championships between 1972 and 1974. He won the American League Cy Young Award and Most Valuable Player Award in 1971. More about Vida Blue

Current items with a signature of Vida Blue

These are the most current items with a signature of Vida Blue that were listed on eBay and on other online stores - click here for more items.

Traded items with a signature of Vida Blue

If you're interested in Vida Blue Rookie cards you might want to take a look at our sister site that specializes in Baseball Rookie Cards only.

The most expensive item with a signature of Vida Blue (RARE SIGNED Autographed Vida Blue KNBR San Francisco Giants Bobblehead NIB) was sold in December 2016 for $529.00 while the cheapest item (VIDA BLUE SIGNED AUTO MLB GAME BASEBALL) found a new owner for $0.01 in June 2010. The month with the most items sold (35) was August 2022 with an average selling price of $11.00 for an autographed item of Vida Blue. Sold items reached their highest average selling price in May 2013 with $54.99 and the month that saw the lowest prices with $1.13 was April 2017. In average, an autographed item from Vida Blue is worth $12.88.

Most recently, these items with a signature of Vida Blue were sold on eBay - click here for more items.

Royals’ Ned Yost Grew Up A Giants Fan, Once Spent Vida Blue Autograph (10/21/14): Clearly, this World Series is going to be an inside job. OK, maybe not. But...

Ned Yost totally Yosted a Vida Blue autograph when he was a kid (10/21/14): To be fair, a Colossal Dog probably tastes pretty good.

Vida Blue: I Threw As Hard As I Could, For As Long As I Could (07/10/14): Vida Blue came on the show today to discuss the upcoming golf tournament he will be playing in. The Gene Upshaw Memorial Golf Classic, which benefits The Tahoe Forest Hospital Foundation and Pancreatic Cancer Research.

Prep baseball notes: Vida Blue talks to Tam team (02/2012): VIDA BLUE retired from baseball after the 1986 season — meaning his career was over before any members of the Tam High baseball team were even born.

Bay Area baseball great Vida Blue set to join Jewish Sports Hall of Fame (05/2011): No one who has played for both the Oakland A’s and the San Francisco Giants ever enjoyed as much popularity as Vida Blue, whose bubbly personality and amazing left arm took him to great heights.

Neighbor: Antioch author writes about baseball great Vida Blue (02/2011): Friedman had a chance to meet Blue shortly after moving to California from New Jersey. He was introduced to him after doing an interview with longtime Oakland A s Spanish sports announcer, Amaury Pi-Gonzales.