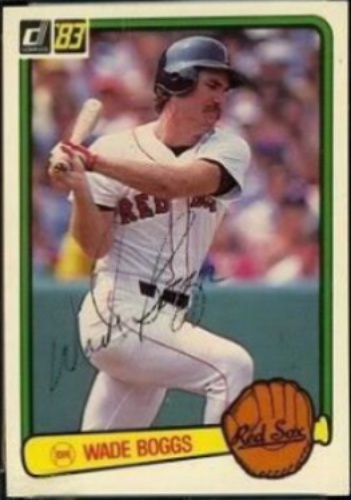 Wade Anthony Boggs (born June 15, 1958) is an American former professional baseball third baseman. He spent 18 seasons in Major League Baseball, primarily with the Boston Red Sox. He also played for the New York Yankees (1993-1997), and the Tampa Bay Devil Rays (1998-1999). He won the 1996 World Series with the Yankees over the Atlanta Braves. Boggs became the 23rd player to reach 3,000 career hits. His hitting in the 1980s and 1990s made him a perennial contender for American League batting titles. He is 33rd on the list of career leaders for batting average among Major League Baseball players with a minimum of 1,000 plate appearances and has the highest ranking of those still alive. Boggs was elected to the Red Sox Hall of Fame in 2004 and the Baseball Hall of Fame in 2005. More about Wade Boggs

Current items with a signature of Wade Boggs

These are the most current items with a signature of Wade Boggs that were listed on eBay and on other online stores - click here for more items.

Traded items with a signature of Wade Boggs

If you're interested in Wade Boggs Rookie cards you might want to take a look at our sister site that specializes in Baseball Rookie Cards only.

The most expensive item with a signature of Wade Boggs (WADE BOGGS 1999 Autographed Game Used MLB Sox Yankees DEVIL RAYS Bat PSA GU 10) was sold in January 2021 for $5275.12 while the cheapest item (Wade Boggs Autographed Card) found a new owner for $0.55 in July 2015. The month with the most items sold (116) was August 2022 with an average selling price of $38.43 for an autographed item of Wade Boggs. Sold items reached their highest average selling price in October 2013 with $259.00 and the month that saw the lowest prices with $7.50 was September 2017. In average, an autographed item from Wade Boggs is worth $34.99.

Most recently, these items with a signature of Wade Boggs were sold on eBay - click here for more items.

10 players to know from KBO and CPBL, including potential future MLB stars and a (05/03/20): Here are 10 of the world's best baseball players currently in action

Why trying to defend Wade Boggs was pretty much impossible (04/26/20): Wade Boggs knew how to use all fields. So much so that perhaps the best plan anyone ever came up with was to line up eight guys behind the pitcher and have them scatter as soon as the ball was released. They didn't do that, but they should have.

Wade Boggs thinks there's a chance he had coronavirus -- and got it from Chris S (04/20/20): Sale and Boggs both thought they had pneumonia during spring training

GoLocalPDX | Sports | From Boggs To LeBron, What Does Science Say About ‘Mind Ov (11/18/18): From LeBron James’ iconic chalk toss to Wade Boggs’ pre-game routine of grounders and chicken, athletes have been employing superstitious tactics in an effort to succeed since the dawn of time. But the real question remains:

The Legend of Wade Boggs' Beer Drinking Continues to Expand (01/26/15): He liked to drink beer on planes, apparently.

Montana man sentenced in Alaska for violation on hunt with former Red Sox player (01/2015): A Montana man has been ordered to pay a $3,000 fine after pleading guilty to federal wildlife violations while leading former Boston Red Sox third baseman Wade Boggs on a 2009 sheep hunt in Alaska.

Catching up with Wade Boggs (05/2014): The latest edition of Mint Condition catches up with Hall of Famer Wade Boggs, who discusses his strangest autograph request, memorabilia he's kept from his playing career and his appearance on "The Simpsons."

A Day's Work: Wade Boggs visits Boog's Barbeque (07/2013): Hall of Famer Wade Boggs continues his never-ending quest to find the most interesting and unique jobs in Major League Baseball stadiums. This week, a visit to Camden Yards for some barbeque with Orioles great Boog Powell.

A Day's Work with Wade Boggs -- Marlins Park (06/2013): SB Nation and Jeep have partnered to bring fans an inside look at some of the more obscure but fascinating jobs at Major League Baseball stadiums.

Wade Boggs still loves to compete, excited for legends game (05/2013): Hall of Famer Wade Boggs thought he would spend his entire career with the Boston Red Sox, but fate intervened.

Wade Boggs Does a Terrible Dance at the Spurs-Thunder Game (12/2012): Baseball Hall of Famer Wade Boggs was in the crowd to watch the Thunder take on the Spurs last night, and he took the opportunity to show off some of his groovy dance moves.  Boggs did his best to support the "White guys can't dance" stereotype.

Opportunity to Meet & Greet Wade Boggs Goes Online (11/2012): CHARLESTON, SC - The Charleston RiverDogs have announced they will hold an online auction for the unique opportunity to rub shoulders with Hall of Fame third baseman Wade Boggs during a private meet and greet opportunity.

Wade Boggs visits Little League series (08/2012): Now batting, catcher Wade Boggs?   The Hall of Fame third baseman squatted behind the plate in his Little League days while growing up in Florida. Boggs even caught an 18-strikeout game one time, but that turned out to be the highlight of his catching career.

Wade Boggs: If I Had Hall Of Fame Vote, Proven Steroid Cheats Wouldn’t Get It (07/2012): Reggie Jackson isn't the only one with an opinion on the great Hall of Fame debate: Should suspected cheats be enshrined in Cooperstown?

Baseball's Wade Boggs taking trip to Cuba (06/2012): Some kids in Havana don't know it yet, but they are about to receive hitting and fielding tips from a member of the baseball Hall of Fame.

Wade Boggs May Be Called To Testify In Clemens Trial (07/2011): The perjury trial of pitching great Roger Clemens began Wednesday with word that Hall of Famer Wade Boggs and former All-Star pitcher David Cone could be called to testify in their former teammate's defense.