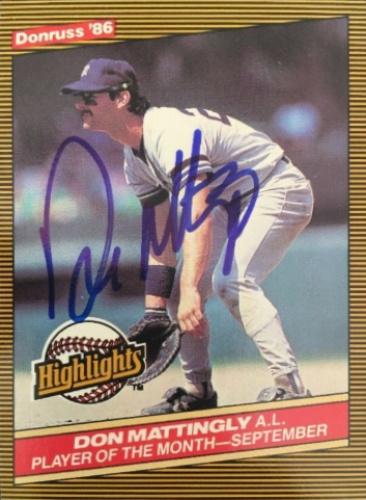 Current items with a signature of Don Mattingly

These are the most current items with a signature of Don Mattingly that were listed on eBay and on other online stores - click here for more items.

Traded items with a signature of Don Mattingly

If you're interested in Don Mattingly Rookie cards you might want to take a look at our sister site that specializes in Baseball Rookie Cards only.

The most expensive item with a signature of Don Mattingly (Mickey Mantle & Don Mattingly Dual Signed 1/1 Fazzino Pop Art Baseball PSA/DNA) was sold in August 2019 for $5555.55 while the cheapest item (1994 (YANKEES) Collector's Choice Silver Signature #192 Don Mattingly) found a new owner for $0.05 in January 2019. The month with the most items sold (125) was April 2020 with an average selling price of $6.23 for an autographed item of Don Mattingly. Sold items reached their highest average selling price in December 2022 with $191.50 and the month that saw the lowest prices with $2.25 was November 2008. In average, an autographed item from Don Mattingly is worth $49.00.

Most recently, these items with a signature of Don Mattingly were sold on eBay - click here for more items.

MLB manager tracker: Don Mattingly out with Marlins; multiple teams to have offs (09/26/22): The manager carousel is starting to move ahead of the end of the season

Marlins' Don Mattingly won't return as manager for 2023 season (09/25/22): Mattingly is on his way out in Miami after seven seasons and one playoff berth

LOOK: Marlins' Jesús Sánchez makes wild barehanded catch, draws famous compariso (09/21/21): Sánchez himself was astonished, as he could do nothing but smile after making the catch on the fly ball

Marlins turnaround nets Mattingly NL MOY honors (11/2020): Don Mattingly was named National League Manager of the Year on Tuesday after guiding the Marlins to their first winning season since 2009 and first playoff appearance since 2003 -- all while overcoming a teamwide COVID-19 outbreak.

Marte available for Marlins; Game 2 postponed (10/2020): Marlins manager Don Mattingly said center fielder Starling Marte is unlikely to bat but will be available for Game 2 vs. the Cubs, which has been moved to Friday after Thursday's game was postponed.

Mattingly: Marlins sidelined by virus feeling great (08/2020): The 17 Marlins players who tested positive for COVID-19 and were transported back to Miami are asymptomatic and "feel like they're ready to go," with some applying for reinstatement, manager Don Mattingly said.

Which Modern Era candidates could get into the Baseball Hall of Fame? (11/2019): We handicap the odds as Dale Murphy, Don Mattingly, Lou Whitaker and more stars of the 1980s and '90s get another chance at Cooperstown.

25 days of Yankee Numbers: No. 23 Don Mattingly (12/2018): Don Mattingly never won a championship with the Yankees, but that didn't stop him from becoming a fan favorite, providing one of the bright spots during the Yankees' 15-year postseason drought.

Dodgers' Don Mattingly not worried by Yasiel Puig's slow start (03/2015): This is a pretty quiet camp for the Dodgers. Once they determine the identities of their relievers, they do not have much to decide.

Don Mattingly celebrated in WPIX promo (01/2015): Get every new post delivered to your Inbox.

IU's unlikely foe: Don Mattingly's son (11/2014): Mattingly once was tdestined to be great, not in basketball, but like his dad in MLB

Don Mattingly will manage Dodgers, even with Joe Maddon available (10/2014): When introduced last week as the Dodgers president of baseball operations, Andrew Friedman said Don Mattingly would “definitely” manage the team next season.

Don Mattingly faces some tough calls for Dodgers' postseason roster (09/2014): Dodgers Manager Don Mattingly spent a good part of Friday afternoon in his clubhouse office, meeting behind a closed door with General Manager Ned Colletti. And with the team's playoff opener less than a week away, it wasn't hard to figure out what they were talking about.

Don Mattingly considering putting Yasiel Puig in center field, even though “he’s (07/2014): Could be cool?

Dodgers, and Don Mattingly, need to get tough with Yasiel Puig (03/2014): Dodgers outfielder Yasiel Puig's actions on and off the field have been a source of distraction for the Dodgers, who are poised to make another playoff run this season if the young star can keep his focus at the task at hand.

MLB: Don Mattingly gets three-year deal as Dodgers manager (01/2014): Don Mattingly will be back as manager of the Los Angeles Dodgers next season with a new three-year contract that takes him through 2016, quieting speculation that his future with the club was somehow in doubt.

Don Mattingly 'Under Contract', Will Manage 2014 (10/2013): Despite the strange press conference on Monday, it appears that Don Mattingly will manage the Dodgers in 2014 lame-duck status or no. [ more › ]

Don Mattingly uses brief postseason playing experience to lead Dodgers into play (09/2013): Los Angeles Dodgers manager Don Mattingly sits in the dugout alone prior to a baseball game against the Arizona Diamondbacks on Monday, Sept. 16, 2013, in Phoenix. The Diamondbacks defeated the Dodgers 2-1.

Don Mattingly on the reloaded, rejuvenated Dodgers (08/2013): It's good to be Don Mattingly these days. A lot better than it was in June, when the Los Angeles Dodgers were nearly 10 games out of first place in their division. Now they're 10 games ahead of any other team.

Don Mattingly's son Preston to play hoops for Lamar (07/2013): Lamar Cardinals head coach Pat Knight coaches against the McNeese State Cowboys in the second half of the finals of the 2012 Southland Conference Tournament.

DODGERS NOTEBOOK: Don Mattingly gives Matt Kemp time off (06/2013): Matt Kemp wasn't in the starting lineup for Wednesday's game, one day after returning from a nearly month-long absence with a right hamstring injury.

DODGERS NOTEBOOK: Manager Don Mattingly vocal about Ted Lilly's silence on injur (04/2013): Ted Lilly's most glaring mistake Monday night wasn't getting shelled for three innings before having to exit a 12-2 loss to the Rockies with back pain.

LOS ANGELES -- Since manager Don Mattingly had a few choice words for his team l (10/2012): Elian Herrera singled in the go-ahead run with the bases loaded in the bottom of the ninth inning, lifting the Dodgers to a 3-2 victory over the NL West champion San Francisco Giants on Monday night that kept their post-season hopes alive.

Nice guy Don Mattingly is still looking for answers (09/2012): The Dodgers manager takes breakfast with a Times columnist to discuss his second year on the job. SAN DIEGO — The other night after the Dodgers lost to the Padres, while the media met with Manager Don Mattingly, screaming could be heard from the nearby coaches' dressing room.

Don Mattingly calls team meeting; now it's up to the Dodgers (08/2012): Are they listening now? Are they?

Yankees Great Don Mattingly Blasts Clemens Trial As ‘Waste Of Money’ (06/2012): Tell us how you really feel, Donnie Baseball. Mattingly ripped the five-year federal investigation into pitcher Roger Clemens on Tuesday as a complete "waste" of resources and money.

Former Yankees star Don Mattingly loves L.A. and his new world (05/2012): Don Mattingly was expecting the question before he'd even picked up the phone. Seems like everyone back East...

Don Mattingly & Ozzie Guillen Rivalry Brewing? (03/2012): If the Miami Marlins were looking for a rival, they may have stumbled upon one after some recent comments by Los Angeles Dodgers manager Don Mattingly.

Don Mattingly Says Angels are Mets to Dodgers' Yankees (02/2012): In search of nostril. Moments before the first full-squad workout of spring training and the launch of another disappointing season for the hapless Los Angeles Dodgers, manager Don Mattingly created s

Dodgers' Don Mattingly hopes he's earned his stripes as a manager (09/2011): As his rookie season comes to a close, Mattingly says he knows he can do the job. It might not matter, however, if the Dodgers switch ownership. From Phoenix — The question heard most often regarding the Dodgers: So how do you think Don Mattingly did as a manager his first year?

Dodgers find a players' manager in Don Mattingly (08/2011): Sitting in the visiting manager's office at Busch Stadium, Don Mattingly called Cardinals manager Tony La Russa to inform him that the Los Angeles Dodgers had made a roster move.

Bill Plaschke: Don Mattingly holds Dodgers together despite on-field struggles (07/2011): Rookie manager gets kudos for not keeping the club focused and not letting it quit in a season marred with turmoil. It is the sturdiest room in a sagging stadium, filled with the calmest voice in a storm of a season.

2011 spring training: Don Mattingly plans to use several Los Angeles Dodgers in (02/2011): Dodgers manager Don Mattingly's early plan is to use a platoon of players to replace Manny Ramirez in left field.