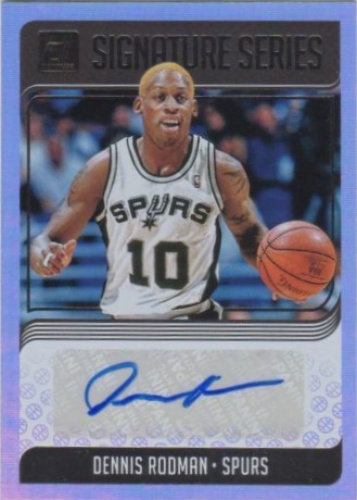 Dennis Keith Rodman (born May 13, 1961) is an American former professional basketball player. Known for his fierce defensive and rebounding abilities, his biography on the official NBA website states that he is "arguably the best rebounding forward in NBA history". Nicknamed "the Worm", he played for the Detroit Pistons, San Antonio Spurs, Chicago Bulls, Los Angeles Lakers, and Dallas Mavericks of the National Basketball Association (NBA). Rodman played at the small forward position in his early years before becoming a power forward. More about Dennis Rodman

Current items with a signature of Dennis Rodman

These are the most current items with a signature of Dennis Rodman that were listed on eBay and on other online stores - click here for more items.

Traded items with a signature of Dennis Rodman

If you're interested in Dennis Rodman Rookie cards you might want to take a look at our sister site that specializes in Basketball Rookie Cards only.

The most expensive item with a signature of Dennis Rodman (Michael Jordan Autographed Jersey UpperDeck& Scottie Pippen & Dennis Rodman JSA) was sold in May 2020 for $11500.00 while the cheapest item (DENNIS RODMAN SIGNED WALK ON THE WILD SIDE BOOK RARE CHICAGO BULLS NBA W/COA) found a new owner for $0.01 in November 2020. The month with the most items sold (164) was May 2020 with an average selling price of $75.00 for an autographed item of Dennis Rodman. Sold items reached their highest average selling price in July 2018 with $519.53 and the month that saw the lowest prices with $2.25 was August 2008. In average, an autographed item from Dennis Rodman is worth $50.00.

Most recently, these items with a signature of Dennis Rodman were sold on eBay - click here for more items.

Dennis Rodman's infamous 48-hour Las Vegas trip during the 1998 NBA Finals is be (08/31/21): Rodman is going to be an executive produce on the feature film

'The Last Dance': Dennis Rodman says Bulls would've 'easily' won fourth straight (05/2020): Rodman thinks the Bulls left titles on the table when they disbanded after winning the championship in 1998

Dennis Rodman's son learned about infamous Las Vegas trip from 'The Last Dance' (04/2020): "I didn't know that you could do that," DJ Rodman said

Is Andre Drummond a max player? NBA scout dishes on 'one of the hardest players (11/2019): Drummond is putting up rebounding numbers not seen since Dennis Rodman, but his offense is most intriguing

The complicated evolution of Dennis Rodman (09/2019): The mercurial Hall of Famer has been homeless, world famous and everything in between. Now, he struggles to be the one thing he never had: a good father.

Madonna Misses "Nothing" About Michigan, Jokes About Ex-Boyfriends Vanilla Ice, (03/2015): Madonna tells Us Weekly that she misses "nothing" about her home state of Michigan, plus reveals which ex-boyfriend (Dennis Rodman or Vanilla Ice) she would prefer to be "trapped on a desert island" with -- get the scoop here!

Who Said It? Dennis Rodman or North Korean Slogan (02/2015): North Korea released 310 new propaganda slogans today, calling for a range of improvements in the isolated country, including providing more food to children and infrastr

Dennis Rodman -- I'm Bringin' Pro Wrestling to North Korea ... Seriously. (09/2014): Dennis Rodman tells TMZ Sports ... his role of unofficial ambassador to North Korea is still going strong -- and now plans to bring WWE-style wrestling to Kim Jong Un country. Rodman was out in L.A. last night when he opened up about his plans…

Dennis Rodman Allegedly Partied With Woman Who Was Drugged (07/2014): Dennis Rodman has been named in a police report this week after a woman said she was drinking and partying with him and a friend and ended up blacking out, with no recollection of the previous night’s events when she …

Dennis Rodman -- In Case You're Wondering ... I'm Not Gay (06/2014): Dennis Rodman wants to make one thing clear ... he is 100 % heterosexual -- but sober? That's not even 17% clear from this strange video of him out in West Hollywood last night. Rodman was loitering chilling outside Hooray Henry's last night…

Dennis Rodman yet to see North Korea leader on trip but says 'game is on' (04/2014): Star said he didn't expect to meet Kim Jong-un on every visit but current trip was for training players for Kim birthday match

Korea 2013 in Review: Psy, Dennis Rodman and Box Office Records (12/2013): A new president, meanwhile, promised support for the media and entertainment industry, which has been looking to strike collaboration agreements with Chinese players. read more

Dennis Rodman Confused By Lamar Odom’s Downward Spiral (08/2013): You know things are bad when Dennis Rodman, of all people, is questioning your life choices . The Worm doesn’t understand why Lamar Odom is going through his current nightmare.

Dennis Rodman Had Himself A Good Time At This Fashion Show (07/2013): Dennis Rodman went to a fashion show in Miami on Monday night, sat in the first row and enjoyed the shit out of himself. Read more...

Dennis Rodman appears in KC as part of a streetball event (06/2013): Ball Up CEO Demetrius Spencer called up former NBA star Dennis Rodman to be guest coach for the most talented streetballers in the KC area. The 10 players faced Ball Up, a nationwide team that celebrates another style of basketball, on Saturday night.

Dennis Rodman Due in Court Today Over Domestic Violence, Child Visitation Issues (04/2013): Dennis Rodman has famously been going to North Korea as a non-appointed ambassador to broker some kind of peace with the United States.But the NBA Hall of Famer is due in a Santa Ana courtroom to...

Did Dennis Rodman Just Change the World? (03/2013): Going to North Korea was the smartest move the famously eccentric former basketball star ever made. Buzz Bissinger on America's latest renaissance man.

Bookworm Dennis Rodman now turns his sights on kids (01/2013): Even Dennis Rodman laughs at the idea. 'Kind of funny, huh?' he said. It's true, though. One of basketball's most outrageous personalities has written a book for kids.

Want To Watch A Bulls Game With Dennis Rodman? (11/2012): Living Social is selling tickets for the "Dennis Rodman Viewing Party Experience" for a chance to watch the Bulls on TV from a sports bar in the West Loop with The Worm himself. [ more › ]

Dennis Rodman -- newly sober wild man lays off the sauce (10/2012): Dennis Rodman’s turned over a new leaf while shooting “All-Star Celebrity Apprentice,” we hear. “It’s been a wake-up call,” a source said of...

Daily Recap: WMU teacher preparation program gets "at risk" grade from state; Pa (08/2012): Here's a look at some of the stories on MLive.com/Kalamazoo today.

PBT: Dennis Rodman authors children's book (07/2012): Maybe he got the idea from Madonna. Dennis Rodman has “authored” a couple of books before. And by authored I mean he spoke to a writer and posed for the cover art. His most recent was titled “I Should Be Dead by now.”

Dennis Rodman - Dennis Rodman Slapped With Restraining Order (06/2012): Former basketball bad boy Dennis Rodman has been ordered to stay away from his ex-wife after allegedly attacking her last month May12 Michelle Rodman obtained a temporary ban against the retired athlete after he allegedly entered her house on 28 May 12...

Kick Off NBA All-Star Weekend By Gambling On A Cruise With Dennis Rodman And 'Hi (02/2012): Can you think of anything more exciting than gambling and drinking with Rodman?

Midday News Links: Dennis Rodman Glams it Up to Play Basketball (12/2011): In other news: Richard M. Daley makes his first public appearance since the death of his wife Maggie. [ more › ]

Detroit Pistons Links: Dennis Rodman says NBA players should 'bow down' (10/2011): “It’s not the players’ fault, it’s the owners’ fault and I think (the players) should give a little bit,” the former 'Bad Boy' said.

Photos: Dennis Rodman celebrates at Club Nikki at Tropicana (08/2011): Our spywitness reported: “Dennis was in a really festive mood, and his outfit reflected it!” The flamboyant personality was decked out in dark denim ...

Dennis Rodman, Winner (05/2011): The Count: A highly detailed analysis of the NBA player's career by a sports-stats blogger makes the case that he was the best rebounder ever, and possibly the most valuable player ever.

Basketball: Dennis Rodman overcome by induction to Hall of Fame (04/2011): Irreverent and outrageous on and off the basketball court, Dennis Rodman admitted he believed his eccentric lifestyle would keep him from being inducted into the Hall of Fame.

Former Pistons star Dennis Rodman draws praise from MLive.com readers (03/2011): Several MLive.com readers responded via Twitter when asked to share their thoughts about Rodman, whose jersey will be retired Friday night by the Pistons.

Dennis Rodman, Jamaal Wilkes head list of 12 finalists for Basketball Hall of Fa (02/2011): Thank you for visiting TwinCities.com-Pioneer Press . We are sorry the article that you requested is no longer available. Please search for this article in our archive search .

Fan starts Dennis Rodman for Hall of Fame Facebook page (12/2010): I think this is exactly what Mark Zuckerberg had in mind in his Harvard dorm room. Use of Facebook for the greater good. A fan of The Worm — not the one at the bottom of a Mescal bottle but Dennis Rodman — has started a a Facebook page to urge inclusion of Rodman in…