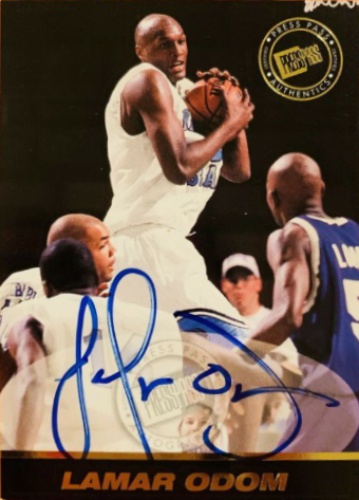 Lamar Joseph Odom (born November 6, 1979) is an American former professional basketball player. As a member of the Los Angeles Lakers in the National Basketball Association (NBA), he won championships in 2009 and 2010 and was named the NBA Sixth Man of the Year in 2011. More about Lamar Odom

Current items with a signature of Lamar Odom

These are the most current items with a signature of Lamar Odom that were listed on eBay and on other online stores - click here for more items.

Traded items with a signature of Lamar Odom

If you're interested in Lamar Odom Rookie cards you might want to take a look at our sister site that specializes in Basketball Rookie Cards only.

The most expensive item with a signature of Lamar Odom (AUTOGRAPH REEBOK 2005-06 LAMAR ODOM LAKERS JERSEY TEAM ISSUED GAME USED SIGNED) was sold in July 2016 for $695.00 while the cheapest item (LAMAR ODOM LOS ANGELES CLIPPERS SIGNED AUTOGRAPHED 5X7 PHOTO lakers heat knicks) found a new owner for $0.01 in July 2015. The month with the most items sold (29) was June 2009 with an average selling price of $11.50 for an autographed item of Lamar Odom. Sold items reached their highest average selling price in October 2020 with $429.00 and the month that saw the lowest prices with $0.01 was July 2015. In average, an autographed item from Lamar Odom is worth $15.50.

Most recently, these items with a signature of Lamar Odom were sold on eBay - click here for more items.

Lamar Odom says Lakers fan gifted him the NBA championship rings he pawned (11/03/22): Odom pawned his two rings years ago to help pay for his hospital bills, and a fan returned them to their rightful owner last month

The head coach Lamar Odom says the Lakers should hire (04/20/22): Former Lakers forward Lamar Odom has a very specific coach in mind for his former team.

Khloé Kardashian Talks Being "Obsessed" With Lamar Odom, but What About French M (04/03/15): Keeping up with Khloé Kardashian's love life could be a hobby in and of itself. It seems she has gotten back together with French Montana for the time being, but while promoting the...

Khloe Kardashian & Lamar Odom: Terrified She’ll Never See Him If They Divorce (02/2015): Over one year since filing for divorce, Khloe has still not officially severed ties with Lamar and sources say it’s because she fears she will never see him again.

Bruce Jenner & Lamar Odom Break Down In Tears In New Scene For ‘KUWTK’ (01/2015): Lamar and Bruce have always had a tight bond.

Khloe Kardashian Wants To Have ‘Fun’ In 2015: Message To Lamar Odom? (12/2014): There is no denying that Khloe Kardashian had a crazy year, but the reality star revealed on Dec.

Khloe Kardashian Tells Kris Jenner She Still Wants To Be Married To Lamar Odom (11/2014): Khloe Kardashian "would still be married to Lamar [Odom]" if she had her own way.

Lamar Odom reportedly refuses to divorce Khloé Kardashian. (10/2014): The 'Keeping Up with the Kardashians' star filed court documents to legally dissolve her four-year marriage to the former NBA star in December after months of rumours he was addicted to cocaine and cheated on her with multiple women, but he has yet to respond to her petition.

Lamar Odom Just Can’t Catch A Break (07/2014): Lamar Odom has had a rough year. It seemed like he had recently put his divorce from Khloe Kardashian behind him and was looking forward to making an NBA comeback. Sources close to Lamar claimed that he was very focused …

Khloe Kardashian Betrayed By Lamar Odom Again — New Report (03/2014): Khloe has reportedly been in constant contact with Lamar despite their split but a shocking report on VH1′s ‘The Gossip Table’ claims he’s wronged her all over again.

Khloé Kardashian Instagrams "Forever Is an Empty Promise" as Lamar Odom Enjoys G (12/2013): Khloé Kardashian and Lamar Odom are both moving on following the E! star filing for divorce from her husband earlier this month. The 29-year-old beauty took to Instagram on...

Lamar Odom is reportedly planning to expose a sex tape featuring Khloe Kardashia (11/2013): The disgraced basketball player's marriage to the TV personality has been on the rocks since allegations of infidelity and drug abuse surfaced earlier this year, and it has been alleged that Kris Jenner has made Khloe thrash out details of their divorce with the family's attorney.

Lamar Odom gets FULL support from his family after arrest! (08/2013):   Lamar Odom's cousin Michael Mercer has offered his full support after the basketball player was arrested on suspicion of driving under the influence in Los Angeles yesterday. Michael told Celebuzz, "Of course, all of us in the family are upset about what's going...

Lamar Odom Doesn’t Care What The Clippers Think Of Khloe Kardashian (07/2013): Lamar faces daily criticism about his marriage to Khloe, but he doesn’t expect that type of heat from his former teammates!

Lamar Odom's birthday surprise for Khloe (06/2013): Lamar Odom surprised Khloe Kardashian with flowers on her birthday.The couple tied the knot after a whirlwind courtship in 2009 and romantic Lamar...

Rumor Has It Khloe Kardashian Is Leaving Lamar Odom (05/2013): There’s another Black man rumored to have miffed the matriarch of the Kardashian family. The National Enquirer claims that Kris Jenner is demanding that Khloe Kardashian give her husband Lamar Odum the boot. More »

Lamar Odom Wants to Apologize (03/2013): LA Clippers player Lamar Odom wants to apologize to Mark Cuban for his awful season while he was a Maverick. …

Khloe Kardashian Puts On A Brave Face At Family Breakfast And Lamar Odom's Baske (02/2013): The Reality Star Managed To Raise A Smile Despite Her Career Blow

Clippers' Lamar Odom hurts ankle in game against Suns (12/2012): The forward says he was injured in the first quarter when Phoenix forward Jared Dudley pushed him, which caused Odom to step on Dudley's foot. PHOENIX — Lamar Odom sat in his chair after the game, his sprained left ankle in a bucket of ice.

Khloe Kardashian says she and husband Lamar Odom, Scott Disick and Kendall Jenne (11/2012): Khloe Kardashian appeared on The Ellen DeGeneres Show on Wednesday, where she discussed her famous family’s annual Christmas card and having to be photoshopped in. read more

Lamar Odom gets back in the game (10/2012): Forward had been sitting because of a bone bruise in his knee. Matt Barnes sits because of suspension. For the first time since an exhibition game Oct. 14 in China against the Miami Heat, Lamar Odom played for the Clippers.

Khloe Kardashian, Lamar Odom Celebrate Their Three-Year Wedding Anniversary (09/2012): The Couple Got Engaged Two Weeks After Meeting At A Nightclub In Los Angeles

Lamar Odom Headed Back To Los Angeles Following Trade to Clippers; Kardashians R (06/2012): After a six-month run on the Dallas Mavericks, Lamar Odom will be returning to Los Angeles to play for the Clippers, and the basketball star's wife (and her famous family) couldn't be more excited for his return.

Will Khole Kardashian Be Resented By Lamar Odom If He Becomes A Reality TV Star? (04/2012): That's What A Relationship Expert Thinks

Lamar Odom Is Off To Turkey (11/2011): Odom will be paid around $2 million to play alongside Deron Williams for the Istabul-based team until the NBA lockout is over. But the big question is this: Will some combination of Khloe, Kim, and Kourtney "take" Istanbul?

Watch! Lamar Odom Pays Special Tribute to Deceased Cousin (07/2011): Lamar Odom is a basketball star and, thanks to his hit E! show, a big-time reality TV star, too. So, you can't really blame the paps surrounding him and his brother-in-law Robert...

Lakers enter NBA draft with Lamar Odom trade rumors (06/2011): Lamar Odom has become the Lakers' hot commodity to move, but Minnesota reportedly turned down a trade offer that would have sent the NBA's sixth man of the year to the Timberwolves in exchange for the No. 2 overall pick in Thursday's draft.

Lamar Odom adapts to starter's role in place of Andrew Bynum rather quickly (03/2011): The Lakers express appreciation for Lamar Odom

Khloé Kardashian, Lamar Odom agree on the ‘right scent’ for Unbreakable (02/2011): The duo finally found their magic elixir, which mixes notes like dark chocolate, nutmeg, cedarwood, sandalwood and jasmine - plus a touch of vanilla.

Los Angeles Lakers' Lamar Odom denies reality TV deal with wife (12/2010): Lamar Odom said Friday he hasn't decided whether he is going to take his relationship to the television screen.