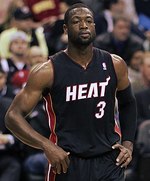 Dwyane Tyrone Wade Jr. (/dweɪn/ dwayn; born January 17, 1982) is an American former professional basketball player. Wade spent the majority of his 16-year career playing for the Miami Heat in the National Basketball Association (NBA). After a successful college basketball career with the Marquette Golden Eagles, Wade was drafted fifth overall in the 2003 NBA draft by the Heat. In his third season, Wade led the Heat to their first NBA Championship in franchise history and was named the 2006 NBA Finals MVP. At the 2008 Summer Olympics, Wade led the United States men's basketball team, commonly known as the "Redeem Team", in scoring and helped them capture the gold medal. In the 2008–09 season, Wade led the league in scoring and earned his first NBA scoring title. With LeBron James and Chris Bosh, Wade helped guide Miami to four consecutive NBA Finals from 2011 to 2014, winning back-to-back championships in 2012 and 2013. After playing for the Chicago Bulls and the Cleveland Cavaliers, Wade finished his playing career with Miami in 2019. A 13-time NBA All-Star, Wade is Miami's all-time leader in points, games, assists, steals, shots made, and shots taken. More about Dwayne Wade

The most expensive item with a signature of Dwayne Wade (Lebron James Dwayne Wade UDA Upper Deck dual Signed Autograph #50 with COA) was sold on eBay in March 2020 for $4500.00 while the cheapest item (Dwayne Wade Signed Autographed Miami Heat Hat Cap) found a new owner for $0.01 in June 2019. The month with the most items sold (47) was December 2009 with an average selling price of $85.00 for an autographed item of Dwayne Wade. Sold items reached their highest average selling price in February 2020 with $574.99 and the month that saw the lowest prices with $8.99 was October 2019. In average, an autographed item from Dwayne Wade is worth $68.01.

Current items with a signature of Dwayne Wade

These are the most current items with a signature of Dwayne Wade that were listed on eBay and on other online stores - click here for more items.

Traded items with a signature of Dwayne Wade

If you're interested in Dwayne Wade Rookie cards you might want to take a look at our sister site that specializes in Basketball Rookie Cards only.

Most recently, these items with a signature of Dwayne Wade were sold on eBay - click here for more items.

Andy Cohen and Dwyane Wade Are Now Casually Swapping Dad Tips Blog (02/22/19): Bravo Cast and Insiders talk about what happened on the show. Get the backstory, reactions and latest updates from the cast and more.

All-Stars give Dwyane Wade farewell fete (02/19/19): CHARLOTTE, N.C. - Dwyane Wade is adamant that the end of this season will be the right time for him to bid farewell to the game of basketball. The game of basketball spent the weekend disagreeing with him. Wade's final All-Star appearance as a player is complete, a four-day trip that had testimonial

His last All-Star complete, Wade on to playoffs (02/19/19): Dwyane Wade is adamant that the end of this season will be the right time for him to bid farewell to the game of basketball.

Dwyane Wade And Dirk Nowitzki Soak It All In At What Could Be Final All-Star Gam (02/18/19): The two legends were given a warm welcome by the crowd. Dwyane Wade and Dirk Nowitzki are on the fast track to the Basketball Hall of Fame and there is really no disputing that. Both players have had some incredible careers that are winding down to the end. Wade has made it clear that this is his fi

Wade Turns Focus to Playoff Push After All-Star Sendoff (02/18/19): Wade's final All-Star appearance as a player is now complete after he scored seven points in helping Team LeBron get a 178-164 victory over Team Giannis.

All-Stars give Dwyane Wade farewell fete (02/2019): CHARLOTTE, N.C. - Dwyane Wade is adamant that the end of this season will be the right time for him to bid farewell to the game of basketball. The game of basketball spent the weekend disagreeing with him. Wade's final All-Star appearance as a player is complete, a four-day trip that had testimonial

Dwayne Wade hurt as Cavs beat Heat in NBA (04/2015): LeBron James has taken his former NBA team to the cleaners in Cleveland and, to make matters worse, Miami star Dwayne Wade limped off with a knee injury.

Isaiah Thomas Outduels Dwayne Wade, Helping Celtics Beat Heat (03/2015): The Celtics' explosive guard took over in the fourth quarter again, shaking off a hard fall that left him with a bruised elbow and back to lead Boston to a big road win.

Miami Heat Player Dwayne Wade's Injury and Absence Affects Team's Performance (01/2015): Dwayne Wade got injured during the third quarter of the team's game against Milwaukee Bucks, which affected their performance.

Dwayne Wade leads Miami Heat past Brooklyn Nets, 95-91 (12/2014): Congratulations! Your weather is set to . You can change the location at any time. Don't have an account?

Chris Bosh, Dwayne Wade and Danny Granger to Lead Miami Heat (09/2014): The Miami Heat has just started its training for the 2014-15 NBA season and rumors about its players are flying off the handle. With LeBron James gone to Cleveland Cavaliers, how will the Heat fare without him?

Bring On The Union Puns: Gabrielle Union Ties The Knot With Dwayne Wade (08/2014): We nominate these two for most beautiful celeb newlyweds.

NBA: Dwayne Wade, Chris Bosh opt out of Miami Heat deals (06/2014): MIAMI — The “Big 3” have all made the same big decision. And now, it’s up to the Miami Heat to keep their star trio happy.

Dwayne Wade Wearing Bad Boys Socks [PHOTO] (05/2014): When your toughness is challenged by a player on the opposing team, I'm pretty sure it just adds fuel to the fire for a professional athlete.

Dwayne Wade Talks About His New Son (12/2013): NBA star Dwayne Wade, who has made no secret about how much he values fatherhood, confirms that he fathered a third son during a temporary… via Emag.co.uk

Ebony Pays Tribute to Trayvon Martin With Covers Featuring His Family, Spike Lee (08/2013): Ebony is doing its part keep Trayvon Martin's memory alive. For its September issue, the magazine has published a collection of four covers that pays tribute to the slain teen,...

Dwayne Wade Ex, Funches-Wade, Receives $5M in Divorce Settlement, But Must Keep (07/2013): Dwyane Wade's ex will receive $5 million in a divorce settlement from her NBA star ex-husband, according to reports.