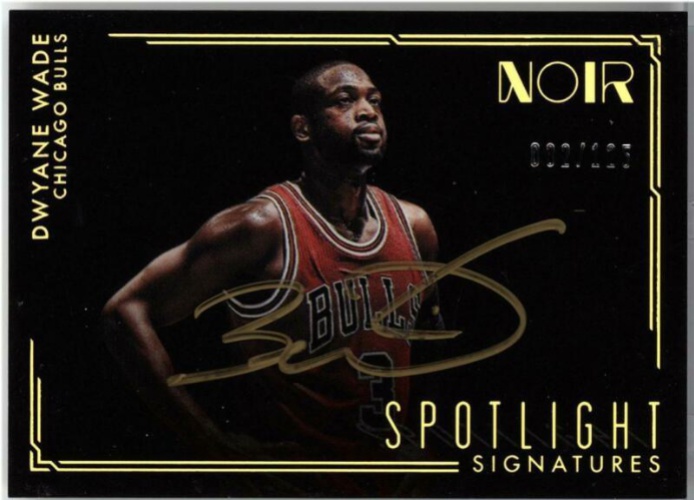 Dwyane Tyrone Wade Jr. (/dweɪn/ dwayn; born January 17, 1982) is an American former professional basketball player. Wade spent the majority of his 16-year career playing for the Miami Heat in the National Basketball Association (NBA). After a successful college basketball career with the Marquette Golden Eagles, Wade was drafted fifth overall in the 2003 NBA draft by the Heat. In his third season, Wade led the Heat to their first NBA Championship in franchise history and was named the 2006 NBA Finals MVP. At the 2008 Summer Olympics, Wade led the United States men's basketball team, commonly known as the "Redeem Team", in scoring and helped them capture the gold medal. In the 2008–09 season, Wade led the league in scoring and earned his first NBA scoring title. With LeBron James and Chris Bosh, Wade helped guide Miami to four consecutive NBA Finals from 2011 to 2014, winning back-to-back championships in 2012 and 2013. After playing for the Chicago Bulls and the Cleveland Cavaliers, Wade finished his playing career with Miami in 2019. A 13-time NBA All-Star, Wade is Miami's all-time leader in points, games, assists, steals, shots made, and shots taken. More about Dwyane Wade

Current items with a signature of Dwyane Wade

These are the most current items with a signature of Dwyane Wade that were listed on eBay and on other online stores - click here for more items.

Traded items with a signature of Dwyane Wade

If you're interested in Dwyane Wade Rookie cards you might want to take a look at our sister site that specializes in Basketball Rookie Cards only.

Most recently, these items with a signature of Dwyane Wade were sold on eBay - click here for more items.

Heat's Haslem delivers food to hospitals as tribute (04/30/20): Longtime Miami forward Udonis Haslem paid visits Wednesday to two hospitals and a fire station with food from a restaurant he owns with Dwyane Wade, saying he had a personal connection to each and wanted to show his appreciation.

Aaron Gordon says there are no bad feelings with Dwyane Wade over Dunk Contest d (04/29/20): Aaron Gordon talked to Dwyane Wade about the track and Wade was fine with it

Miami's hottest postgame spot? The D-Wade jersey swap (04/09/20): Dwyane Wade's nightly ritual quickly took on a life of its own during the future Hall of Famer's "One Last Dance."

Miami Heat to celebrate Dwyane Wade's jersey retirement over three days between (01/2020): Wade retired at the end of the 2018-19 season after spending 15 seasons with the Miami Heat

Jimmy Butler's week: A baby, a Heat debut and a first win (10/2019): Jimmy Butler's first official week with the Heat was certainly one he won't forget. Getting the distinction of being the last Miami starter to be introduced - a role that Dwyane Wade held for the majority of his Heat tenure, the honor that typically goes to the player deemed to be the face of

Dwyane Wade on Serena Williams: The Champion Who Won’t Give Up (04/2015): Williams is on a mission — and how amazing that we all get to witness it

Goran Dragic and Dwyane Wade, the NBA’s Two Most Efficient Attackers (03/2015): The Miami Heat are looking to qualify for the NBA postseason despite the injury bug teeing off on them like it’s the Hunger Games but the good news is their relatively healthy starting backcourt makes up the league’s most potent attacking duo with […]

'Karaoke Fiend' Gabrielle Union Calls Husband Dwyane Wade 'My Little Honey Boo B (02/2015): Jimmy Fallon and Josh Duhamel backed up the Being Mary Jane actress as she belted out some of her go-to tunes on Tuesday

Dwyane Wade out with hamstring injury (01/2015): Miami, FL (SportsNetwork.com) - Miami Heat guard Dwyane Wade, who is dealing with a right hamstring strain, said Thursday that there is no timetable set for his return.

Dwyane Wade Is Not Dead Yet (12/2014): Dwyane Wade's Christmas day game may end up being his signature performance of the season, leading an undermanned Heat team without Chris Bosh and Josh McRoberts to a win over LeBron's Cavs. Wade poured in 31 points, 5 assists, 5 rebounds and an emphatic-as-hell block on Kevin Love. Read more...

Dwyane Wade Trolls Himself By Videobombing His Own Interview (10/2014): The Miami Heat have mastered the art of videobombing over the last few years, and...

Dwyane Wade Says LeBron Is His New Favorite Opponent (07/2014): One thing that Dwyane Wade has never shied away from is a challenge. It’s the attitude that has remained with him from blacktops of Chicago through his days at Marquette University to his 11 years with the Miami Heat.

LeBron and Dwyane Wade Laughed About Blowing in People's Ears (05/2014): A “defensive tactic.”

Dwyane Wade steps in, steps up, providing lift to Heat (04/2014): Dwyane Wade is at a point in his career where he appreciates the small steps, especially when any strides previously had been so painful.

Heat's Dwyane Wade, Ray Allen likely out versus Raptors (03/2014): The Miami Heat are once again expected to play short-handed Monday against the Toronto Raptors.

Q&A: Victor Oladipo on Dwyane Wade comparisons, drawing inspiration from deaf si (01/2014): Individually, the former Hoosier has been up and down. Oladipo is clearly one of the league's best rookies and is arguably the surest bet to succeed, but he isn't the ROY frontrunner he was before the season started.

Gabrielle Union Celebrates 41st Birthday Bash With Dwyane Wade (10/2013): Fact: Gabrielle Union doesn't age. Just a few days after posting a stunning bikini photo (seriously, that body is on point!), the Bring It On actress celebrated her 41st birthday with...

Dwyane Wade Says He Removed Himself From Recruiting Free Agents to the Heat This (08/2013): While he was (obviously) instrumental in bringing LeBron James (and others) to Miami, Dwyane Wade said the Heat’s limited cap space led to him avoiding the recruitment process this offseason.

Dwyane Wade: Being a dad is a privilege (07/2013): When I became a single father, I joined the increasing number of dads who value the importance of raising their children.

NBA playoffs 2013: Dwyane Wade's struggles undermining Miami Heat title hopes (05/2013): Miami has been penciled in as the presumed NBA champion for months, but this late stage of the playoffs has provided a greater test for the Heat than anticipated.

Ethan Skolnick: Dwyane Wade scores 28 in return as Heat stop Bucks in OT, 113-10 (11/2012): It would have been an appropriate conclusion, considering the encouraging way that Dwyane Wade had played in his return from a two-game absence.

Dwyane Wade calls Rondo flagrant 'a punk play' (10/2012): The race between President Obama and Mitt romney is now a statistical dead heat ... Emergency crews in Ottawa County were able to rescue a hunter caught in a ...

Miami Heat plans for Dwyane Wade’s future (09/2012): Dwyane Wade is 30 now — in NBA terms, an old 30. After knee surgery and other ailments, the Heat hopes more rest will extend his career.

Why Is Gabrielle Union Not Schooling Dwyane Wade On How To Dress? (08/2012): Time For A Personal Shopper!

Dwyane Wade on ‘The Tonight Show With Jay Leno’ (07/2012): DWade talks about the Heat's championship, promotes his new book.

Dwyane Wade Considers Heat/Celtics Matchup ‘Inevitable’ (05/2012): As far as Dwyane Wade is concerned, Boston and Miami were always on a collision course. And now, the inevitable is here , at last. From the AP : “In 2010, Boston ousted Dwyane Wade in the first round and LeBron James in the second round.

N.B.A. Playoffs: Dwyane Wade Takes Advantage of Chances (04/2012): Dwyane Wade, who figured the Knicks’ focus on LeBron James would leave openings for him, scored 25 points for the Heat.

Nephew of Dwyane Wade is shooting victim (03/2012): One of the people wounded in a Gresham convenience store shooting that left one man dead and five others hurt is the nephew of Miami Heat basketball star Dwyane Wade, according to a statement by the Chicago native.

All-Star controversy involving Dwyane Wade, LeBron James reinforce Heat as leagu (02/2012): Dwyane Wade broke an NBA code. LeBron James passed on a last-second shot. Thank you both, gentlemen. It was getting a little too quiet in this Heat season. Welcome back, controversy. We missed you.

The NBA Created A Twitter Handle To Justify Dwyane Wade's Game-Winning Shot (12/2011): The league office created the Twitter Handle, @NBAOfficials , Thursday afternoon which will, according to the webpage, tweet rule clarifications and updates.

Dwyane Wade has dancing cameo in Cameron Diaz film (11/2011): Dwyane Wade can dance? Is he better than Metta World Peace? He apparently was good enough — or at least famous enough — to get a dancing role in a movie. That nugget came out in a Palm Beach Post story about how busy Wade had been this offseason. Into August. A GQ photo shoot…

Dwyane Wade Gets A Grip (09/2011): The Miami guard talks about Court Grip, a product marketed to help improve court traction.

Dwyane Wade, fashion impresario on pages of VMAN (08/2011): Dwyane Wade is serious about fashion. And you can get a look at fashionista Wade in the pages of VMAN Magazine starting Thursday when the magazine lands on your doorstep. What, you don’t subscribe? Well, I guess you can get it at a newsstand, but we need to talk. Anyway, there was a preview at…

LeBron James And Dwyane Wade Ditched Chris Bosh’s Crazy Bachelor Party (06/2011): As US Weekly would say: These guys were the best buds on the sands of South Beach a year ago, but now their relationship is most definitely on the rocks.

Dwyane Wade, LeBron James come alive in time to put Heat up 1-0 on Mavs (05/2011): After five grueling games against the Chicago Bulls in the Eastern Conference finals, the Miami Heat thought they were done with ground-and-pound basketball.

Video: Dwyane Wade misses practice (04/2011): Video: Marc Narducci of the Inquirer reports the Heat's Dwyane Wade missed practice on Sunday in Miami because of migraines. Kate Fagan was, until recently, the all-time leading three-pointer shooter in the University of Colorado women’s basketball program.

Video: Dwyane Wade's best dunk ever or runner-up? (03/2011): “If only four teams are giving up less ppg than the Heat then I have to think as a whole the system is working. Yes, it may lead to 2nd chance points, but what is more important less second chance points or less total points per game?

Video: Dwyane Wade can hit literally any shot (02/2011): Dwyane Wade, basketball magician. As proof, we submit this video from last night’s Heat destruction of the Kings. Falling, flip it up and it falls. Pretty much, that’s how the entire night went for the Heat — whatever they did worked and the Kings stood around looking dumbfounded.

Miami's Dwyane Wade has bruised wrist, is day-to-day (01/2011): MIAMI -- The ailing Miami Heat may not stay that way much longer.

Dwyane Wade's 45 power Heat past Rockets 125-119 (12/2010): Challenged early, the Heat pushes back behind 45 points from Dwyane Wade to extend their road winning streak to 10, becoming the first NBA team to win 10 in a row on the road in the same calendar month.