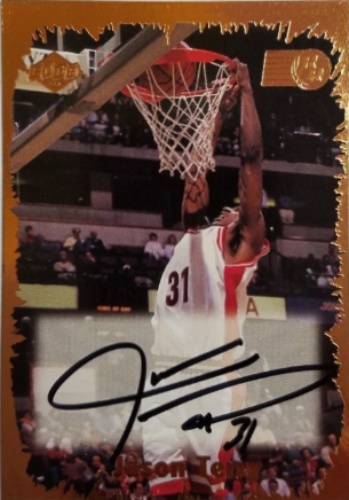 Jason Eugene Terry (born September 15, 1977) is an American former professional basketball player and current assistant coach for the Utah Jazz of the National Basketball Association (NBA). He played 19 seasons in the NBA as a combo guard and is nicknamed "The Jet". With the Dallas Mavericks, Terry won the NBA Sixth Man of the Year Award in 2009 and an NBA championship in 2011. As of March 2020, Terry has made the seventh-most three-point field goals in NBA history. More about Jason Terry

Current items with a signature of Jason Terry

These are the most current items with a signature of Jason Terry that were listed on eBay and on other online stores - click here for more items.

Traded items with a signature of Jason Terry

The most expensive item with a signature of Jason Terry (Jason Terry 2019/20 Spectra Auto Autograph Nebula NBA Champions #1/1 Dallas TatE) was sold in July 2020 for $815.00 while the cheapest item (JASON TERRY HAND Signed Autographed 8x10 ARIZONA Photo) found a new owner for $0.01 in March 2013. The month with the most items sold (46) was June 2011 with an average selling price of $10.49 for an autographed item of Jason Terry. Sold items reached their highest average selling price in October 2015 with $237.50 and the month that saw the lowest prices with $0.99 was February 2019. In average, an autographed item from Jason Terry is worth $9.50.

Most recently, these items with a signature of Jason Terry were sold on eBay - click here for more items.

Jazz sign Italy's Fontecchio, add Terry as asst. (07/18/22): The Jazz have agreed to a two-year, $6.25 million guaranteed deal with Italian forward Simone Fontecchio, according to his agent. Sources also told ESPN that Utah has agreed to a deal to hire Nuggets G League coach Jason Terry to the staff.

Posted Up - Jason Terry on black coaches in NBA - ‘We are more than capable’ (05/2022): In the latest episode of the Yahoo Sports podcast, senior NBA insider Chris Haynes spoke with longtime NBA veteran and current Grand Rapids Gold head coach Jason Terry about the influx of black head coaches in the NBA. Hear the full conversation on the Posted Up with Chris Haynes podcast. Subscribe

Celtics Lab 92: Talking about Boston’s contender status, KG’s jersey retirement (02/2022): The JET joined us to weigh in on the Celtics of today, reflect on his time playing with KG, and what he is up to now as a coach and spokesperson for a virtual personal trainer service.

Former guard Terry gets G League coaching job (08/2021): Jason Terry, who played 19 seasons in the NBA, has been hired as the new head of the Grand Rapids Gold in the G League.

Kobe and Gianna Bryant’s Bond Was Made of Love and Basketball (02/2020): The former N.B.A. guard Jason Terry last saw Kobe coaching Gianna’s Mamba Academy team a week ago. Terry and his girls’ team were supposed to face them the day of the helicopter crash.

Jason Terry: What happened to Nets’ contender setup? (01/2015): Jason Terry has seen plenty during his 15-plus years in the NBA. But even a veteran sage such as Terry couldn’t help but shake his head at what has transpired in...

Harden scores 34, 37-year-old Jason Terry adds 18 to lead Rockets over Bucks 117 (11/2014): MILWAUKEE — Missing three starters, the Houston Rockets turned to its most dominant player and an aging veteran for help against the Milwaukee Bucks on Saturday night.

Jason Terry (06/2014): Jason Terry weighs in on the Tyson Chandler trade and other NBA topics.

Jason Terry Says the Brooklyn Nets are in ‘Desperation’ Mode (11/2013): The Nets were supposed to be a juggernaut this season, but so far, they have looked very ordinary. Jason Terry thinks it’s time to get desperate , while his teammates continue to say that things will work out in the long run.

New team, new tattoo — Jason Terry getting Nets tattoo (09/2013): Back in the summer of 2010, then Maverick Jason Terry got the Larry O’Brien trophy tattooed on his arm… and we all laughed. Dallas was a good team but a whole lot of things needed to break their way to win the title. Pretty much everything broke their way and a Dallas team that melded…

Jason Terry Finally Delivers Clutch Performance Celtics Have Been Waiting on for (04/2013): BOSTON – Jason Terry has a summer job waiting for him whenever the NBA season ends. The veteran guard, who has expressed a desire to coach in the NBA once he is finished playing, has an AAU coaching gig awaiting him. As great as that experience would be for his second career, for now Terry [...]

Jason Terry has fond memories of his time in Dallas but was disappointed how it (03/2013): DALLAS — To make a point, or because he is

Jason Terry lifts streaking Celtics (02/2013): BOSTON - Jason Terry had missed six consecutive 3-point attempts, but during a timeout late in the third overtime Sunday night he told Paul Pierce he was going to make his next one.

Jason Terry Will Not Stop Shooting As Team Sticks With Sharpshooter Through Good (12/2012): Jason Terry knows he can’t hit ‘em all, although he is always shocked, any time he puts up a shot, if it does not go in. He also knows he can’t miss them all, either, no matter how much he tested that theory on Friday. “After maybe the third shot, I was like, what’s going [...]

Jason Terry ready to provide spark off the Celtics’ bench (09/2012): The 2009 NBA Sixth Man of the Year award winner should provide offense as the leader of the team’s second unit this season.

Jason Terry hopes Mavericks retire his jersey (08/2012): By Mike Foss, USA TODAY Jason Terry had a pretty good run with the Dallas Mavericks: Eight seasons, two NBA finals trips, and a title. So it was a tough move for the 34-year-old Terry when he signed a $15 million three-year deal with the Boston Celtics in July. “What we did in my eight-year [...]

Jason Terry broke all the brooms in his house (05/2012): Jason Terry and the Dallas Mavericks hope to avoid a series sweep by the Oklahoma City Thunder and extend their season one game at a time.

Jason Terry trying to show he deserves new contract with Mavericks (03/2012): The guard hopes he's making a case for a new deal.

Jason Terry auctioning off his championship ring for charity (01/2012): Jason Terry doesn’t need a Dallas Mavericks championship ring. If he ever wants to be reminded of the title he was key to winning, he can just look at his right bicep. So Terry is going to take his ring and raffle it off for charity, reports the Star-Telegram. Sort of. He’s ordered a second…

NBA's best bench players: No. 1 Jason Terry (09/2011): Almost everybody who has played basketball since grade school wants to be a starter. But in the NBA, even quality players must be resigned to coming off the bench.

NBA shooting guard rankings: No. 6 Jason Terry (07/2011): It's clearly a two-man race to determine the top two-guard in the NBA.

Jason Terry Intends to Outplay Thunder Bench By Himself (05/2011): The Western Conference Finals begin tonight in Texas, pitting the upstart OKC Thunder against the veteran, well-rested Dallas Mavericks. Star power in the matchup is of the high-wattage variety, but bench play may ultimately decide the winner of the series.