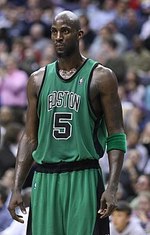 Kevin Maurice Garnett (born May 19, 1976) is an American former professional basketball player who played for 21 seasons in the National Basketball Association (NBA). Known for his intensity, defensive ability, and versatility, Garnett is considered one of the greatest power forwards of all time. He is one of four NBA players to win both the Most Valuable Player and the Defensive Player of the Year awards. In high school, Garnett was a 1995 McDonald's All-American at Farragut Career Academy and won a national player of the year award. He entered the 1995 NBA draft, where he was selected with the fifth overall pick by the Minnesota Timberwolves and became the first NBA player drafted directly out of high school in 20 years. More about Kevin Garnett

Current items with a signature of Kevin Garnett

These are the most current items with a signature of Kevin Garnett that were listed on eBay and on other online stores - click here for more items.

Traded items with a signature of Kevin Garnett

If you're interested in Kevin Garnett Rookie cards you might want to take a look at our sister site that specializes in Basketball Rookie Cards only.

Most recently, these items with a signature of Kevin Garnett were sold on eBay - click here for more items.

Kevin Garnett says his dream is to bring the SuperSonics back to Seattle (04/09/20): The future Hall of Fame inductee wants the franchise reactivated

Kevin Garnett calls Timberwolves owner Glen Taylor a 'snake' (04/07/20): Garnett's No. 21 has yet to be retired in Minnesota

Celtics reveal they'll retire KG's No. 5 next season (02/14/20): With a surprise video and with former coach Doc Rivers on hand, the Celtics revealed Thursday night that they will retire Kevin Garnett's No. 5 jersey next season.

Celtics legend Kevin Garnett says Kyrie Irving did not have the 'cojones' to pla (12/03/19): Garnett is the latest former Celtics player to call out Irving for unceremoniously leaving Boston

Kevin Garnett wants to 'light fire' under Andrew Wiggins, tells him he's mad at (02/2019): Welcome to the Friday edition of The Cooler, where certain people will always cause me to listen. Let's get to it: *Timberwolves legend Kevin Garnett recently returned to Minnesota for a TNT feature in which he sat down with Karl-Anthony Towns, Andrew Wiggins and Ryan Saunders. It was an interesting

The Kevin Garnett mold: A prototype for modern-day NBA forwards (12/2018): How the NBA's most wanted archetype of forwards who can score, dribble and defend, is a style resembling that of Kevin Garnett

Gotham: Celtics will aggressively pursue all options (05/2015): “At the same time, you can’t expect another Kevin Garnett deal to materialize. It’s rare when something like that happens, when a player of that magnitude becomes available. All you can do is put yourself in position, so if those opportunities make ...

Timberwolves: With Kevin Garnett out, there's no buzz in loss to Raptors (04/2015): Remember when Kevin Garnett's homecoming created a buzz?

Kevin Garnett revitalizes Timberwolves in debut win (02/2015): MINNEAPOLIS — Jeff Munneke's title with the Minnesota Timberwolves is vice president of fan experience, but it might as well be "minister of patience." Munneke has worked for the Wolves in various capacities since their inception 26 years, exposing him to lots of bad basketball and fan apathy.

Nets notes: Kevin Garnett sits (12/2014): It was Garnett’s fifth missed game of the season. All five have been on the second leg of a back-to-back.

Joakim Noah: ‘Kevin Garnett tried to bite me — it’s unbelievable’ (11/2014): Kevin Garnett isn’t above anything to try to get an edge — even pretending to bite an opponent. During Sunday’s 102-84 loss to the Bulls, the Nets’ forward was caught...

Nets rewind: This Kevin Garnett version is more like it (10/2014): Here are three thoughts on the Nets’ 121-105 blowout loss to the Celtics Wednesday night in Boston in their season opener: 1. There wasn’t much that went right for the...

Lionel Hollins: ‘All reports that I have’ say that Kevin Garnett will be returni (08/2014): Message remains consistent with what we've heard for the past couple of months.

Robb: A Look Back At 2007’s Kevin Garnett Trade (07/2014): As the Red Sox seemingly deal away half of their roster, the timing is perfect for Celtics fans to take a walk down memory lane and look back at when the Celtics set off their own set of fireworks.

Brooklyn Nets’ Kevin Garnett returns to Toronto where NBA career began as teenag (04/2014): Garnett went on to become a star: an NBA champion, an MVP an Olympic champion and an all-star

Celtics should retire Kevin Garnett's number (01/2014): It's not a slam dunk, but Kevin Garnett has done enough to earn a permanent place in the rafters.

Kevin Garnett Swears At Refs, Fan Tries To Shield Younger Fan From Hearing [Vide (12/2013): Complaining to the refs about a call that is made on the court is something that Kevin Garnett has been known for doing throughout his career. He has certainly had plenty to complain about this season after joining the Brooklyn …

Kevin Garnett, Paul Pierce go to Brooklyn Nets in megadeal (06/2013): By CAROLINE LEE, UPI.com The Nets have negotiated a huge deal Thursday with the Celtics to take Kevin Garnett and Paul Pierce.

Kevin Garnett Says Jared Sullinger is Not in the NBA’s ‘Agenda’ (01/2013): Boston Celtics rookie big man Jared Sullinger wasn’t selected for the All-Star “Rising Stars” extravaganza. According to Kevin Garnett, the NBA must have excluded his teammate from their secret “agenda” . Of course.

Kevin Garnett on Nets-Celtics fight: ‘This ain’t the Girl Scouts’ (11/2012): Doc Rivers wants the Boston Celtics to be tough — not violent. The message came too late for Rajon Rondo

Kevin Garnett Snubbed Ray Allen In First Game As Opponents (10/2012): If anybody wasn't sure how Kevin Garnett felt about Ray Allen leaving the Boston Celtics to play with LeBron James and Co. on the Miami Heat, just check the video below. KG is not a happy camper.

Ray Allen on Kevin Garnett’s remarks: ‘That’s a shame’ (09/2012): “That’s a shame,” Allen said. “I’m a good person to talk to on the phone. … I’ve been in weird trade situations the last few years. You always felt you had one foot in and one foot out, so I can’t worry about it.”

Kevin Garnett, Celtics close to new deal (06/2012): Reports surfaced Saturday that Garnett had not only decided to come back to Boston, but will sign a three-year contract that would mean the final eight years of what will be a 20-year, Hall of Fame career will be in Boston.

Hawks rookie takes shot at Kevin Garnett (04/2012): ATLANTA - They say it takes one to know one. In that case, perhaps no one is better qualified to assess an opponent's...

Kevin Garnett shows he has an edge over Timberwolves' Kevin Love (03/2012): The debate before Friday night's game at Target Center was whether Kevin Garnett in his prime or Kevin Love...

'BAR FIGHT!': Watch Kevin Garnett Lose His Mind In A Post-Game Interview (01/2012): The Celtics finally got a quality win last night, beating the Magic 91-83 on national TV. This caused Kevin Garnett to become unhinged from reality and yell, "Bar fight!" at Craig Sager over and over again in the post-game interview.

Is Kevin Garnett of the Boston Celtics partly to blame for NBA labor impasse? (10/2011): Look in your basketball dictionary under "intensity," and you're likely to see a photograph of Boston Celtic Kevin Garnett. The future Hall-of-Famer is known for more than his statistics.

"It has been a journey." - Kevin Garnett (05/2011): We're just a few sleeps away from the start of the NBA Finals, the capper to what has been a tremendous regular season, which was only outdone by a more compelling playoff.

Slamadaday: Kevin Garnett On Ronny Turiaf (03/2011): Anything is possible!!! Even better live.

Kevin Garnett lets guard down for a day (02/2011): LOS ANGELES -Kevin Garnett was wearing something that differs from his public norm yesterday. A smile. The epitome...

MRI on Kevin Garnett's leg reveals only muscle damage in calf, will likely miss (12/2010): Breathe easy, Celtics fans. All is not lost yet. Ainge said that he expects Garnett to be back within two weeks.