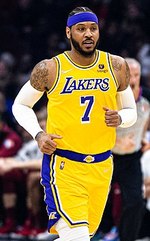 Carmelo Kyam Anthony (born May 29, 1984) is an American professional basketball player for the Portland Trail Blazers of the National Basketball Association (NBA). He has been named an NBA All-Star ten times and an All-NBA Team member six times. He played college basketball for the Syracuse Orange, winning a national championship as a freshman in 2003 while being named the NCAA Tournament's Most Outstanding Player. More about Carmelo Anthony

The most expensive item with a signature of Carmelo Anthony (2004-05 SP Signature Michael Jordan LeBron James Carmelo Anthony Auto BGS 9 #/25) was sold on eBay in December 2019 for $3650.00 while the cheapest item (CARMELO ANTHONY SIGNED 2003 NATIONAL CHAMP SU PHOTO) found a new owner for $0.01 in June 2010. The month with the most items sold (30) was March 2011 with an average selling price of $42.50 for an autographed item of Carmelo Anthony. Sold items reached their highest average selling price in June 2015 with $375.00 and the month that saw the lowest prices with $5.43 was August 2015. In average, an autographed item from Carmelo Anthony is worth $45.58.

Current items with a signature of Carmelo Anthony

These are the most current items with a signature of Carmelo Anthony that were listed on eBay and on other online stores - click here for more items.

Traded items with a signature of Carmelo Anthony

Most recently, these items with a signature of Carmelo Anthony were sold on eBay - click here for more items.

Carmelo Anthony announces scholarships for 32 students, as he continues to becom (05/27/20): Anthony has taken an active role in the Jordan Brand Wings Scholars program, which honored its recipients on Wednesday

Carmelo Anthony says he hit 'rock bottom emotionally' before landing with Trail (05/06/20): Melo's career very nearly ended before it was resurrected this season

Ben Wallace: Pistons likely wouldn't have won any rings with Carmelo Anthony (04/07/20): Wallace says Anthony 'would have had the potential to disrupt the team chemistry'

Carmelo Anthony says he would have won 'two or three rings' if Pistons picked hi (03/30/20): Instead of getting selected by Detroit with the No. 2 pick, Anthony got drafted third overall by the Denver Nuggets

Knicks expected to be interested in bringing Carmelo Anthony back to the Big App (02/2020): Anthony's former agent, Leon Rose, is set to take over as Knicks president

Melo double-doubles, Whiteside swats 10 in win (11/2019): Carmelo Anthony had 23 points and 11 rebounds and the Portland Trail Blazers downed Chicago 107-103 on Friday night for their second victory over the Bulls this week.

LeBron James and Lakers CLASH over Carmelo Anthony free agency as deadline looms (02/2019): LEBRON JAMES and Los Angeles Lakers have contrasting ideas on how to navigate the final 24 hours of the playoff registration period.

Knicks' Carmelo Anthony has a sick $12M New York rental on the market (03/2015): Check out where Anthony and his wife LaLa lived in New York City.

Things Are Getting Dark For Carmelo Anthony In His Lost Season With The Knicks (12/2014): The New York Knicks' season didn't take long to...

Carmelo Anthony might force Jeremy Lin out of another town (06/2014): Jeremy Lin could be in Carmelo Anthony’s way once again. The Houston Rockets, long linked as a potential destination for Anthony, began their efforts to clear enough money from under...

Jackson is asking Carmelo Anthony to keep his word (05/2014): Phil Jackson doesn’t have enough fingers to hold all of his championship rings, but that much success gives the New York Knicks president the street cred to ask Carmelo Anthony to be more selfless than he ever has.

Report: Bulls expected to make run at Carmelo Anthony (04/2014): The New York Knicks' soon-to-be free agent forward Carmelo Anthony will definitely attract a lot of suitors, and the Bulls reportedly be one of them.

Carmelo Anthony destroys mean fan on Twitter (12/2013): The Knicks star responded to a mean fan and it was great.

Carmelo Anthony Says the Knicks Miss Jason Kidd, Rasheed Wallace and Kurt Thomas (11/2013): The start of the Knicks’ season has been about as bad as it possibly could be, and finally, instead of acting like everything is just fine, Carmelo Anthony is being honest about the squad’s situation: They’re desperately missing a veteran presence in the locker room.

Carmelo Anthony: ‘I want to retire in New York’ (10/2013): CHICAGO — Carmelo Anthony, trying to quell those who have criticized him about touting his free agency, made his boldest statement yet about wanting to remain in orange and blue....

Knicks links: Carmelo Anthony's supporting cast needs to find the hoop (04/2013): Carmelo Anthony struggled in Game 4, but should have help in Game 5 with J.R. Smith coming off suspension

Knicks Defeat Wizards With Help of Carmelo Anthony (02/2013): To outlast the Wizards, the Knicks leaned on Carmelo Anthony for scoring and their defense to contain John Wall.

Carmelo Anthony's Third Bite at the Apple (10/2012): Spin the wheel as many times as you want, but it always lands on Melo. Photo Credit: Getty Images

Sweet 16 for Carmelo Anthony as U.S.A. crushes Tunisia (07/2012): The U.S. played their second unit starting the third quarter, outscoring Tunisia 39-14 in the period and put on a crowd-pleasing performance on the way to its second straight easy win.

Knicks’ Carmelo Anthony: ‘Next Year, We’ll Be Better’ (05/2012): Anthony vowed after the team's latest first-round ouster that things will change. And soon.

Knicks Fade Fast in Loss to Hawks After Carmelo Anthony Is Hurt (03/2012): As Jeremy Lin continued to rest his sore left knee, Carmelo Anthony hurt his groin in the fourth quarter of the Knicks’ loss to Atlanta on Friday night.

Can Jeremy Lin and Carmelo Anthony Coexist? (02/2012): Knicks fans are anxious about whether Anthony can fit into the new look Knicks team.

Carmelo Anthony: Knicks Behind Mike D’Antoni ’100 Percent’ (01/2012): Thought to be a contender, the Knicks are the runaway leaders as the NBA's biggest bust thus far.

Hartnett: Carmelo Anthony Picking Up Where He Left Off (12/2011): In the Knicks' Christmas opener against the Celtics, Carmelo Anthony picked up right where he left off by matching his clutch play seen during the 2011 NBA playoffs.

Carmelo Anthony, NBA Stars Cancel 4-Game Tour (11/2011): The four-city tour was supposed to stop at the Izod Center in East Rutherford on Dec. 10, but that game and three others have been scrapped now that the league and its players have a tentative labor agreement.

NBA Stars Talk Lockout After Exhibition; No Comment From Knicks’ Carmelo Anthony (10/2011): What Carmelo Anthony, Chris Paul and company haven't been able to do is find a deal with the NBA that they find acceptable enough to play real games again.

Carmelo Anthony Discreetly Got a Couple Surgeries (09/2011): Basketball news that isn't about the lockout travels kind of slowly these days.

Carmelo Anthony Played Organized Basketball Last Night (08/2011): You know you're in a lockout when a lighthearted charity game is news, but, well, it's news.

Report: Knicks’ Carmelo Anthony ‘Secretly Rehabbing’ Sore Elbow (06/2011): Carmelo Anthony reportedly led the Knicks to the NBA playoffs for the first time since 2003-4 with an ailing right elbow. According to the New York Post, the superstar "has been secretly rehabbing" from a bout of elbow bursitis that flared up in February.

Carmelo Anthony, Amar'e Stoudemire Want To Be Part Of Building Knicks (04/2011): Carmelo Anthony sees the Knicks as a 50-win team that competes for the Eastern Conference title.

Sprint Losing the Merger War, Wins Carmelo Anthony (03/2011): March has been monthus horribillis for Sprint Nextel. But a basketball star has given Sprint a little lift, at least for one day.

Why Carmelo Anthony's Move to the Knicks Is Good News For Everyone (02/2011): Even basketball fans who don't root for New York have reason to celebrate the star's arrival in the Big Apple

Nets beat Nuggets, Carmelo Anthony at The Rock (01/2011): The Nets almost had everything they wanted Monday night. Carmelo Anthony was in their building, the had a decent-sized and loud crowd and the Nets won.

Carmelo Anthony rejoins Nuggets following sister's death (12/2010): DENVER — Carmelo Anthony practiced with the Denver Nuggets Friday, returning to the team after taking eight days to mourn the death of his sister. The Nuggets' star forward left the team Dec. 22 and missed five games while helping his family deal with its loss.