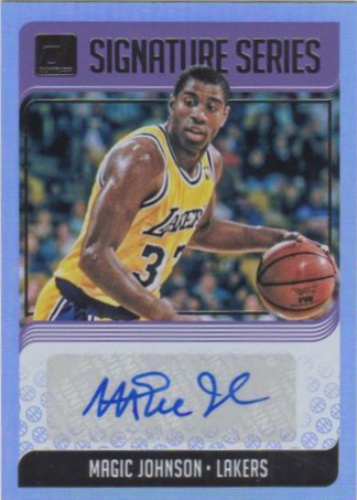 Earvin "Magic" Johnson Jr. (born August 14, 1959) is an American former professional basketball player. Often regarded as the greatest point guard of all time, Johnson played 13 seasons in the National Basketball Association (NBA). After winning championships in high school and college, Johnson was selected first overall in the 1979 NBA draft by the Los Angeles Lakers, leading the team to five NBA championships during their Showtime era. Johnson retired abruptly in 1991 after announcing that he had contracted HIV, but returned to play in the 1992 All-Star Game, winning the All-Star MVP Award. After protests from his fellow players, he retired again for four years, but returned in 1996, at age 36, to play 32 games for the Lakers before retiring for the third and final time. More about Magic Johnson

Current items with a signature of Magic Johnson

These are the most current items with a signature of Magic Johnson that were listed on eBay and on other online stores - click here for more items.

Traded items with a signature of Magic Johnson

If you're interested in Magic Johnson Rookie cards you might want to take a look at our sister site that specializes in Basketball Rookie Cards only.

Most recently, these items with a signature of Magic Johnson were sold on eBay - click here for more items.

How the Los Angeles Lakers’ Magic Johnson and Boston Celtics’ Larry Bird revital (01/06/23): Most younger fans of the NBA do not recall the time when the league was perpetually in financial danger and struggling to carve out its own sports broadcasting niche, thanks to these two.

On this date: Magic Johnson hits buzzer-beater to defeat Celtics (12/11/22): Early in the 1987-88 season, Magic Johnson delivered a dagger through the hearts of the Celtics - just as he did in the 1987 NBA Finals.

Stephen Curry leaves LeBron James off his all-time starting five, takes Magic Jo (12/10/22): We're sure everyone will debate civilly about these selections

Magic Johnson reveals he turned down chance to purchase Warriors stake (10/2022): Magic Johnson has yet to invest in an NBA team, but that isnt for lack of opportunity.

Where Steph Curry ranks vs. Kobe Bryant, Magic Johnson per Ryen Russillo (06/2022): Steph Curry added to his legacy as one of basketball's greats by winning a fourth championship, stacking up his resume against the likes of Kobe Bryant and Magic Johnson.

LeBron James, Magic Johnson not on the greatest of terms? (02/2022): Brian Windhorst on Lakers' future decisions: 'My guess my guess is that she is going to seek Magic's opinion when it comes to this and what Magic might offer will be interesting. I also think it's interesting to point out that I'm not so sure that ...

Letters to Sports: Lakers bosses won't fix their problems by firing Frank Vogel (01/2022): Some L.A. Times readers believe that firing coach Frank Vogel will not cure what ails the Lakers. Others are critical of Magic Johnson and Vogel.

Chris Paul almost certainly out of Lakers' price range despite Magic Johnson's T (07/2021): Paul would have to make an enormous financial sacrifice to join the Lakers

Trending: Magic Johnson, Trae Young and other react to Baylor's victory (04/2021): The Baylor Bears' win over the Gonzaga Bulldogs sparked reactions across the sports world.

Magic Johnson jokingly recruits Luka Doncic to join the Lakers while discussing (10/2020): The Hall of Famer and former Lakers executive laid out the next five to six years for his former team

Magic Johnson says Lakers' LeBron James 'definitely the MVP this season' due to (07/2020): Earlier this year, Johnson said that James was 'probably' the best all-around player ever

Magic Johnson, Bill Russell, LeBron James, Coco Gauff and others recognize and c (06/2020): Athletes from all leagues are celebrating the day

Magic sees ties between coronavirus, AIDS crises (04/2020): Magic Johnson is partnering with the NBA to try to raise awareness among black Americans about the coronavirus, and he noted the similarities he sees between this pandemic and the AIDS epidemic.

Lakers use promotion of Rob Pelinka to give him, not Magic Johnson, credit for s (01/2020): The Lakers have rewritten their recent history with a single press release

Magic Johnson on Lakers' early season success: 'This team would not be in the po (12/2019): Johnson walked away from his role as president of basketball operations in April

Harden has 29, Westbrook has 28 in 126-123 win over Pelicans (10/2019): Russell Westbrook said he'll take some time to reflect on the significance of his latest performance. After posting his second straight triple-double since joining the Houston Rockets and the 139th of his career, Westbrook passed Magic Johnson for second on the all-time list, behind only Oscar Robe

Basketball’s Golden Age Behind Him, Magic Johnson Still at Top of His Game (01/2019): Magic Johnson has it all. The best player in the world plays for his Lakers and his business is functioning at an all-time high. For 100 years of Champion, Magic reflects on his move into business world and contemplates what's next.

NBA: Remembering Magic’s best performance for the Lakers (12/2018): A look at some inside details about the best game ever played by Magic Johnson

Maps to the Stars: The Magic Johnson Map Guide to Los Angeles (04/2015): In Maps to the Stars, Curbed LA maps the lives of the most notable figures in Los Angeles history through the places that were important to them. The worst season in Lakers history comes to a merciful end tomorrow night....

Earvin 'Magic' Johnson Jr. invited to appear in Palmetto (01/2015): Earvin "Magic" Johnson Jr. has been ivnited to make an appearnce in Palmetto. Click to Continue »

Byron Scott-Magic Johnson friendship has plenty of fuel left in tank (12/2014): Magic Johnson created a mess earlier this month by saying the Lakers should "lose every game" and secure a top-five draft pick.

Ferguson riots draw response from LeBron James, Magic Johnson (11/2014): In a show of unity with the family of Michael Brown and Trayvon Martin — two recent victims of high-profile shootings in the U.S., in which the victim was unarmed and black — LeBron James shared this sketch on Instagram on Monday night.

Mia Hamm, Magic Johnson Invest in New MLS Team (10/2014): Major League Soccer (MLS) this week officially announced that a new team will be coming to Los Angeles. The Los Angeles Football Club (LAFC) will make its MLS debut in 2017. The team will play in a new stadium that …

Magic Johnson: Jerry Buss wanted Byron Scott to coach Lakers (07/2014): Magic Johnson was on hand on Monday when the Lakers welcomed his former teammate, Byron Scott, as the Lakers' next head coach.

This Student Impressed Magic Johnson, Now He’s Supporting Her Dreams (12/2013): As we get ready to head into a new year, it seems fitting to introduce you to a young woman ready for anything the future has to hold. Meet Tameka Cannon.

Magic Johnson to have signing session in Taylor (11/2013): MagicJohnson was in East Lansing Friday to watch his alma mater, No. 1 Michigan State, beat Mount St. Mary's at Breslin Center. Saturday, the Lakers great will be at Detroit City Sports from noon-1 p.m. at Southland Center in Taylor for an autograph session.

Magic Johnson says Michael Carter-Williams will win Rookie of the Year (10/2013): Lakers legend Magic Johnson took to Twitter last night following the Sixers 114-110 win over the Miami Heat to let everyone know what he thought of the rookie from Syracuse.

Magic Johnson eyes development at State Fairgrounds (07/2013): Johnson's developments in other cities have been big hits, usually involving building a theatre, retail space, restaurants and at this particular ...

New Magic Johnson dropout recovery program opens in Savannah (05/2013): A new charter school program designed to get dropouts to graduate has opened in Savannah. The Magic Johnson Bridgescape learning center will serve students in grades nine through 12 who have dropped out or are at risk of quitting school.

Another Side of Magic Johnson (02/2013): FOX19's Tricia Macke went one on one with NBA Legend Earvin "Magic" Johnson Jr.

Magic Johnson to Ex-"Employee" -- You Got Fired 'Cause You Sucked at Your Job! (12/2012): Magic Johnson is whipping out a full court defense -- claiming the ex-flight attendant who's suing him for wrongful termination wasn't canned for her old age ... she was just TERRIBLE at her job. As TMZ first reported, over-40 flight attendant…

Magic Johnson: Jim Buss has done 'a good job' (07/2012): The Lakers legend defends the longtime owners' son, who has brought in veteran free agents to bolster the roster. Only a few months ago, Magic Johnson stared into an ESPN camera and offered a stern warning directed at one specific figure in the Lakers' front office.

'The magic is you believing in yourself,' Magic Johnson tells Saginaw students (01/2012): Thompson Middle School erupted into cheers when a tall man in a blue suit walked into their auditorium.

Magic Johnson Reveals Plans To Team Up With Rappers To Educate On Homophobia & H (12/2011): 20 years after shocking the world with the announcement that he had contracted the HIV virus, retired NBA star Magic Johnson plans to team up hip-hop stars to address the life-threatening disease and homophobia in the genre.

Magic Johnson: Cain 'Can't Recover' (11/2011): On the deck of the USS Carl Vinson, Earvin “Magic” Johnson spoke with reporters about politics. Johnson, who attended Michigan State University for two years, is here as honorary captain of the Spartans in the “Carrier Classic” college basketball game on board the deck of...

Magic Johnson: Newest Media Mogul? (05/2011): As a play maker for the Los Angeles Lakers, Magic Johnson was known for his will to win and his knack for both scoring and dishing the ball. Could Johnson be applying those skills to an even more demanding field: ownership of a media empire?

Magic Johnson lecture at Carver-Hawkeye canceled (04/2011): Former basketball star Earvin “Magic” Johnson has canceled his lecture scheduled for Thursday, April 28, at the University of Iowa’s Carver Hawkeye Arena due to a scheduling conflict.

Magic Johnson: March Couch Potato (03/2011): The basketball legend gives his thoughts on this year's NCAA tournament, his desire to own and NBA team and more.