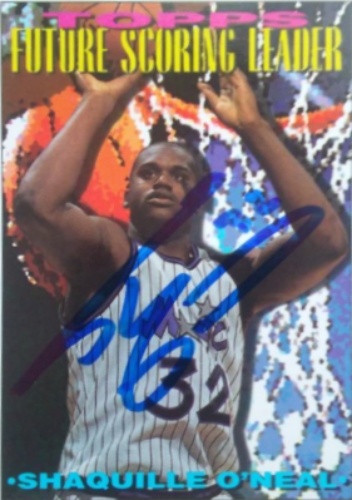 Shaquille Rashaun O'Neal (/ʃəˈkiːl/ shə-KEEL; born March 6, 1972), known commonly as "Shaq" (/ʃæk/ SHAK), is an American former professional basketball player who is a sports analyst on the television program Inside the NBA. O'Neal is regarded as one of the greatest basketball players and centers of all time. He is a 7-foot-1-inch (2.16 m) and 325-pound (147 kg) center who played for six teams over his 19-year career in the National Basketball Association (NBA) and is a four-time NBA champion. More about Shaquille O'Neal

Current items with a signature of Shaquille O'Neal

These are the most current items with a signature of Shaquille O'Neal that were listed on eBay and on other online stores - click here for more items.

Traded items with a signature of Shaquille O'Neal

If you're interested in Shaquille O'Neal Rookie cards you might want to take a look at our sister site that specializes in Basketball Rookie Cards only.

Most recently, these items with a signature of Shaquille O'Neal were sold on eBay - click here for more items.

Shaquille O'Neal surprises customers at Houston restaurant by paying for their m (12/30/22): The restaurant referred to Shaq as 'a great guy'

Former Celtic Shaquille O’Neal’s 1994 FIBA World Cup highlights (12/23/22): Long before he would join the Boston Celtics in search of a ring as a backup big man in the twilight of his Hall of Fame career, NBA icon Shaquille O'Neal would represent the United States at the 1994 FIBA World Cup.

Dwight Howard rips Shaquille O'Neal for criticizing his dominant play in Taiwan (11/25/22): Howard, who played for the Lakers in his last NBA stint, recently recorded 38 points and 25 rebounds in his Taiwanese debut

Celtics alum Shaquille O’Neal tells how he spent a million dollars in just one d (11/2022): The Big Aristotle learned an important lesson about NBA finances in a hurry as a result.

Shaquille O’Neal opens up on Ben Simmons and dealing with critics (10/2022): NBA legend Shaquille O'Neal compares his own struggles with hecklers to what Ben Simmons is currently going through.

Shareef O’Neal is joining the NBA G League Ignite (07/2022): Shareef O'Neal, the son of Lakers great Shaquille O'Neal, will have an opportunity to develop his game as a member of the G League Ignite.

Scotty Pippen Jr. and Shareef O'Neal are teaming up on the Los Angeles Lakers' s (06/2022): Their famous fathers never shared a pro roster, but the sons of Scottie Pippen and Shaquille O'Neal will be looking to make the Lakers' roster this fall.

Udonis Haslem: Draymond Green ‘broke the code’ by saying Celtics would make NBA (05/2022): After helping the Warriors win the West, Draymond Green was repeatedly asked by Shaquille O'Neal on TNT about an NBA Finals opponent.

Shaquille O'Neal says he'd coach the Lakers 'if they offered me $25 million a ye (04/2022): A bold claim from the four-time NBA Champion

Joel Embiid the MVP front-runner. But his eyes are focused on earning his first (02/2022): Joel Embiid is NBA's scoring leader – the first center to do so since Shaquille O'Neal in 1999-2000 – and is becoming the force he was expected to be.

Shaquille O'Neal calls out 'crybaby' Ben Simmons amid holdout from 76ers: 'I don (01/2022): This isn't the first time that O'Neal has been publicly critical of Simmons

Franz Wagner joined Shaq in Magic rookie history with 38-point outburst (12/2021): Wagner set the new NBA single-game high by a rookie this season and joined Shaquille O'Neal in some team history on Tuesday.

Shaquille O'Neal reveals why he turned down role in 'The Green Mile' (11/2021): The 15-time NBA All-Star says he nearly shared the silver screen with Tom Hanks

Shaquille O'Neal: Nets should tell Kyrie Irving to 'get his ass up outta here' f (09/2021): Shaq said if he was Irving's teammate, he would not want him to remain on the team while unvaccinated against COVID-19

Robert Horry says Hakeem Olajuwon was better than Shaquille O'Neal, but Shaq was (06/2021): Horry won championships with both big men

Shaquille O'Neal on AEW: Shaq goes through a table and picks up a win in his All (03/2021): A look at all things Shaq on AEW

Utah lawmakers defend Donovan Mitchell with lighthearted resolution following cr (01/2021): Shaq told Mitchell that he didn't think he had what it takes to get to the next level in an awkward interview

Shaquille O'Neal explains why Phil Jackson made such a big impact as Lakers coac (12/2020): O'Neal, who joined CBS Sports' 'All Things Covered' podcast, said Jackson instilled confidence in everyone

LSU's O'Neal, Shaq's son, gets immediate waiver (11/2020): LSU forward Shareef O'Neal, the son of former NBA star Shaquille O'Neal, is immediately eligible to play after the NCAA granted him a waiver. O'Neal had transferred from UCLA.

Shaquille O'Neal helps Florida driver stranded on side of highway (07/2020): The Big Diesel made sure the driver was taken care of before cops arrived on the scene

Shaquille O'Neal apologizes to David Robinson for making up rumor about autograp (05/2020): O'Neal had previously maintained that Robinson denied him an autograph as a kid, which he used as motivation on the court

Shaquille O'Neal's daughter, Amirah O'Neal, will join her brother by playing bas (04/2020): Another of Shaq's children is heading to Baton Rouge where he was a college star in the 1990s

Shaq says he 'stopped going' to 'Tiger King' zoo (03/2020): Hall of Fame center Shaquille O'Neal attempted to clarify his brief appearance on the hit Netflix documentary 'Tiger King,' saying that while he loves big cats, 'he had no idea' what was going on at the Oklahoma ranch.

Wiseman leads No. 14 Memphis against UIC (11/2019): During his All-Star days in the NBA, Penny Hardaway had the luxury of playing with a young Shaquille O'Neal, who had the bounce to reach anything thrown near him and the power to slam it home against anyone. Hardaway thinks he's now coaching the next Shaq in 7-1 freshman James Wiseman, who made

Shaquille O'Neal -- Ripped by Judge For Insta-Shaming Fan ... But Lawsuit Gets T (04/2015): Shaquille O'Neal was way out of line when he took an Instagram potshot at an innocent guy's face -- but he's still gonna get away without paying the guy a cent ... according to a Michigan judge.  According to legal docs obtained by TMZ Sports…

How the Orlando Magic nearly passed on drafting Shaquille O'Neal ... by accident (03/2015): There was never any doubt that the Magic would take Shaquille O'Neal with the first overall pick in 1992. But they almost missed out on the legendary big man anyway.

Shaquille O'Neal is No. 2 on Louisiana's all-time list of top 51 athletes (08/2014): He is the only LSU player to be selected national college player of the year, win the NBA's MVP award (in 2000) and earn a gold medal in the Olympics.

Shaquille O'Neal: I would definitely kick Charles Barkley's butt (05/2014): The Newark native said he'd win a fight "because I'm from the streets."

Shaunie O'Neal and Shaquille O'Neal head to court over new reality show (12/2013): Shaunie O'Neal, creator of the popular VH1 series Basketball Wives , recently made a deal with VH1 to create another reality show centered around the daily life of her and her family, entitled read more

Shaquille O'Neal proves the main attraction at the Louisiana Hall of Fame youth (06/2013): Louisiana Sports Hall of Fame fans got a chance to get autographs from the stars Saturday morning at Northwestern State's Prather Coliseum.

Mikhail Prokhorov Gives ‘Inside the NBA’ Crew Russian Hats, Leading Shaquille O’ (11/2012): Mikhail Prokhorov has a good team down there in Brooklyn. The crew from TNT’s Inside the NBA couldn’t make it to opening night at the Barclays Center to see the team in person, though, so the Nets owner sent them a gift of goodwill in hopes that they will come soon. In a show of [...]

Lakers to Retire Shaquille O’Neal’s Jersey In April (08/2012): The Los Angeles Lakers will retire Shaquille O’Neal’s No. 34 jersey at halftime of their April 2 game against the Dallas Mavericks. In eight seasons with the Lakers, O’Neal posted averages of 27 points, 12 rebounds and 2.5 blocked shots, while leading L.A. to three Championships.

Shaquille O'Neal rips the Magic for their handling of coaching search (07/2012): Much of what Shaquille O'Neal says should be greeted with skepticism. He is an entertaining provocateur who, by his own admission, often makes outrageous statements just to drum up publicity.

Shaquille O’Neal: Steve Nash Didn’t Deserve Two MVPs (02/2012): In his first year as a talking head, Shaquille O’Neal has struggled to translate his outsized personality onto the television screen. What the retired big man hasn’t had any trouble with, however, is the ability to give amazing interviews.

Shaquille O'Neal talks career, life after NBA (10/2011): Charming the crowd with jokes and pranks, National Basketball Association icon Shaquille O'Neal spoke in front of about 3,200 people at the O'Connell Center on Tuesday evening.

Tempe Police Allowed Shaquille O’Neal to Play Cop by Giving Him Secret Info on S (09/2011): Just after noon on December 15, 2009, a Tempe police detective sent a very specific e-mail about how to conduct a child pornography investigation to this private address: detectiveoneal32[at]ma.com. Detective Burke Mattlin was writing from his work computer to a former colleague, Shaquill...

Shaquille O’Neal Tried to Get a Reporter to Hook Him Up with Rihanna? + His ... (08/2011): Shaquille O’Neal has a thing for Rihanna ! Or at least he used to. In a set of newly leaked text messages and e-mails from 2008, the now retired NBA star can be seen trying to get Newsweek reporter Allison Samuels to set… Click here for more »

Shaquille O'Neal's afoot (04/2011): NEW YORK - There are two ways to look at the presence of Shaquille O'Neal at Madison Square Garden but only one...

Celtics banking on health of Shaquille O'Neal with trades (02/2011): DENVER - The Boston Celtics unloaded lots of big men at the NBA trading deadline and the key to making sure the...