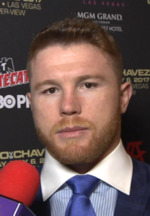 Current items with a signature of Canelo Alvarez

These are the most current items with a signature of Canelo Alvarez that were listed on eBay and on other online stores - click here for more items.

Traded items with a signature of Canelo Alvarez

Most recently, these items with a signature of Canelo Alvarez were sold on eBay - click here for more items.

Saul 'Canelo' Alvarez, James Kirkland agree to fight in May (01/23/15): Promoter Oscar De La Hoya said Friday he has signed agreements from former light-middleweight champion Saul “Canelo” Alvarez and heavy-punching James Kirkland to fight each other in May on HBO.

After Mayweather: Canelo Alvarez Moves On | BoxingInsider.com (02/2014): Most fighters suffer a first loss at some point in their careers. Few, however, suffer it in the manner Saul Alvarez did last September when he was routed in front of millions by Floyd Mayweather.

Canelo Alvarez Is Happier Than Ever With Golden Boy Promotions, The Leading Boxi (10/2013): LOS ANGELES (Oct. 4, 2013) -- Canelo Alvarez, former super welterweight world champion and one of the most popular boxers in modern history, confirm ...

“The One” Floyd Mayweather vs Canelo Alvarez Fight Week Notebook | BoxingInsider (09/2013): The following is a special edition of the Boxing Insider notebook for the upcoming super fight between Floyd Mayweather Jr. and Saul “Canelo” Alvarez .

CANELO ALVAREZ SAYS THIS IS HIS TIME BUT TRAINER ROBERT GARCIA SAYS NOT YET (07/2013): Undefeated Mexican Saul Canelo Alvarez who faces pound for pound king and undefeated super welterweight Floyd Mayweather Jr at a catch-weight of 1 ...

David J. Neal: Floyd Mayweather, Canelo Alvarez hope fight lives up to hype (06/2013): For a long, sapping 50 minutes after the barnstorming press conference was supposed to start, the scene in Bayfront Park on Friday afternoon acted as a metaphor for boxing’s big events of late:

Canelo Alvarez brings it home to unify titles (04/2013): After knocking Austin Trout down for the first time in his career, Alvarez wins the WBA super-welterweight title by unanimous decision. It's one thing to talk.

Canelo Alvarez Update (01/2013): A important source has informed Fightnews.com that Mexican idol Saul Alvarez has not yet signed a contract for the May 4 Golden Boy Promotions events at the MGM Grand Hotel & Casino in Las Vegas, where it is rumored that he could face WBA super welterweight champion Austin Trout.

ESPN: Potential Floyd Mayweather fight vs. Saul 'Canelo' Alvarez among boxing's (12/2012): The obvious superfight involving Pacquiao would be a fifth fight with Juan Manuel Marquez, the boxer who just knocked him out in the sixth round Saturday night in Las Vegas.

Press Conf Quotes: Canelo Alvarez & Josesito Lopez (11/2012): “I want to thank all of the fans who are here. This is going to be a great fight…a great event. I am very happy with this fight. “I think Josesito Lopez won his way here. He won his way to getting this shot September 15th.