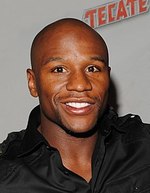 Floyd Joy Mayweather Jr. (born Floyd Joy Sinclair; February 24, 1977) is an American professional boxing promoter and former professional boxer. He competed between 1996 and 2015, and made a one-fight comeback in 2017. During his career he won fifteen major world titles including The Ring in five weight classes, the lineal championship in four weight classes (twice at welterweight), and retired with an undefeated record. As an amateur, Mayweather won a bronze medal in the featherweight division at the 1996 Olympics, three U.S. Golden Gloves championships (at light flyweight, flyweight, and featherweight), and the U.S. national championship at featherweight. More about Floyd Mayweather

Current items with a signature of Floyd Mayweather

These are the most current items with a signature of Floyd Mayweather that were listed on eBay and on other online stores - click here for more items.

Traded items with a signature of Floyd Mayweather

The most expensive item with a signature of Floyd Mayweather (Floyd Mayweather Jr And Manny Pacquiao Signed Cleto Reyes Glove PROOF) was sold in May 2015 for $1300.00 while the cheapest item (FLOYD MAYWEATHER JR CONNER MGREGOR SIGNED GLOVE) found a new owner for $0.01 in February 2019. The month with the most items sold (17) was December 2020 with an average selling price of $149.99 for an autographed item of Floyd Mayweather. Sold items reached their highest average selling price in April 2015 with $1275.00 and the month that saw the lowest prices with $4.99 was May 2011. In average, an autographed item from Floyd Mayweather is worth $108.50.

Most recently, these items with a signature of Floyd Mayweather were sold on eBay - click here for more items.

Floyd Mayweather Trolls Conor McGregor After He Was Arrested - Olori Supergal (03/13/19): Floyd Mayweather is known for his boxing skills, and also for his ability to troll. And he’s back to the later after being retired from the former. The undefeated boxer was walking through Beverly Hills when he swarmed by cameras. Instead of trying to avoid the paparazzi like Conor did by smashing t

Floyd Mayweather Taunts Conor McGregor By Begging Paparazzi To Film Him (03/13/19): Floyd is undefeated as a troll. Conor McGregor got into a bit of trouble a few days ago when he smashed the cell phone of a fan who was trying to get some pictures of him. McGregor was promptly arrested and then released with all of it going down in Miami. Clearly, McGregor isn't a fan of the papara

Floyd Mayweather Has First Competitive Boxing Spar In Over Two Years (03/12/19): Floyd Mayweather has been travelling the world and enjoying life for the most part these last couple of years. Technically, his last ‘fight’ came in his 50th professional boxing match b…

If not Floyd Mayweather, maybe Keith Thurman for Pacquiao? | Philstar.com (02/2019): If Floyd Mayweather decides to stay retired, the man whom WBA welterweight champion Sen. Manny Pacquiao could fight next is undefeated Keith Thurman whose nickname “One Time” is supposed to herald his one-punch knockout power. by Joaquin Henson

Floyd Mayweather Shows Off $18M Watch And Other Luxury Timepieces (01/2019): Mayweather flaunts insane watch collection in new IG video. Floyd 'Money' Mayweather has nothing but time (and money) on his hands following his most recent payday - a reported $9 million purse for an exhibition boxing match against Tenshin Nasukawa, which lasted all of 139 seconds. In anticipation

Floyd Mayweather rips McGregor, Khabib, says he will never fight in MMA (12/2018): "Everything is always on my terms, I’m the ‘A’ side, always. I’m not going to fight in the MMA ring."

Hey Floyd, If You Can’t Read This Article Have One of Your Nut Huggers Read It T (05/2015): As I tear myself away from my altar dedicated to the great A.J Liebling, I begin to think about the legacy of Floyd Mayweather, JR. a little more deeply. Contrary to some of my more vulgar and seemingly unenlightened detractors, I do not hate the man ...

Floyd Mayweather Beats Justin Bieber With Baseball Bat In Conan Clip Recap (10/2014): Justin Bieber has had his fair share of fights - with Orlando Bloom, a limo driver, Dave & Busters, a Hawaii photographer, the list goes on.

Floyd Mayweather, trainers confident about Marcos Maidana rematch (08/2014): Floyd Mayweather Jr. has dealt with a rematch before, and while the judges’ scoring was more narrow in his second 2002 meeting against Mexico’s Jose Luis Castillo, the bout was widely viewed as a more convincing Mayweather victory.

Floyd Mayweather Makes Appearance At BET Awards (06/2014): Floyd Mayweather may be able to handle most men in a boxing ring, but when it comes to women in the real world, he is a little less skilled. He recently tried to strike up a friendly conversation with rapper …

Floyd Mayweather Paid Nicki Minaj $50,000 to Appear at His Daughter’s Birthday (05/2014): When you’re Floyd Mayweather and you want to give your daughter the best birthday present ever, what do you do? Buy her a car? Maybe. But that’s a problem if she’s not of legal driving age. So how about paying her favorite rapper to attend her birthday party?

Floyd Mayweather Jr. -- New Million Dollar Watch ... NOTHING BUT DIAMONDS!! (03/2014): If Floyd Mayweather Jr. doesn't knock you out, his new watch -- DRIPPING IN 60 CARATS of flawless diamonds -- will do the job ... and TMZ Sports has the first pics of Floyd with his prized possession.A source with direct knowledge of the deal tells…

Ricky Burns's opponent Terence Crawford can be next Floyd Mayweather, says his m (02/2014): Ricky Burns set for tough world title test on Saturday but American "has not fought anyone as good" as Scot, says Nelson

Floyd Mayweather Makes Big Money off of NFL Betting, Too (09/2013): Floyd Mayweather loves sharing his winning bets via his Twitter, and he has  made plenty of money  so far this season on college football. Monday night it looks like he bet big on the New Orleans Saints, winning $41,666.65 on a $50,000 bet.

Floyd Mayweather reminds you how rich he is (08/2013): FLOYD MAYWEATHER JR --- Las Vegas, NV, U.S.A: Floyd Mayweather Jr. ended a two-year retirement and is training for an upcoming fight against Juan Manuel Marquez.

Anthony Ogogo looking forward to fighting on Floyd Mayweather undercard in Septe (07/2013): As a fledgling professional, Anthony Ogogo would normally expect to be on a whistle-stop tour of the country's leisure centres and small halls.

Boxing: Floyd Mayweather to fight Saul Alvarez (05/2013): Floyd Mayweather has confirmed he will put his unbeaten record on the line in a light-middleweight unification world title fight against Saul "Canelo" Alvarez later this year.

Josie Harris On Dating After Floyd Mayweather: ‘I’m Waiting For Anybody To Enter (01/2013): Her goodies are definitely not on lock.

Report: Floyd Mayweather has $3-million bet on Michigan vs. Alabama (08/2012): Grand Rapids-bred boxing superstar Floyd Mayweather, who has been known to throw down some big money on sporting events, reportedly has wagered $3...

Floyd Mayweather's jail term begins Friday, even as work surrounding his boxing (05/2012): Boxing star can't seek another delay in the 87-day sentence, which could be reduced with good behavior, because of boxing commission's action.

Floyd Mayweather Gives Back To Youth Boxing, Sponsors 2012 Golden Gloves Tourney (04/2012): Floyd Mayweather may get a bad wrap for his controversial statements in the media, but what he's done in boxing has made him arguably the sport's biggest star. With all his success, he makes sure to give back.

Candid Floyd Mayweather Admits He’s Fading Fast, Needs Safe Opponents | BoxingIn (03/2012): It was surprising to read that Floyd Mayweather has admitted that he needs to be careful in selecting future opponents now that he’s in the home stretch of his career.

Floyd Mayweather Jr. May Need to Fire His Entourage (02/2012): The famed welterweight has been in the news for all of the wrong reasons lately.

Floyd Mayweather vs Victor Ortiz Does A Big Buy Rate | BoxingInsider.com - Boxin (10/2011): For weeks, we’ve heard speculation as it relates to the numbers that “Star Power: Mayweather/Ortiz” did.

Floyd Mayweather returns to do something Manny Pacquiao refuses to do | BoxingIn (06/2011): By the time perennial pound for pound great Floyd Mayweather steps into the ring in mid September, it would have been approximately 17 months since he last saw action.

Bernard Hopkins, Floyd Mayweather Senior, and Chad Dawson are “On the Ropes Boxi (05/2011): If you detect any issues with the legality of this site, problems are always unintentional and will be corrected with notification. The views and opinions of all writers expressed on eastsideboxing.com do not necessarily state or reflect those of the Management.

Floyd Mayweather Will Be Back In Court In March, Still Insists He Will Fight Pac (01/2011): By James Slater - Floyd Mayweather Junior continues to make the news; mostly outside of the boxing ring.

Floyd Mayweather Sr: “Shane hit my son and hurt my son, because my son ain’t doi (12/2010): by Geoffrey Ciani - Last week’s 105th edition of On the Ropes Boxing Radio featured an exclusive interview with boxing trainer Floyd Mayweather Senior, whose son Floyd Mayweather Junior is widely viewed as one of the best pound-for-pound boxers in the world today.