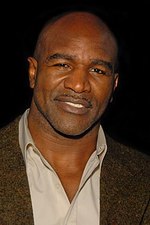 Evander Holyfield (born October 19, 1962) is an American former professional boxer who competed between 1984 and 2011. He reigned as the undisputed champion at cruiserweight in the late 1980s and at heavyweight in the early 1990s, and remains the only boxer in history to win the undisputed championship in two weight classes in the three belt era. Nicknamed "the Real Deal", Holyfield is the only four-time world heavyweight champion, having held the unified WBA, WBC, and IBF titles from 1990 to 1992, the WBA and IBF titles again from 1993 to 1994, the WBA title a third time from 1996 to 1999; the IBF title a third time from 1997 to 1999 and the WBA title for a fourth time from 2000 to 2001. More about Evander Holyfield

Current items with a signature of Evander Holyfield

These are the most current items with a signature of Evander Holyfield that were listed on eBay and on other online stores - click here for more items.

Traded items with a signature of Evander Holyfield

Most recently, these items with a signature of Evander Holyfield were sold on eBay - click here for more items.

FILM REVIEW: Tyson versus Holyfield fight as metaphor for Nigeria’s election - V (02/11/19): Historically, there have been good efforts by sports administrators to keep sports and politics as far apart as possible. Yet, besides the increasing cases of politicisation of sports in modern times, sports and politics have proved to have natural close affinities: both have to do with contests. In

Wiz Khalifa Gets Boxing Lesson From Evander Holyfield, Real Deal Punches! (12/11/18): Wiz Khalifa got in a 1-on-1 training sesh with the boxing legend!

Built tough: Elijah Holyfield's hard work pays off for Georgia and himself in 20 (12/11/18): While the spotlight has shone on Holyfield a little brighter this season, the way the running back has handled it hasn’t been surprising to those who know him best.

Evander Holyfield -- Mitt Romney Can Punch Me ... If He Can Catch Me (03/2015): Evander Holyfield says he's giving Mitt Romney the GREEN LIGHT to pummel his face in their upcoming charity boxing match ... if the Mitt can get past his impregnable defense.   FYI -- 52-year-old Holyfield is squaring off with…

Chew on this: Mike Tyson to present Evander Holyfield at Hall of Fame induction (07/2014): Apparently time heals all wounds - including having a piece of your ear bitten off.

[video] Evander Holyfield:Biting Is an Act of Desperation (06/2014): June 27 (Bloomberg) -- Former Undisputed World Champion Evander Holyfield discusses being bitten by Mike Tyson and how he has worked things out with him since on "Street Smart." (Source: Bloomberg) ...

Evander Holyfield sympathizes with ear-biting victim Alex Guerrero (05/2014): In a recently aired commercial for Foot Locker, Mike Tyson apologizes to Evander Holyfield and hands him back the piece of his ear that he bit off.

Rick Ross buys Evander Holyfield's money pit (01/2014): It's a proven fact that mansions suck: They suck up utilities. They suck up maintenance.… [ Read more ] [ Subscribe to the comments on this story ]

Evander Holyfield pledges to feed Phoenix homeless (12/2012): One of the most famous athletes in the world came to downtown Phoenix for a good cause Thursday. He was joined by local leaders, all in an effort to feed the hungry.

Evander Holyfield Set To Retire If No Fights Forthcoming In 2012 (11/2012): Frustrated at his inability to secure fights with any of the current heavyweight champions, faded former great Evander Holyfield says he’ll hang up his gloves permanently if he can’t find a bout by the end of 2012.

Ricky Hatton knocked out by latest visitor - Evander Holyfield (08/2012): Evander Holyfield is the latest boxing legend to visit to Hatton Health and Fitness. The five time world heavyweight champion is currently visiting Britain where he has been involved in several charity events and visiting the London 2012 Olympic Games.

NBC interviews random tourist about the queen without realizing he was Evander H (07/2012): The Today Show got some "man on the street" comments from tourists in front of Buckingham Palace about the opening ceremony.

Heavyweight Legend Evander Holyfield Says He'll Retire This Year If He Doesn't G (06/2012): By James Slater: Evander Holyfield turns 50 this coming October, yet he says the only way he will retire is if he is not given a world championship fight this year.

Evander Holyfield Speaks In Mobile To U.S. Olympic Boxers (08/2011): The five-time heavyweight champion said that this year's Olympic team has more pressure on it than the team he was on in 1984.

Evander Holyfield Delivers a Realer Deal than Pacquiao and Mosley | BoxingInside (05/2011): There were two fights featuring world-famous names last Saturday night. One took place in Las Vegas, Nevada and had attracted mountains of mostly unjustified media hype. The other took place in Copenhagen, Denmark, and had garnered almost zero attention in the United States.

One More Time: Evander Holyfield Set for another Title Fight | BoxingInsider.com (04/2011): It’s getting so ridiculous you kind of have to admire the guy. Vowing to stay unretired until he unifies the heavyweight championship of the world again, Evander Holyfield, at age 46, is getting ready to fight his 18th heavyweight title fight. Let that sink in for just a moment.

WBF Turns Down Evander Holyfield vs Green | BoxingInsider.com (02/2011): The five-men Championship Committee of the World Boxing Federation after consideration of all arguments has decided against sanctioning the proposed second title defence of its world heavyweight champion Evander Holyfield against Denmark’s Brian Nielsen.