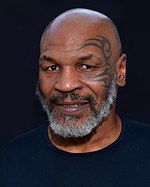 Michael Gerard Tyson (born June 30, 1966) is an American former professional boxer who competed from 1985 to 2005. He reigned as the undisputed world heavyweight champion from 1987 to 1990 and was the first heavyweight boxer to simultaneously hold the WBA, WBC, and IBF titles, as well as the only heavyweight to successively unify them. Claiming his first belt at 20 years, four months, and 22 days old, Tyson holds the record as the youngest boxer to win a heavyweight title. More about Mike Tyson

Current items with a signature of Mike Tyson

These are the most current items with a signature of Mike Tyson that were listed on eBay and on other online stores - click here for more items.

Traded items with a signature of Mike Tyson

Most recently, these items with a signature of Mike Tyson were sold on eBay - click here for more items.

OP-ED: Did Terry Crews forget Mike Tyson was convicted of rape or does Mr. #Meto (02/20/19): In recent months, actor Terry Crews has been rightly lauded for his activism in conjunction with the Me Too Movement after going public about his own sexual assault. His condemnation of “the cult of masculinity” has provided a blueprint for how men can hold each other accountable. But his recent app

How Did Mike Tyson Manage To Blow Through $400 Million? (12/2018): Mike Tyson is legendary for many reasons – the face tattoo, the biting off of Evander Holyfield's ear, oh, and all of the knockouts. "Iron" Mike Tys...

You'll never guess who inspired Mike Tyson's Madonna collaboration (01/2015): Mike Tyson has been speaking about working with Madonna on some of her new music.

KG on bite: 'Shout out to Mike Tyson' (11/2014): Kevin Garnett tried to bite Joakim Noah during the Chicago Bulls' win over the Brooklyn Nets on Sunday.

Seth Rogen, Mike Tyson & More Send Heartbreaking Messages To Joan Rivers (08/2014): Celebrities continue to show how much they care about comedian Joan Rivers, who was hospitalized on Aug.

The Book Reader: Mike Tyson, Literary Icon (12/2013): Sohrab Armari of The Wall Street Journal reports for NY1 on newly released book titles and the world of publishing in "The Book Reader."

Mike Tyson on being the hyper-scary guy and what he thinks of Mayor Rob Ford (11/2013): In conversation with Brian Bethune

Mike Tyson worries for his survival, no amends for Indy rape conviction (08/2013): In his first interview since declaring himself a 'vicious alcoholic' on the 'verge of dying,' former heavyweight Mike Tyson opened up about his battles staying sober.

Mike Tyson Loves Paying Taxes, Hopes "Obamacare" Will Save Him Money [VIDEO] (04/2013): Mike Tyson is hoping that " Obamacare " will help him pay off the millions he owes in back taxes. Instead of running from the debt, the former boxing champ announced on Fox News that he is "looking forward" to paying his bills .

Mike Tyson Bares All in One Man Show (02/2013): One man show runs through Sunday at the Orpheum Photo Credit: Getty Images

Mike Tyson takes 1-man show on road including SoCal (11/2012): Mike Tyson is going another round with his one-man show 'Mike Tyson: Undisputed Truth.'

China's 'Little Mike Tyson' edges toward ultimate glory (10/2012): By Patrick Cusick -- It says a lot about the evolution of professional boxing in China that a pint-sized strawweight fighter Xiong Zhao Zhong has em ...

Mike Tyson struggling for New Zealand visa after 1992 rape conviction (08/2012): The ex-boxer wants to attend a series of self-help lectures in the country.

Mike Tyson's Zombie-Like Ear Biting Was 15 Years Ago Today (06/2012): With the recent rash of zombie-esque crimes grabbing headlines around the world, HuffPost Weird News would be remiss if we forgot to recognize the anniversary of Mike Tyson's scandalous case of ear-biting terror.

I try my best to control my temper, says Mike Tyson (04/2012): London, May 1 (ANI): Mike Tyson has said that no matter how hard he tries to control his temper, he loses it once in a while.

Mike Tyson Confirmed for ‘The Hangover 3′ (02/2012): Mike Tyson has let be known that he will once again be involved in another round of debauchery and mayhem - but don't worry, he's only talking about returning for 'The Hangover 3'.

Video: Mike Tyson Singing Bossa Nova on Brazilian Television (11/2011): And here it is, your moment of Zen.

New video advertisement involving Mike Tyson, Floyd Mayweather Jr.d and 50 Cent (10/2011): By Vitali Shaposhnikov: For those of you who enjoy an occasional energy drink in order to re-vamp yourselves after or during a rough day, there is a brand new product that you might find interesting.

Setting world records and facing down Mike Tyson bring meaning to life (09/2011): Most people don't realize that I am a world record holder who has beaten Mike Tyson and coached USU to many victories.

Mike Tyson loves pet pigeons (05/2011): The retired boxing champion, who is currently promoting his new movie The Hangover 2, revealed his love for his feathered pets and described them as family.

'Never take success for granted': Mike Tyson (04/2011): The former 'baddest man on the planet' gives words of wisdom at a presscon for a docu-drama on his passion for pigeons. -Philippine Daily Inquirer/ANN

Mike Tyson chokes up recalling a murdered friend (03/2011): Iron Mike went back to an old boxing gym while filming his reality show Taking on Tyson when he recollected how wild his life used to be. "I was a dope fiend, I didn't care about my life no more," he said of those years.

Mike Tyson elected to boxing shrine (12/2010): Mike Tyson, whose reign as the globe’s most feared heavyweight was followed by an epic fall from grace, was named for induction into the International Boxing Hall of Fame and Museum.