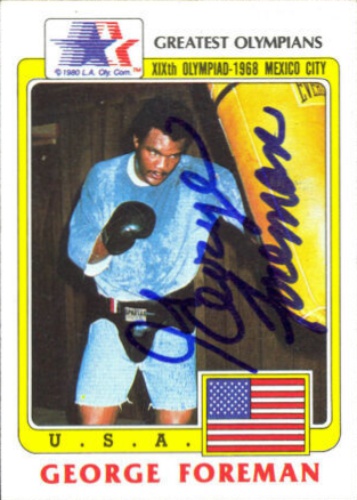 George Edward Foreman (born January 10, 1949) is an American former professional boxer, entrepreneur, minister and author. In boxing, he was nicknamed "Big George" and competed between 1967 and 1997. He is a two-time world heavyweight champion and an Olympic gold medalist. As an entrepreneur, he is known for the George Foreman Grill. More about George Foreman

Current items with a signature of George Foreman

These are the most current items with a signature of George Foreman that were listed on eBay and on other online stores - click here for more items.

Traded items with a signature of George Foreman

Most recently, these items with a signature of George Foreman were sold on eBay - click here for more items.

Foreman, Kovalev and the fight against boxing’s demons (02/04/19): There has never been a sporting comeback to rival the redemption ride of Big George. He was lucky. Thousands slip away from the boxing business and never end the chat with the talker in their head

George Foreman became business giant after boxing career | The Japan Times (12/07/18): Third in a three-part series In his book "Only in America: The Life and Crimes of Don King," the late author Jack Newfield noted that Sonny Liston had made

George Foreman iGrill glows, is USB-powered (04/09/15): George Foreman is branching out… again. He was a boxer (quite a good one, actually), then he was a showman, then he made grills. Now, he has lent his name to the iGrill, which serves as a storage device, food information despository, and temperature sensor.

George Foreman iGrill: Tunes ‘n Turf (04/08/15): One thing we hope this thing has in spades is insulation. It’s the George Foreman iGrill, and it really does have an iPod dock along with the capability to charbroil entire neighborhoods of beef and fish.

George Foreman iGrill glows, is USB-powered (04/2015): George Foreman is branching out… again. He was a boxer (quite a good one, actually), then he was a showman, then he made grills. Now, he has lent his name to the iGrill, which serves as a storage device, food information despository, and temperature sensor.

George Foreman's Son -- Off the Hook in Domestic Violence Case (11/2014): Prosecutors have thrown in the towel in the domestic violence case against George Foreman's son ... TMZ Sports has learned. We broke the story ... 23-year-old George Foreman the 5th was arrested back in February for allegedly choking his wife during… Permalink

Hottest Trainer 2014: Hot Trainer Contestant #6: George Foreman III (08/2014): Welcome to Racked Boston's search for the city's hottest trainer. Over the coming weeks, we'll profile eight smoking locals—fitness experts who not only look hot in spandex, but can make you look amazing too. Once you've gotten to know everyone,...

Bernard Hopkins -- 'What the Hell Is George Foreman Talking About?' (05/2014): Bernard Hopkins has nothing but respect for George Foreman -- but tells TMZ Sports the legend was DEAD WRONG when he told B-Hop to hang up his gloves and retire. Hopkins tells us he heard Foreman loud and clear when George called in to TMZ…

Hospital staff set fire to A&E department after cooking with George Foreman GRIL (03/2014): Hospital staff were given a grilling by firefighters after a George Foreman caused a fire at a busy A&E department. Firefighters were called to Wishaw General Hospital in Lanarkshire, Scotland, after the cooker was left unattended and food and grease ignited.

On this day: George Foreman wins world title at 46 (11/2013): Events, birthdays and anniversaries for 6 November

An Evening with George Foreman tickets on sale (10/2013): Brad Maule, who starred as "Dr. Tony Jones" for 22 years on "General Hospital," will host "An Evening With George Foreman" at 7 p.m. on Tuesday, Nov. 5, at the John D. Windham Civic Center in Center, Texas.

Boxer George Foreman to speak (09/2013): Sign up for our newsletter and have the top headlines from your community delivered right to your inbox.

The Many Shades of George Foreman (06/2013): The famed boxer and talks legacy and future plans.

George Foreman’s CNN interview (04/2013): Two-time heavyweight champion George Foreman did a wonderful interview with CNN while he was at The Venetian Macao for China’s two-time Olympic Gold Medalist Zou Shiming’s professional debut, which was promoted by Top Rank and televised in the U.S. on HBO 2.

George Foreman 1-on-1 (03/2013): I had the opportunity to ask the heavyweight champ about all things boxing, his new venture as a promoter, and that mean stare and flair for the camera.

Great Olympic Moments: Muhammed Ali, George Foreman and Teofilo Stevenson become (07/2012): Heavyweight boxing enjoyed a golden age from the 1960 Olympics in Rome through to the 1980 Games in Moscow

The Yankees are not George Foreman (06/2012): In most cities, winning baseball is accompanied by a reflection on things that the team in question is doing well. New York, and especially a select cadre of writers who cover the Yankees, however, is a very special circumstance.

Len at Work: Boxing with George Foreman (01/2012): Imagine learning how to box from a two-time heavyweight champion. KHOU 11 News Anchor Len Cannon got the chance to do just that, getting first-hand tips from none other than George Foreman.

'Joe Frazier wouldn't back away from King Kong': an appreciation (11/2011): By TIM DAHLBERG George Foreman's crushing right uppercut connected for the first time in Round 1 and, suddenly, the heavyweight champion of the world was on the canvas. At ringside, the shocking sight sent Howard Cosell into a frenzy.

Bernard Hopkins & George Foreman Post-Fight Quotes | BoxingInsider.com (05/2011): “[Beating the record] feels great. I did exactly what I wanted to do, which was break this record. I knew it was going to be a tough fight, but I wasn’t going to be denied. You don’t get a chance to do this too often.

George Foreman III Wins Again, “Monk” Now 12-0 (04/2011): By James Slater: Mixed in amongst the busy fight schedule of this past weekend, was a heavyweight bout held in Hampton, Virginia.

The Dish: George Foreman comes to Terra (03/2011): Boxing legend will sign gloves for his charity