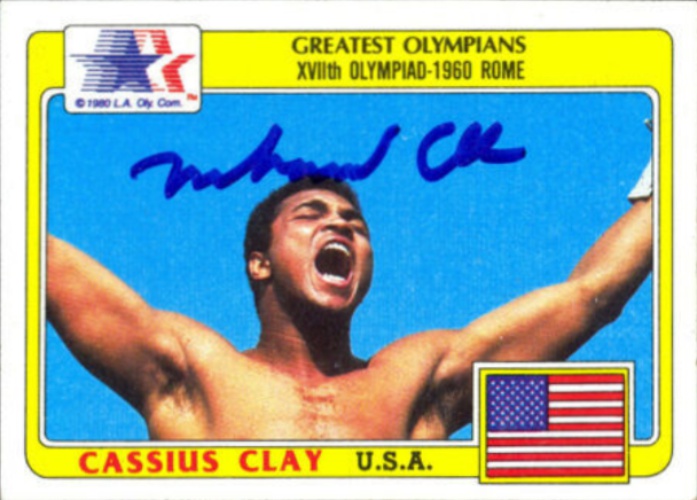 Muhammad Ali (/ɑːˈliː/; born Cassius Marcellus Clay Jr.; January 17, 1942 – June 3, 2016) was an American professional boxer and activist. Nicknamed "The Greatest", he is regarded as one of the most significant sports figures of the 20th century, and is frequently ranked as the greatest heavyweight boxer of all time. In 1999, he was named Sportsman of the Century by Sports Illustrated and the Sports Personality of the Century by the BBC. More about Muhammad Ali

Current items with a signature of Muhammad Ali

These are the most current items with a signature of Muhammad Ali that were listed on eBay and on other online stores - click here for more items.

Traded items with a signature of Muhammad Ali

Most recently, these items with a signature of Muhammad Ali were sold on eBay - click here for more items.

What's My Name | SpringHill Muhammad Ali Documentary Coming To HBO (02/11/19): Director Antoine Fuqua teams up with LeBron James and Maverick Carter to deliver the life and legacy of Muhammad Ali in his own voice.

Dutch boxer who fought Ali on road back from poverty in Bulgaria (02/09/19): Rudi Lubbers has been living in a van in Bulgari for the last two months

How Designer Marcelo Burlon County of Milan Developed A Mature Collaboration Wit (12/2018): Whether drawn by splendid designs or heartfelt recollections, or the curiosity of what will be the next big thing, streetwear has proven its sustainability in a volatile fashion marketplace.

Muhammad Ali rooting for Pacquiao against Mayweather (03/2015): Retired boxing legend Muhammad Ali shares the same flag with Floyd Mayweather but the former world heavyweight champion will be cheering for Manny Pacquiao come May 2 (May 3, PHL time).

Muhammad Ali's Best Productivity Tricks (12/2014): Muhammad Ali is certainly best known as a boxer, but he's also an incredibly productive, inspirational person. He's done a lot done in his life, so let's take a look at some of his best tips for gettings things done and enjoying life. Read more...

Muhammad Ali's legendary Rumble in the Jungle 40 years on (10/2014): Four decades on and the Rumble in the Jungle is still remembered as one of the most momentous events in sporting history. The fight sealed the reputation of Muhammad Ali - previously stripped of his heavyweight boxing title for his refusal to fight in the Vietnam War - as a boxing legend.

According to Deontay Wilder’s Logic, He’d Destroy Young Muhammad Ali or Mike Tys (03/2014): Deontay Wilder says the wildest things. No one under 6 feet 5, he brags, has a chance against him. None of those little guys, he says, can deal with his height and size. Undefeated Wilder is 6 feet 7.

Muhammad Ali's wife Lonnie stopped me seeing my father, says son (01/2014): Muhammad Ali Junior, 41, who lives in a rough Chicago neighbourhood, claims he couldn't even get through on the phone to wish his father a happy 72nd birthday earlier this month.

Basketball documentary premieres at Muhammad Ali Center (12/2013): The Louisville premiere of the sports documentary "Red Versus Blue" was shown Sunday.

Muhammad Ali awards to honor humanitarian efforts (08/2013): FILE/Mark Humphrey/ap Boxing great Muhammad Ali, with his wife, Lonnie, waves to friends attending a celebration for his 70th birthday at the Muhammad Ali Center in Louisville, Ky., in 2012.

IMG Brokers Deal With Double D for Adidas - Muhammad AliBoxing Collection (05/2013): In a multi-year partnership brokered and managed by IMG Licensing, a division of IMG Worldwide, the global sports, fashion and media company, Muhammad Ali Enterprises has teamed up with Double D, the exclusive ...

Dundee estate selling Muhammad Ali gloves (11/2012): Gloves from two of Muhammad Ali's biggest fights are among items being auctioned off by the estate of his former trainer, Angelo Dundee.

Kevin Pietersen is cricket's answer to Muhammad Ali: Viv Richards (10/2012): Richards believes the English batsman has got the 'X-factor' to respond to his critics.

Sports Rewind: Muhammad Ali Honored (09/2012): Enter your email address below and we will send you a link to reset your password.

Former Olympian Muhammad Ali to be honored in London (06/2012): A sports charity says boxing great Muhammad Ali will attend a London gala benefit in his honor two days before the Summer Olympics.

Actual Footage of Muhammad Ali training at the camp (05/2012): An Avid boxing fan, talks about his first-hand experience in visiting the camp and watching Ali in action when he was training at the gym. His brothers, and friends, often made the 35 mile trip from Allentown to watch his workouts.

Muhammad Ali and the First Amendment (01/2012): As 'The Greatest' boxing champion turns 70, here's a look back at how his life exemplified our five core freedoms.

Joe Frazier Dead: Muhammad Ali Reacts (11/2011): Joe Frazier has died and his former boxing opponent, Mohammad Ali has released a statement. The boxing great passed away within days after announcing that he had liver cancer and was on Hospice care. . . .

Video Vault: Muhammad Ali in Cleveland (10/2011): The Greatest. Muhammad Ali . The two are never far apart. In Cleveland, Ali defended his title, boxed for charity and bought a building to be used for a temple.

Muhammad Ali vs. Jimmy Ellis: The Inevitable Fight - 40 Years On (07/2011): By Tom Gray: Muhammad Ali awoke on July 26th 1971 with a different feeling in his stomach than what would normally be the case before fight night. The contest in question would be his thirty third in eleven years and would take place at the Houston Astrodome in Texas in front of a capacity crowd.

'Long Lost Movie' Gives a New Perspective to 1970s Muhammad Ali (06/2011): In 1966, Muhammad Ali refused to report to an Army induction center when he was drafted to fight in Vietnam, explaining: “I ain’t got no quarrel with them Viet Cong. They ain’t never called me [N-word].” At the time, he was undefeated and the undisputed Heavyweight Champion of the World.

Greatest of All Time: A Tribute to Muhammad Ali encapsulates the boxing legend’s (05/2011): They say man is born to fight. We come into this world with clenched fists much like a boxer. Boxing, they say, is a noble art. But only a few make it to the ring, fewer become champions and only one can be crowned the heavyweight champion of the world. Muhammad Ali was one of them.

Art rehashes Muhammad Ali's gloried past (04/2011): A new installment in Los Angeles forms the face of a multifaceted athlete.

Muhammad Ali: The greatest monument to the great one (03/2011): When you’re the greatest of all time people make a big fuss about you.

Elvis and Muhammad Ali featured at Michener (02/2011): In February 1973, Elvis Presley gave Muhammad Ali a robe embroidered with the words, "The People's Champion." In return, Ali presented Elvis with a set of boxing gloves inscribed "You're the Greatest."