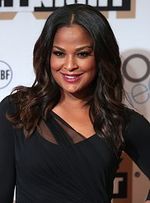 Laila Amaria Ali (born December 30, 1977) is an American television personality and former professional boxer who competed from 1999 to 2007. She is the daughter of Muhammad Ali and is the eighth of her father's nine children. During her career, from which she retired undefeated, she held the WBC, WIBA, IWBF and IBA female super middleweight titles, and the IWBF light heavyweight title. More about Laila Ali

Current items with a signature of Laila Ali

These are the most current items with a signature of Laila Ali that were listed on eBay and on other online stores - click here for more items.

Traded items with a signature of Laila Ali

The most expensive item with a signature of Laila Ali (Boxing gloves signed by Muhammad and Laila Ali) was sold in November 2013 for $500.00 while the cheapest item (LAILA ALI BOXING AUTOGRAPHED CARD) found a new owner for $0.99 in January 2013. The month with the most items sold (11) was June 2016 with an average selling price of $24.99 for an autographed item of Laila Ali. Sold items reached their highest average selling price in October 2019 with $149.99 and the month that saw the lowest prices with $0.99 was March 2009. In average, an autographed item from Laila Ali is worth $24.95.

Most recently, these items with a signature of Laila Ali were sold on eBay - click here for more items.

Laila Ali, Muhammad Ali's daughter, coming to the University of the Cumberlands (02/04/19): Laila Ali is a four-time boxing World Champion herself.

Maldives opposition leader Mohamed Nasheed's wife Laila Ali seeks India's help (03/20/15): The wife of jailed Maldives opposition leader Mohamed Nasheed has made an emotional appeal to Prime Minister Narendra Modi, saying India needs to step in to get her husband out of prison and that she fears that plans are afoot to murder the former President in custody.

Ronda Rousey’s response to Laila Ali’s verbal jab: ‘I’m around’ (03/12/15): The UFC star sounds ready to take on all comers, including the daughter of Muhammad Ali, an undefeated ex-boxer in her own right.

UFC Women's Champ Ronda Rousey Hits Back at Laila Ali (03/2015): Ronda Rousey and Laila Ali have had fun sparring in the media over who’s the better fighter.

Laila Ali weighs in on boxing, father and empowering women (03/2014): Her father was "The Greatest," but Laila Ali says with the right mindset anyone can achieve their full potential.

Laila Ali: My Dad 'Lights Up' When He Sees His Grandkids (01/2014): Laila Ali says her legendary father Muhammad Ali gets a kick out of her son Curtis Jr., 5, and daughter Sydney, 2.

VIRGINIA THIS MORNING: Laila Ali (06/2013): Aging is part of life, but it’s how you embrace it can make all the difference.

Post-Baby Fab!: Laila Ali Reveals Running Is The Key To Her Bikini Body (05/2013): She's a knockout! Second-time mom Laila Ali revealed her slim and trim bikini body for 'PEOPLE,' and the best part? She's sharing her secrets! She tells the magazine how she got back into fighting shape after giving birth to her daughter, Sydney in 2011.... More »

Laila Ali dishes on healthy swaps and new campaign Healthy Mouths, Healthy Lives (04/2013): As a champ, wife, mother, and entrepreneur, Laila Ali has made staying fit and healthy a lifestyle choice for her entire family. She’s also making a oral health a priority with her kids and is now involved with the national …

I’m A Triathlete: Laila Ali (10/2012): Photo: Matt Peyton/AP Images The former boxer trades her gloves for goggles as she takes on triathlon.

Fit Links: Laila Ali's Triathlon Training Tips, Best And Worst Bars And More (07/2012): Boxer Laila Ali just completed a triathlon, and shares her top training tips with Fit Bottomed Mamas. They're convenient on-the-go snacks, but are they really as healthy as you think?