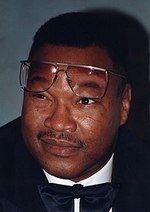 Larry Holmes (born November 3, 1949) is an American former professional boxer who competed from 1973 to 2002. He grew up in Easton, Pennsylvania, which led to his boxing nickname of the Easton Assassin. More about Larry Holmes

Current items with a signature of Larry Holmes

These are the most current items with a signature of Larry Holmes that were listed on eBay and on other online stores - click here for more items.

Traded items with a signature of Larry Holmes

The most expensive item with a signature of Larry Holmes (MUHAMMAD ALI & LARRY HOLMES Signed 1980 The Ring Magazine Cover w/ Beckett LOA) was sold in December 2020 for $399.95 while the cheapest item (Larry Holmes SIGNED Program - Diplomat Hollywood) found a new owner for $0.01 in June 2008. The month with the most items sold (22) was May 2020 with an average selling price of $46.50 for an autographed item of Larry Holmes. Sold items reached their highest average selling price in July 2012 with $109.99 and the month that saw the lowest prices with $5.50 was February 2017. In average, an autographed item from Larry Holmes is worth $34.00.

Most recently, these items with a signature of Larry Holmes were sold on eBay - click here for more items.

Danny Aiello, Larry Holmes duke it out over upcoming Mayweather fight (03/16/15): The Broadway actor and former boxing champ debated over who will win the upcoming match between Floyd Mayweather and Manny Pacquiao.

Larry Holmes donates optical reader to Association for the Blind in 1990 - Alman (01/30/15): Man leaves explanatory note after pilfering from church poor box in 1915.

Larry Holmes' building sold for Internet incubator (12/19/14): An online entrepreneur who said he has been impressed by Easton's growth over the past few years has bought Larry Holmes' downtown building and will open an online business incubator there.

'Cake Boss' co-star delivers cake to Larry Holmes' Champ's Corner in Easton (11/2014): The appearance by Mauro Castano was to promote an event at the Easton restaurant on Friday night.

Joseph Parker paid hotel visit by Larry Holmes (08/2014): Joseph Parker has a blossoming friendship with Larry Holmes after the former world champion turned up unexpectedly at the Kiwi's hotel on the eve of his heavyweight fight to pay him "the ultimate compliment".

Larry Holmes statue still on hold while fundraising continues, spokeswoman says (03/2014): The answer to the question where is the statue hasn't changed in two years.

FLASHBACK: In 1978, Larry Holmes makes his first title defense (11/2013): A weekly look back at sports in the Lehigh Valley, in anniversaries of multiples of five.

Body pulled from Lehigh River near Larry Holmes Drive in Easton (07/2013): Police were called about 7:30 this morning.

Three cars involved in accident on Larry Holmes Drive in Easton - SEE PHOTOS (02/2013): At least one injury occurred in the crash.

Jose Ribalta: I Boxed A Legend…Larry Holmes (11/2012): Jose Ribalta was 30 when he boxed Larry Holmes in 1993 at Bay St. Louis in Mississippi. Ribalta had a record of 32-9-1 and was still a respected contender while Holmes, 43 at the time, was looking for one last world title shot and payday.

Larry Holmes on Rocky: ‘The man was tough’ (09/2012): ‘Easton Assassin’ Larry Holmes, who spent eight years as a champion heavyweight, will be in Brockton to commemorate the Rocky Marciano statue’s unveiling

LETTER: Good to see Larry Holmes back in Downtown Easton (08/2012): Larry Holmes ’ Ringside Restaurant is returning to its home on Larry Holmes Drive and I am hoping Easton responds well to this landmark. Larry and Diane have stayed committed to the city of Easton and deserve a first-class welcome back.

Flashback: In '02, 52-year-old Larry Holmes beats Butterbean in his last fight (07/2012): A weekly look back at sports in the Lehigh Valley, in anniversaries of multiples of five.

Revival Fire Ministries allowed to move to old Larry Holmes restaurant (04/2012): At Monday night's zoning hearing board, zoners approved a conditional use permit for the ministries managed by Holmes' daughter.

Heavyweight Great Larry Holmes Says History Will Remember Mayweather As the Bad (03/2012): By James Slater: Years from now, how will the historians of our great sport judge things if the super-duper-mega-fight we all want to see happen never actually takes place? I’m talking of course about Floyd “Money” Mayweather against Manny Pac-Man Pacquiao.

Heavyweight Great Larry Holmes Says He “Feels Sorry” For Boxing Today (01/2012): By James Slater: Strangely enough, back when all-time great Larry Holmes was plying his trade in the late ‘70s and early-to-mid 1980s, fans and experts were complaining how the heavyweight division was on its downside; that the great fighters had pretty much all gone.

Boxing greats, including Muhammad Ali and Larry Holmes, pay last respects to Joe (11/2011): By DAN GELSTON PHILADELPHIA — With his championship belt and a pair of gloves draped over his casket, Joe Frazier was going one more round.

Larry Holmes moving club to former Canal Street gym (09/2011): Holmes confirmed today that he plans to relocate his bar and restaurant from the Larry Holmes Enterprises building to his former gymnasium and training center at 228 W. Canal St. He closed the gym about two months ago and officially put 91 Larry Holmes Drive up for sale about two days ago.

First Lady's African adventure coming to our living rooms; Larry Holmes worked h (06/2011): Although the nation’s misery index has reportedly surpassed that of the Carter years, there is good news in store. Can’t afford a family vacation? Stewing about property tax increases as your property value is in freefall?

Larry Holmes is tabbed as speaker at annual CMR scholarship dinner (01/2011): DARTMOUTH — The Center for Marketing Research (CMR) at the University of Massachusetts Dartmouth is proud to announce that heavyweight champion Larry Holmes will be the celebrity speaker at their 11th Annual Celebrity/Scholarship Dinner on April 6,...