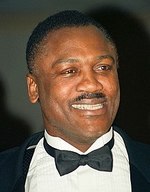 Joseph William Frazier (January 12, 1944 – November 7, 2011), nicknamed "Smokin' Joe", was an American professional boxer who competed from 1965 to 1981. He reigned as the undisputed heavyweight champion from 1970 to 1973, and as an amateur won a gold medal at the 1964 Summer Olympics. Frazier was known for his strength, durability, formidable punching power, and relentless pressure fighting style. He was also the first boxer to beat Muhammad Ali. More about Joe Frazier

Current items with a signature of Joe Frazier

These are the most current items with a signature of Joe Frazier that were listed on eBay and on other online stores - click here for more items.

Traded items with a signature of Joe Frazier

Most recently, these items with a signature of Joe Frazier were sold on eBay - click here for more items.

Long-Awaited Joe Frazier Statue Taking Shape (04/08/15): The statue should be finished by the end of this month, but it'll be a while before it's seen in public.

Joe Frazier's confidant has found a home with UFC (09/17/14): Burt Watson speaks in a gravelly voice and says it wasn't always like that. His job changed his voice, he said. Most weekends, somewhere in the world, this West Philadelphia native, an Overbrook High graduate, starts yelling, "Let's roll!"

Joe Frazier statue going up in Philadelphia (09/03/14): PHILADELPHIA (AP) – Busloads of tourists line up every day in Philadelphia to take photos with a statue of Rocky Balboa, the fictional heavyweight fighter made famous by Sylvester Stallone.

Joe Frazier statue near to completion and will be unveiled next year in Philadel (08/2014): The long-awaited statue of Joe Frazier is fast approaching completion. It is now beginning the five-month bronzing procedure prior to an unveiling n Frazier’s home city of Philadelphia next April.

Down Goes Terror: How A Frightened George Foreman Shocked Joe Frazier (07/2014): Excerpted from Bouts of Mania: Ali, Frazier, and Foreman—and an America on the Ropes . Read more...

$15,000 reward offered in '09 murder of Joe Frazier's grandson (06/2013): Four years ago, late heavyweight champ Joe Frazier lost a grandson to murder, and police are still looking for his killer.

Jury trial for Joe Frazier scheduled to begin on Monday, March 11th (03/2013): MILWAUKEE (WITI) — One of five people accused of plotting to kill two Milwaukee police officers will be in court...

Joe Frazier Almost Drowned On National Television 40 Years Ago Today (02/2013): Forty years ago today, ABC Sports broadcast The Superstars , an all-around sports competition that pit elite athletes from different sports against one another in a decathlon-style series of contests.

The Son of Legendary Boxer Joe Frazier Makes Reality TV Debut (01/2013): An avid entertainer, Frazier is anxious to get his name and face out there to the world, while at the same time sharing his story and personal achievements through overcoming his own adversities.

Stan Hochman: Fundraiser in works for Joe Frazier statue (10/2012): JOE FRAZIER beat Muhammad Ali. March 8, 1971, Madison Square Garden. Knocked him down in the 15th round with a brutal left hook that left Ali's jaw as lumpy as a bag of peanuts.

Donations sought for Joe Frazier statue (09/2012): PHILADELPHIA, Sept. 13 (UPI) -- Efforts are under way to raise $150,000 in private donations for a statue of the late heavyweight boxing champion Joe Frazier in Philadelphia, organizers say.

Gift from an Angel: Smokin’ Joe Frazier (04/2012): SIMI VALLEY—Memories of our friends, especially professional boxers who move on to better things in heaven, are usually sweet and maybe even bittersweet.

Sporting obituaries for 2011: Graham Dilley, Fred Titmus, Joe Frazier, Trevor Ba (12/2011): The sporting world lost a number of greats in 2011 - here the performers who knew them describe what a loss they are.

38 Years Ago Today: George Foreman Brutalises Joe Frazier To Capture World Heavy (01/2011): By James Slater: Not since the fearsome Charles “Sonny” Liston had dispatched Floyd Patterson almost ten years earlier, had a heavyweight title challenger so quickly and brutally relieved a defending champion of his crown.