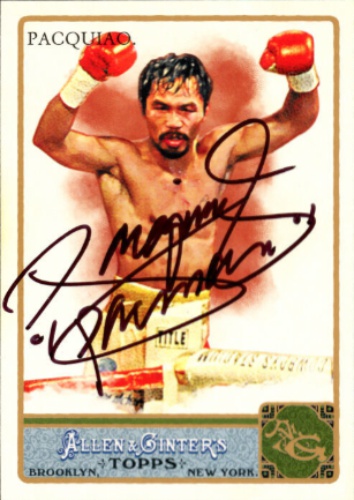 Emmanuel Dapidran Pacquiao Sr., CLH (locally ; born December 17, 1978) is a Filipino politician and former professional boxer. Nicknamed "PacMan", he is regarded as one of the greatest professional boxers of all time. He previously served as a Senator of the Philippines from 2016 to 2022. More about Manny Pacquiao

Current items with a signature of Manny Pacquiao

These are the most current items with a signature of Manny Pacquiao that were listed on eBay and on other online stores - click here for more items.

Traded items with a signature of Manny Pacquiao

The most expensive item with a signature of Manny Pacquiao (2011 TOPPS MARQUEE MANNY PACQUIAO ON CARD CERTIFIED AUTOGRAPH BOXING CHAMPION) was sold in January 2022 for $4999.99 while the cheapest item (★ MANNY PACQUIAO SIGNED AUTO KEY CARD OSCAR DE LA HOYA MGM GRAND DREAM MATCH NR!) found a new owner for $0.88 in July 2013. The month with the most items sold (41) was January 2019 with an average selling price of $42.00 for an autographed item of Manny Pacquiao. Sold items reached their highest average selling price in February 2012 with $400.00 and the month that saw the lowest prices with $1.57 was July 2013. In average, an autographed item from Manny Pacquiao is worth $65.00.

Most recently, these items with a signature of Manny Pacquiao were sold on eBay - click here for more items.

Manny Pacquiao trying to discourage son from boxing (02/21/19): Manny Pacquiao's son, Jimuel, made a boxing video that gained steam over the past couple of weeks.

Manny Pacquiao is Discouraging His 18-Year-Old Son From Pursuing Boxing (02/21/19): Boxing legend Manny Pacquiao does not want his 18-year-old son Jimuel to pursue a career in boxing.

Manny Pacquiao Is Discouraging Son From Pursuing Boxing Careeer (02/21/19): Pacquiao is putting his foot down. Manny Pacquiao is one of the biggest and best boxers to ever do it. He most recently defeated Adrien Broner in the ring and has fought some other pretty legendary boxers such as Floyd Mayweather. Pacquiao's status as a legend has already been cemented and he is muc

Manny Pacquiao trying to discourage son from boxing (02/2019): Manny Pacquiao's son, Jimuel, made a boxing video that gained steam over the past couple of weeks.

Pacquiao Wants To Return in May, Rejects Horn Rematch (01/2019): Eight division world champion Manny Pacquiao would like to return to the ring on a date in May or July. Pacquiao, 40-years-old, was back in the ring on January 19th, when he dominated Adrien Broner over twelve rounds at the MGM Grand in Las Vegas. It was Pacquiao's first bout in the United States in

Manny Pacquiao 'discouraging' son from getting into boxing, following in his foo (11/2016): Pacquiao would rather his son stay away from the gloves

Manny Pacquiao back in LA to start training for May 2 super-fight (02/2015): Filipino boxing champion Manny Pacquiao has arrived in Los Angeles to begin his training for his fight against the undefeated American boxer Floyd Mayweather Jr.

How Manny Pacquiao continues to coach Kia while training for fight (10/2014): With three weeks left before his fight with Chris Algieri, boxing superstar Manny Pacquiao is busier than ever in whipping himself to shape.

Boxers Manny Pacquiao and Chris Alegeri take their swings in a batting cage (08/2014): The fighters took their gloves off and picked up bats to duke it out in San Francisco.

Manny Pacquiao to quit boxing for 2016 Senate run? (07/2014): Will Manny Pacquiao finally hang up his gloves to seek higher office?

ALBERT PAGARA, THE NEXT MANNY PACQUIAO (06/2014): Albert Pagara had an excellent boxing stint at Cagayan de Oro City being undefeated in all his amateur bouts. While his father Reynaldo is from CDO ...

Manny Pacquiao seeks to become basketball champ (05/2014): Manila (AFP) - Being world boxing champ, a heavyweight politician, an actor and a preacher is not enough for the Philippines' irrepressible Manny Pacquiao -- now he wants to be a professional basketballer.

Floyd Mayweather may be king of the ring but fans are losing interest - they wan (04/2014): When the big fights don’t happen the public lose faith. That is happening with Floyd Mayweather - he's not giving them what they want and that is a fight against Manny Pacquiao.

Amir Khan willing to face Manny Pacquiao (12/2013): THEY once shared the same trainer, the same gym, helping each other out in preparation for upcoming fights as sparring partners.

After friend Margarito failed, can Brandon Rios beat Manny Pacquiao? (10/2013): Does Brandon Rios, right, have a legitimate chance at defeating Manny Pacquaio, left, when the two meet in the ring next month in Macao? ( Mary Altaffer / Associated Press / August 6 , 2013 )

The Defeats of Manny Pacquiao Would Serve Him Best (09/2013): On June 9, 2012, at the MGM Grand Garden Arena in Paradise, Nevada, Timothy "Perfect Storm" Bradley won a highly controversial split decision over M ...

Beautiful Person Gwyneth Paltrow Apparently Wants To Sing A Duet With Manny Pacq (04/2013): Gwyneth Paltrow and Manny Pacquiao in the recording booth together? Pacquiao, the eight-division boxing champion and congressman in the Philippines, has a well-documented career in music.

MANNY PACQUIAO LIKES NEXT FIGHT IN THE PHILIPPINES OR SINGAPORE (01/2013): Exclusive On www.mannypinol.com! Filipino boxing icon Manny Pacquiao, trying to pick up the pieces following his shocking loss to nemesis Juan ...

Inside Sports - Manny Pacquiao Still Remains The Greatest Filipino Fighter (12/2012): We find it distasteful to say the least for people to suddenly turn against Manny Pacquiao because of his unfortunate loss to Juan Manuel Marquez an ...

Manny Pacquiao back in the ring preparing for Marquez (10/2012): On Dec. 8 at the MGM Grand in Las Vegas, former eight-division world champion Manny Pacquiao will meet Juan Manuel Marquez in the ring for the fourth time.

1. Manny Pacquiao (07/2012): The swimming pool’s loss is the entertainment world’s gain! Enchong was part of the national team and competed abroad, but it looks like he’s enjoying his new career as a TV and movie star now. With lots of projects, including endorsement deals, plus hordes of fans, how can he not, right?

Manny Pacquiao v Timothy Bradley: WBO Order Rematch (06/2012): The World Boxing Organization has order a rematch between Manny Pacquiao and Timothy Bradley after a five-man panel scored unanimously in favour of the Filipino fighter following his controversial defeat on 9 June.

Celebrities, Family Visit Manny Pacquiao At Wild Card (05/2012): MANILA, Philippines - Not only his family but even big celebrities have visited boxing champ Manny Pacquiao while he's on training at the Wild Card Gym in the US.

Boxing against the odds in pursuit of the next Manny Pacquiao (04/2012): Filipino boxing sensation Manny Pacquiao may be an eight-time world champion but he didn't have the skills to make it as an amateur.

Manny Pacquiao's Wife -- Secrets of Sex and Boxing (02/2012): Manny Pacquiao's wife Jinkee says the Pac-Man is too wiped out after fights to go another round in the bedroom -- but karaoke? Well, that's a whole other story. Check out TMZ on TV -- click here to see your local listings!

Manny Pacquiao: Who will He Fight Next? Mayweather, Ortiz, or Marquez? (11/2011): The welterweight division is up for grabs.

Phil Anselmo: Can Manny Pacquiao Really Beat Floyd Mayweather? | BoxingInsider.c (07/2011): Alright. If you’ve read my writing before, this is old news, but I am (or can be) a very biased writer. I love the great sport of boxing and it’s zany characters that define it.

Jeff Powell: Manny Pacquiao, Floyd Mayweather, Sergio Martinez and the biggest a (06/2011): Boxing, like all sports, is a fount of passionate opinions. Many of them are poured out around the world as well as at ringside and it is almost impossible to reach an absolute consensus.

Manny Pacquiao: His political career (05/2011): Politics, and not boxing, is now Manny Pacquaio's first passion, according to his fellow politicians.

Manny Pacquiao on Jimmy Kimmel Live (04/2011): Everyone was excited to watch boxing champ and congressman Manny “Pacman” Pacquiao during the April 28 episode of Jimmy Kimmel Live. It was the fourth time the Filipino boxing superstar guested on the late night talk show.