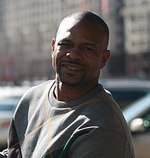 Roy Levesta Jones Jr. (born January 16, 1969) is an American-born former professional boxer, boxing commentator, boxing trainer, rapper, and actor who holds dual American and Russian citizenship. He competed in boxing from 1989 to 2018, and held multiple world championships in four weight classes, including titles at middleweight, super middleweight, light heavyweight and heavyweight, and is the only boxer in history to start his professional career at junior middleweight and go on to win a heavyweight title. As an amateur he represented the United States at the 1988 Summer Olympics, winning a silver medal in the junior middleweight division after one of the most controversial decisions in boxing history. More about Roy Jones, Jr.

Current items with a signature of Roy Jones, Jr.

These are the most current items with a signature of Roy Jones, Jr. that were listed on eBay and on other online stores - click here for more items.

Traded items with a signature of Roy Jones, Jr.

The most expensive item with a signature of Roy Jones, Jr. (ROY JONES JR SIGNED AUTHENTIC IBF BOXING BELT TRI STAR CERTIFIED HOLOGRAM) was sold in July 2014 for $1250.00 while the cheapest item (ROY JONES JR AUTOGRAPHED 1996 LIVE FROM MADISON SQUARE GARDEN FIGHT POSTER 40X27) found a new owner for $0.99 in February 2015. The month with the most items sold (40) was January 2008 with an average selling price of $33.51 for an autographed item of Roy Jones, Jr.. Sold items reached their highest average selling price in June 2018 with $149.99 and the month that saw the lowest prices with $13.74 was June 2009. In average, an autographed item from Roy Jones, Jr. is worth $49.95.

Most recently, these items with a signature of Roy Jones, Jr. were sold on eBay - click here for more items.

Roy Jones Jr: ‘We did our thing and we gotta move on now’ (12/09/18): Roy Jones Jr gives his thoughts after HBO’s final boxing broadcast.

Roy Jones Jr.: Michael B. Jordan and I Laughed Off His Boxing Challenge (12/08/18): A few weeks after answering the 'Creed II' star’s challenge for a match, the former world champion updates that there will be no real fight between the two of them.

Roy Jones Jr. Says He Spoke With Michael B. Jordan About Boxing Match (12/07/18): 'We laughed about it. It's a fun thing.' Boxing legend Roy Jones Jr. was quick to challenge Creed II star Michael B. Jordan to a boxing match if he really wanted all the smoke, but it doesn't look like that'll be the case. In case you missed it, the 31-year old actor was asked last month if there we

Roy Jones Jr. blasts 'boring' Mayweather (12/2014): Former multi-division world champion Roy Jones Jr. lashed out at Floyd Mayweather Jr. for his "boring" style of fighting, claiming that not even a victory over Manny Pacquiao can redeem the American champion in his eyes.

Roy Jones Jr. on Pacquiao-Algieri (11/2014): Legendary champion Roy Jones Jr. breaks down Saturday’s Manny Pacquiao-Chris Algieri PPV clash in Macau. “I see it being a good fight,” said Jones, who will be commentating on the fight for HBO PPV. “You’ve got two fighters.

Cap that! Perth boxer's lesson from Roy Jones Jr (08/2014): A Perth boxer looking to make his way in America received a tuition beyond his wildest dreams recently when he met up with Roy Jones Jr.

Roy Jones Jr.'s Sexting Technique Is Very On-Brand [NSFW] (06/2014): Roy Jones Jr. has allegedly been sending dick pics to a female boxer named Stacy Reile. He appears to have done something to make Reile angry, because she spent the last few days slagging him on her Instagram page, and now nude photos of Roy Jones Jr. have leaked onto the internet . Read more...

Roy Jones Jr. on Working With Jean Pascal (01/2014): The legend gives advice to the young boxer.

Roy Jones, Jr: I’m my own man! (12/2013): Just hours before end of 2013, Fightnews.com caught up with Roy Jones, Jr. to discuss his upcoming plans in light of Anderson Silva breaking his leg in UFC 168 and the numerous Internet reports regarding other potential RJJ opponents.

Roy Jones Jr. confirms ring return, with one eye on Anderson Silva (10/2013): Boxing legend Roy Jones Jr has conformed he will return to action in December against former cruiserweight contender Bobby Gunn. “A date hasn’t been set but it’s supposed to happen in Philadelphia.”

Boxing Insider Notebook: Purdy vs. Alexander, Kessler, Roy Jones Jr., Hopkins vs (04/2013): The following is the Boxing Insider notebook for the week of April 15th to April 22nd covering the comings and goings in the sport of boxing that you might have missed.

Listen: Craig Miller With Roy Jones Jr . (03/2013): Roy Jones Jr . is the former Heavyweight Champion of the World and is HBO’s ringside analyst. He joined Craig Miller to preview the fight between Timothy Bradley and Ruslan Provodnikov, which can be se

Controversy in Poland: who will fight Roy Jones Jr? (06/2012): “I don’t care who they will put in front of me – I’m a professional fighter, this is what I do – I fight to win,” said four-division world champion legendary Roy Jones Jr (55-8, 40 KOs) during final press conference in Warsaw before fighting…and this is the question – who?

Is Roy Jones Jr. Ducking The Celtic Warrior For A Second Time In His Career? (02/2012): Over the past few weeks, there has been much buzz circulating around the boxing world about a matchup between former world champion Roy Jones Jr. an ...

Roy Jones Jr to Pacquiao: Call me (09/2011): MANILA, Philippines – Former heavyweight champion Roy Jones Jr. is ready to offer his words of wisdom to pound-for-pound king Manny "Pacman" Pacquiao, should the Filipino champion ever need it.

Roy Jones Jr. Is Doing Damage to Reputation and Self (05/2011): The one-time best pound-for-pound fighter now 42 was knocked unconscious over the weekend for his third-straight defeat.

Veteran Roy Jones Jr. agrees to Denis Lebedev fight in May (03/2011): Roy Jones Jr., despite losing three of his last five fights and two in a row in lopsided fashion, will continue his boxing career in a fight against rugged cruiserweight contender Denis Lebedev.