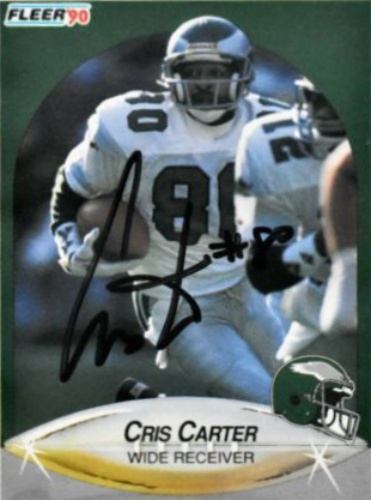 Graduel Christopher Darin Carter (born November 25, 1965) is a former American football wide receiver who played in the National Football League (NFL) for the Philadelphia Eagles (1987–1989), the Minnesota Vikings (1990–2001) and the Miami Dolphins (2002). He is widely regarded as one of the greatest wide receivers of all time. More about Cris Carter

Current items with a signature of Cris Carter

These are the most current items with a signature of Cris Carter that were listed on eBay and on other online stores - click here for more items.

Traded items with a signature of Cris Carter

If you're interested in Cris Carter Rookie cards you might want to take a look at our sister site that specializes in Football Rookie Cards only.

The most expensive item with a signature of Cris Carter (Game Worn Used Signed 2000 Playoff Minnesota Vikings HOFer Cris Carter Jersey) was sold in January 2020 for $4199.99 while the cheapest item (Vikings CRIS CARTER Signed Card) found a new owner for $0.01 in October 2009. The month with the most items sold (33) was March 2022 with an average selling price of $44.95 for an autographed item of Cris Carter. Sold items reached their highest average selling price in March 2019 with $201.01 and the month that saw the lowest prices with $1.05 was July 2016. In average, an autographed item from Cris Carter is worth $37.00.

Most recently, these items with a signature of Cris Carter were sold on eBay - click here for more items.

Former Ohio State wide receiver Cris Carter to appear in ‘NFL Icons’ docuseries (08/02/22): This should be well worth a watch and include never before seen video, interviews, and more on former #GoBucks great Cris Carter.

Cris Carter had a huge impact on Damon Arnette's decision to return to Ohio Stat (02/11/19): Damon Arnette was set on leaving for the NFL until he received a call from Cris Carter.

Cris Carter: Never put stickum on hands because God already did (03/09/15): Cris Carter never used stickum -- unless you count what God put on his hands.

Colts sign Cris Carter's son to contract (02/2015): The much-traveled Duron Carter, also a wide receiver, finally gets a shot at the NFL.

Cris Carter on Josh Gordon: 'I'm only going to talk about players in the league' (01/2015): Cris Carter claims there's a reason why he hasn't met Josh Gordon.

Report: Seahawks interested in CFL WR Duron Carter, Cris Carter's son (12/2014): Interesting, if unsurprising, news that the Seahawks are among the NFL teams that have shown interest in receiver Duron Carter, a former Ohio State player who is coming off a big season with Montreal in the CFL.

Cris Carter's Wife -- TENNIS MATCH TURNS VIOLENT ... Allegedly Headbutted Over L (04/2014): Cris Carter's wife says she was HEADBUTTED by another woman at a tennis match in Boca Raton that got super-violent ... and it's all over a dispute over a line call. The NFL Hall of Famer's wife, Melanie Carter, was playing in a doubles match at…

Cris Carter says Lions need more than No. 2 receiver for Megatron (01/2014): The Detroit Lions have been searching for a complement to Calvin Johnson for years, but Hall-of-Fame receiver Cris Carter said today that the team has more pressing needs than finding a No.2 pass catcher.

Moon talks Cris Carter, young quarterbacks, and more (08/2013): If you aren’t watching PFT Live every weekday at noon ET or clicking the box on the right rail any time of the day or night for the full show or, as the final fallback, downloading the audio in podcast format on iTunes (our sponsors prefer that you watch the show . . . and…

Cris Carter Hall of Fame bound (07/2013): Former Minnesota Vikings player Cris Carter will be inducted into the Pro Football Hall of Fame on Saturday, in Canton, Ohio. Carter spent 12 of his 16 years in the NFL with the Vikings. The wide receiver was always a fan favorite.

Middletown dedicates field to Cris Carter (05/2013): Five blocks from where he grew up, Cris Carter Field at Barnitz Stadium was dedicated on a warm, sea-blue sky of a day in a ceremony Tuesday afternoon that left many of the 250 people wondering how in the world Canton was going to top this.

Cris Carter's son to get chance with Vikes (04/2013): Wide receiver Duron Carter, who went undrafted, is following in his father's footsteps and is going to get a chance with the Minnesota Vikings.

Cris Carter says the Vikings are ‘better off’ (03/2013): The Vikings great thought the organization did the right thing in moving Percy Harvin, and he liked what the team got in return.

Web Extra: Hall Of Famer Cris Carter's Keys To Success (02/2013): On Fe bruary 2nd former Vikings wide receiver Cris Carter was voted to the pro football Hall Of Fame. There was a press conference Thusday at Vikings headquarters and Cris talked about his keys to success.

Cris Carter: Never seen a player like RGIII (10/2012): This is going to be another week of extravagant RGIII praise, which is more fun than anguished Jim Haslett flagellation, all in all. Let’s start with Cris Carter, who appeared on ESPN Radio’s Mike and Mike thing Monday morning. Read full article >>

Cris Carter: I made payments for protection, not injuries (05/2012): Former NFL wide receiver Cris Carter clarified his previous comments about participating in a "bounty" system, saying that he paid teammates to protect him rather than injure opposing players.

Hall of Fame experiment: In this trial, Cris Carter gets the nod (03/2012): After partaking in this year's Pro Football Hall of Fame voting, Dan Wiederer offers his opinion on what's right and what's wrong with the process.

Column: Randy Moss and Cris Carter go their own way (02/2012): MINNEAPOLIS - Their recent spat highlighted their obstinate natures but should not obscure a delicious possibility for two of the greatest and most fascinating athletes ever to pay taxes in Minnesota:

Cris Carter 'came all the way to Detroit' to tell Calvin Johnson he's 'definitel (10/2011): As expected, Carter ate his words officially on ESPN's Monday Night Countdown, telling Johnson, during a face-to-face interview, that he is "definitely one of the best wide receivers in the National Football League."

ESPN analyst Cris Carter uses faulty logic in analyzing Detroit Lions receiver C (08/2011): The ex-NFL receiving great tries to compare Johnson's four-year career with Randy Moss' as well as his own. But upon further review, his ruling that Johnson isn't among the top six NFL wideouts must be overturned.

PFT: Cris Carter says Moss is 'full of regret' (12/2010): In the weeks since Randy Moss was traded out of New England, the Patriots have become the best team in the league while Moss has become irrelevant. Moss's old teammate and mentor says Moss now wishes he could go back.