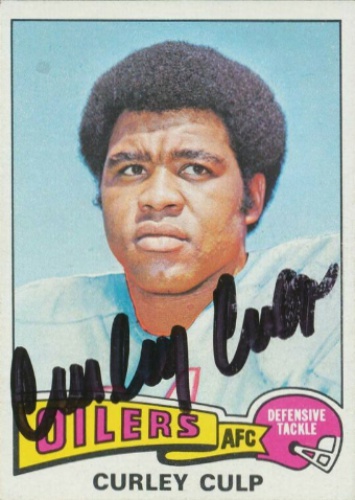 Curley Culp (March 10, 1946 – November 27, 2021) was an American football defensive lineman. He played college football at Arizona State University, where he was also an NCAA heavyweight wrestling champion. He played football professionally in the American Football League (AFL) for the Kansas City Chiefs in 1968 and 1969, and in the National Football League (NFL) for the Chiefs, Houston Oilers, and Detroit Lions. He was an AFL All-Star in 1969 and a six-time AFC–NFC Pro Bowler. More about Curley Culp

Current items with a signature of Curley Culp

These are the most current items with a signature of Curley Culp that were listed on eBay and on other online stores - click here for more items.

Traded items with a signature of Curley Culp

The most expensive item with a signature of Curley Culp (Curley Culp Signed/Autographed Speed Authentic Helmet w/HOF PSA Houston Oilers) was sold in July 2022 for $324.99 while the cheapest item (1974 TOPPS CURLEY CULP CHIEFS HAND SIGNED AUTO FOOTBALL CARD #433) found a new owner for $0.98 in February 2012. The month with the most items sold (48) was November 2021 with an average selling price of $17.75 for an autographed item of Curley Culp. Sold items reached their highest average selling price in October 2013 with $149.50 and the month that saw the lowest prices with $0.99 was January 2010. In average, an autographed item from Curley Culp is worth $15.00.

Most recently, these items with a signature of Curley Culp were sold on eBay - click here for more items.

2022 Pac-12 Hall of Honor Inductee: Curley Culp (03/09/22): A prolific football player and wrestler, Curley Culp was an All-American on the gridiron for the Sun Devils as well as the 1967 NCAA heavyweight wrestling champion, Arizona State’s first-ever wrestling national champion. Widely regarded as one of the best nose tackles to ever play the game, Culp thr

Curley Culp, Defensive Anchor of Two Football Teams, Dies at 75 (12/02/21): A bruising Hall of Famer, Culp helped lead the Kansas City Chiefs to an upset victory in Super Bowl IV. With the Houston Oilers, he revolutionized the role of nose tackle.

Chiefs, Oilers tackle and NFL Hall of Famer Curley Culp dead at 75 (11/27/21): Curley Culp is regarded as one of the best nose tackles in NFL history.

Having helped Chiefs win only Super Bowl, Curley Culp finally joins teammates in (07/2013): KANSAS CITY, Mo. - When he hears the name Curley Culp, the first thing that Chiefs defensive backs coach Emmitt Thomas does is smile. Then he shakes and head and says, "He was an ornery feller."