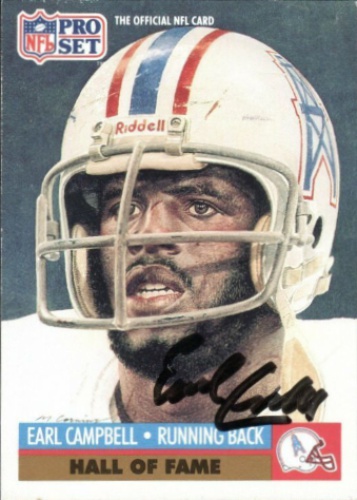 Earl Christian Campbell (born March 29, 1955), nicknamed "the Tyler Rose", is a former American professional football player who played as a running back in the National Football League (NFL) for the Houston Oilers and New Orleans Saints. Known for his aggressive, punishing running style and ability to break tackles, Campbell gained recognition as one of the best power running backs in NFL history. More about Earl Campbell

Current items with a signature of Earl Campbell

These are the most current items with a signature of Earl Campbell that were listed on eBay and on other online stores - click here for more items.

Traded items with a signature of Earl Campbell

If you're interested in Earl Campbell Rookie cards you might want to take a look at our sister site that specializes in Football Rookie Cards only.

The most expensive item with a signature of Earl Campbell (1999 PASSING THE TORCH PTT AUTO AUTOGRAPH EARL CAMPBELL 9.5 NONE higher POP 1) was sold in November 2021 for $799.00 while the cheapest item (EARL CAMPBELL AUTOGRAPHED 2004 GREATS OF THE GAME CARD) found a new owner for $0.01 in November 2008. The month with the most items sold (73) was April 2016 with an average selling price of $33.00 for an autographed item of Earl Campbell. Sold items reached their highest average selling price in September 2017 with $77.44 and the month that saw the lowest prices with $5.99 was April 2009. In average, an autographed item from Earl Campbell is worth $40.00.

Most recently, these items with a signature of Earl Campbell were sold on eBay - click here for more items.

Bo Jackson biographer on how to describe the multi-sport star: 'Lovechild of Ear (12/09/22): Jackson's skill set was insanely unique, and so is his story

Titans' Derrick Henry breaks Hall of Fame running back Earl Campbell's longtime (11/07/22): Henry continues to carve out his niche as the best running back of his era

College football is back: Herbstreit's emotional appeal and more Week 1 greatnes (09/05/20): It might look and feel different, but we should have about 12 hours of college football on Saturday. And even before kickoff, the week has included an Earl Campbell-Guy Fieri meeting, Nick Saban on Oatmeal Creme Pie cereal and more.

UT to rename field after RBs Campbell, Williams (07/2020): Texas responded to football players' request or changes with a sweeping plan to "redefine campus symbolism," including renaming the football field after Earl Campbell and Ricky Williams.

Texans, once 0-3, could sneak past Pats, Chiefs to top AFC (12/2018): Here's a crazy thought: The Houston Texans with home-field advantage throughout the AFC playoffs. Yep, the team that began the season 0-3 just might sneak past the Chiefs and Patriots and claim that coveted spot. The Texans have won nine in a row. They've done so in all sorts of ways, from strong de

Former Heisman winner, Oiler Earl Campbell coming to Conroe (10/2014): He’s known as one of the best to ever carry a football, and a hometown favorite throughout the Houston area.

Earl Campbell reflects on #34, Houston teams (04/2014): Hall of Fame running back Earl Campbell was in town last week and sat down with KHOU 11 Sports reporter Matt Musil to discuss why he started wearing #34 and what he thinks about the current group of Houston pro sports teams.

Earl Campbell: "Give Charlie Strong a chance" (01/2014): Earl Campbell is all in on Texas head football coach Charlie Strong. "His record speaks for itself", was among some of the praise the Heisman winner from Tyler heaped on the newest leader of the Longhorns. 0 0 read more

Earl Campbell says the Astrodome needs to stay (07/2013): As Babe Ruth is to baseball in New York, as Michael Jordan is to basketball in Chicago, Earl Campbell is to football in Houston.

Earl Campbell doesn't think NFL helmet rule will last (03/2013): Hall of Fame running back Earl Campbell 's most famous play used the crown of his helmet. That play would draw a penalty under new NFL rules. Campbell is not amused.

New treatment helping Earl Campbell with pain (01/2013): A new state-of-the-art treatment for chronic pain is offering hope to a former Houston Oiler great, and to people living with macular disorders who dream of a better life.

Football legend Earl Campbell to speak at local fundraiser (10/2012): Football Hall of Famer Earl Campbell, the legendary running back for the Houston Oilers from 1978 to 1984, will share his story of recovery during the Waggoners Foundation Speaker Series Fall Luncheon

Earl Campbell, son support those affected by MS (09/2012): Former Longhorn and NFL Hall of Famer Earl Campbell and his son Tyler are supporting families affected by multiple sclerosis by sending students to college.

Earl Campbell says he has nothing to complain about (07/2012): Hall of Fame running back Earl Campbell is often mentioned as one of the primary examples of how the game of football can take such a physical toll on the men who play it that the sport simply isn’t worth the risks. Campbell, however, does not see it that way. Campbell is on the cover…