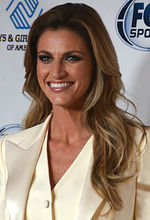 Erin Jill Andrews (born May 4, 1978) is an American sportscaster, television personality, and actress. She rose to prominence as a correspondent on the American cable sports channel ESPN after joining the network in 2004. She later joined Fox Sports in 2012 and has since become the lead sideline reporter for the network's NFL broadcasting team. In 2010, she also gained further recognition from placing third on the tenth season of ABC's Dancing with the Stars and eventually co-hosted the show from 2014 to 2019 with Tom Bergeron. More about Erin Andrews

Current items with a signature of Erin Andrews

These are the most current items with a signature of Erin Andrews that were listed on eBay and on other online stores - click here for more items.

Traded items with a signature of Erin Andrews

Most recently, these items with a signature of Erin Andrews were sold on eBay - click here for more items.

Erin Andrews Reveals How Cervical Cancer Battle Actually Strengthened Her Relati (02/15/19): The sportscaster opens up to ET about her battle and journey with cervical cancer.

Erin Andrews opens up about cervical cancer battle (02/15/19): At almost two-and-a-half-years later and cancer free, the sportscaster is opening up about her highs and lows,

Erin Andrews: Is She Engaged to Jarrett Stoll? (03/2015): Erin Andrews and L.A. Kings player Jarrett Stoll have been dating for a while now, and on Tuesday a rumor circulated that the two might have gotten engaged. It was due to an Instagram shot the Fox sports broadcaster posted …

Flashback Friday: 50 Cent's attempt to kiss Erin Andrews (02/2015): This weekend marks the 2-year anniversary of the infamous attempt by rapper Curtis '50 Cent' to kiss FOX reporter Erin Andrews while standing out on the grid prior to the start of the 2013 Daytona 500.

Leah Remini Takes Over Erin Andrews’ Job (10/2014): Leah Remini may not have made it all the way to the end during her time on Dancing With The Stars, but she doesn’t seem to have any hard feelings about it. The former King Of Queens star returned to …

Tommy Chong Asked Erin Andrews, "Want to touch my boob?" (09/2014): All the Dancing With the Stars news fit to print.

Erin Andrews Opens Up About Social Media Haters (08/2014): Plus: The Dancing with the Stars host talks football and, uh, rap music during Chatter

Doug Robinson: Erin Andrews switches teams and I don't care (07/2014): Why all the fuss about sideline reporters, the most overrated, overhyped, superfluous job in sports?

LA Kings have Erin Andrews’ boyfriend, ex-landscaper and ‘Mr. Game 7′ (06/2014): The Kings lead the Rangers in the Stanley Cup finals after a thrilling overtime victory in Game 1, and you’ve probably read your share of stories about Jonathan Quick and...

Erin Andrews Asks Where Panthers Have To Get Better; Cam: "Charlotte" (12/2013): Panthers quarterback Cam Newton spoke with Erin Andrews after a tight win over the Falcons for the NFC South title. There was a funny failure to communicate at one point, a few seconds after the minute mark in the video. Read more...

Viral Video: Erin Andrews photobombed (09/2013): FOX Sports reporter Erin Andrews has a very interesting photobomber. It was the 6th most viewed YouTube video in the...

Henderson, Erin Andrews tussle on Twitter (07/2013): The victim in Wednesday's fatal fire on Gun Lake was hearing impaired and had ... Two people have been arrested for stealing metal off of the covered bridge that ...

Erin Andrews prepared for quickstep in Monday's 'Dancing with the Stars' (06/2013): ESPN broadcaster, Erin Andrews, has spent all weekend rehearsing her quick step with dancing partner, Marskim Chmerkovskiy. Andrews, who is doing super well in the show so far, is one of six remaining contestants and is in with a very good shot at winning the whole competition.

Erin Andrews is an emotional hockey fan (05/2013): As you know, sportscaster extraordinare Erin Andrews is dating Los Angeles Kings forward Jarret Stoll . The winger has been out of action since May 14 after suffering a concussion, but Andrews has remained a mainstay at Kings games.

Mike Rice's Rutgers Basketball Scandal: Erin Andrews, Donald Faison, Larry King (04/2013): Mike Rice is in the headlines for all the wrong reasons. The Rutgers basketball coach was fired Wednesday, less than 24 hours after ESPN's Outside the Lines broadcast footage of him...

Erin Andrews -- Doused in Lady HATERADE (11/2012): Seeing FOX Sports' Erin Andrews get snubbed by autograph seekers would make anyone feel for her -- unless you're one of the TMZ mean girls ... who, instead chose to dance a jig.  Check out TMZ on TV -- click here to see your local listings!

Erin Andrews: Interviewer in Detroit Tells Fox’s Dugout Reporter, “I think every (10/2012): Some kind of 'interview.'

Erin Andrews' Week 5 thoughts (09/2012): Will QB David Ash and Texas leave Stillwater with a victory on FOX? Erin Andrews is the host of the FOX College Football Pregame show.

Erin Andrews is ready to exit sidelines for studio (08/2012): Veteran reporter has left ESPN for Fox and will host a Saturday night college football show. Erin Andrews has had a regular spot in prime time before.

Erin Andrews audition: 'There was chemistry' (07/2012): One West Michigan resident is turning back the clock 44 years, remembering the ... Muskegon Heights city officials are trying to put new life into a former motel, ...