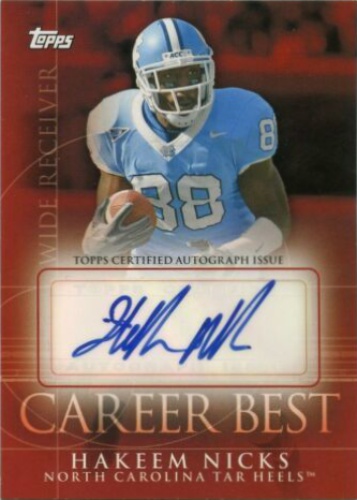 Hakeem Amir Nicks (born January 14, 1988) is an American football wide receiver who is a free agent. He played college football at North Carolina, and was drafted by the New York Giants in the first round of the 2009 NFL Draft. Nicks has also played for the Indianapolis Colts. More about Hakeem Nicks

The most expensive item with a signature of Hakeem Nicks (New York NY Giants team signed football Hakeem Nicks) was sold on eBay in November 2010 for $350.00 while the cheapest item (Hakeem Nicks Signed 11x14 Colts Photo AUTO Autograph PSA/DNA COA) found a new owner for $0.99 in December 2016. The month with the most items sold (52) was February 2012 with an average selling price of $60.03 for an autographed item of Hakeem Nicks. Sold items reached their highest average selling price in June 2011 with $162.43 and the month that saw the lowest prices with $1.99 was June 2016. In average, an autographed item from Hakeem Nicks is worth $35.00.

Current items with a signature of Hakeem Nicks

These are the most current items with a signature of Hakeem Nicks that were listed on eBay and on other online stores - click here for more items.

Traded items with a signature of Hakeem Nicks

Most recently, these items with a signature of Hakeem Nicks were sold on eBay - click here for more items.

Hakeem Nicks: 'I'm nowhere near finished' (04/09/15): Former Colt Hakeem Nicks sits at the crossroads of his NFL career. However, the receiver said he's got a "burning sensation" to prove he can still play. Where will Nicks land next?

Report: 49ers to meet with WR Hakeem Nicks (03/30/15): The 49ers plan to meet with wide receiver Hakeem Nicks, according to an ESPN report. Nicks told ESPN's Josina Anderson that he was traveling to California on Monday to meet with the 49ers.

Vacchiano: Hakeem Nicks catches a new role with the Colts (01/2015): It’s still hard to believe, even a year later, how wrong everything seemed to go for Hakeem Nicks in his final years with the Giants.

Are playoffs redemption time for Hakeem Nicks? (12/2014): Nicks had 405 receiving yards in regular season, 444 in 2011 postseason with the New York Giants

For former Giants Ahmad Bradshaw and Hakeem Nicks, 'it's was all love' in return (11/2014): Both players say no animosity toward old team

Playing against Giants 'definitely' has extra meaning for Hakeem Nicks, Ahmad Br (10/2014): Congratulations! Your weather is set to . You can change the location at any time. Don't have an account?

Hakeem Nicks flashes potential for Colts' WR group (08/2014): Hakeem Nicks was so fired up to play his former team he earned a taunting penalty. The Indianapolis Colts receiver emphasized the lethality of the Colts' passing game.

Giants to face Hakeem Nicks’ Colts in preseason (04/2014): The Giants will get an early look at the one-time star receiver they allowed to walk out the door when they face Hakeem Nicks and the Colts at Lucas Oil...

Giants GM: Hakeem Nicks, Tuck deserve to hit market (02/2014): New York Giants general manager Jerry Reese said Saturday that Justin Tuck and Hakeem Nicks deserve to see what their value is in free agency. Will either of the veterans be back for Big Blue?

Giants' Hakeem Nicks: I'm still one of the best wide receivers in the league (12/2013): Hakeem Nicks still thinks highly of his abilities even after a down season.

Hakeem Nicks thought he was healthy enough to play vs. Cowboys (11/2013): Nicks says he has no regrets about how the situation went down last Sunday

David Diehl doesn't see Hakeem Nicks coming back to Giants in 2014 (10/2013): Both are free agents this offseason

Hakeem Nicks to the Detroit Lions? Doesn't sound like it right now (09/2013): PFT doesn't discount the possibility of Nicks or Leshoure being moved, just not for each other right now. While it 'would make sense' for the Lions, writer Mike Florio doesn't see the Giants willing to cash in the season so early, even after an 0-3 start.

Victor Cruz, Hakeem Nicks and Justin Tuck make ESPN.com's 'NFLRank' list; agree (08/2013): Tell us if you agree with the way experts ranked three Giants who were on the list of the 200 best NFL players.

Giants' Hakeem Nicks gives back to youth, works out with Eli Manning (06/2013): Wide receiver said he and quarterback Eli Manning have worked out together since the end of minicamp

Hakeem Nicks and Giants' Lament (01/2013): The Giants' quarterback, general manager and coach pointed to the impact of receiver Hakeem Nicks's injuries in a disappointing 2012 season.

Giants' Hakeem Nicks doesn't regret playing through knee injury (12/2012): Nicks admits he was never close to 100 percent, but wanted to play for his team and himself

Giants' Hakeem Nicks still out of step following knee and foot injuries (11/2012): Has played the slot position more in an effort to break free

Hakeem Nicks Is Back As Giants Top Patriots (08/2012): Most NFL teams use the final game of the preseason to get one last, long look at their backups, but with Hakeem Nicks returning to action for the New York Giants, Tom Coughlin sent out his...

Giants notebook: Hakeem Nicks eager to practice, must wait till mid-August (07/2012): Wide receiver Hakeem Nicks, in headband, is frustrated that he won't be able to practice with his Giants teammates until mid-August. The big-play pass catcher broke his foot in May. / Kathy Willens/AP

Giants Wide Receiver Hakeem Nicks: ‘I’m Definitely Making Training Camp’ (06/2012): Hakeem Nicks broke a bone in his right foot at the team's OTAs on May 24th, and it was reported at the time that he would be on the shelf for approximately 12 weeks. But the 2009 first-round pick of Big Blue has different ideas.

Giants' Hakeem Nicks has no doubt he'll be ready for season opener (05/2012): Nicks to go by 12-week timetable, be cautious of setbacks

NFL Draft 2012: Giants compare Rueben Randle's style to Hakeem Nicks' (04/2012): Plus, why the Giants are reluctant to trade up

N.Y. Giants WR Hakeem Nicks shares Super Bowl moment with his high school coach (02/2012): Before New York Giants wide receiver Hakeem Nicks was a Super Bowl champion, he was a North Carolina Tar Heel. Before he was a Tar Heel, he played for coach Tom Knotts at Independence High School.

Giants' Hakeem Nicks sits out of practice, hoping to play against Cowboys (12/2011): Nicks has been hampered by a hamstring injury

Hakeem Nicks endures (10/2011): His time would come, his father always told him.