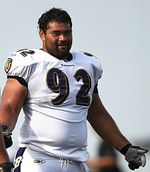 Etuini Haloti Ngata (born January 21, 1984) is a former American football defensive tackle. He played college football for the University of Oregon and earned consensus All-American honors. Ngata was drafted by the Baltimore Ravens in the first round of the 2006 NFL Draft, and was selected for the Pro Bowl five times. Ngata played for the Ravens for nine seasons before being traded to the Detroit Lions before the 2015 NFL season. Ngata was also a member of the Philadelphia Eagles for one season in 2018 before retiring. More about Haloti Ngata

The most expensive item with a signature of Haloti Ngata (Haloti Ngata Autographed Signed Ravens 2010 GAME ISSUE JERSEY NFL PSA DNA) was sold on eBay in February 2018 for $595.00 while the cheapest item (2006 PRESS PASS AUTHENTICS HALOTI NGATA SIGNATURE) found a new owner for $0.95 in March 2008. The month with the most items sold (22) was December 2010 with an average selling price of $32.72 for an autographed item of Haloti Ngata. Sold items reached their highest average selling price in August 2019 with $525.00 and the month that saw the lowest prices with $0.99 was July 2008. In average, an autographed item from Haloti Ngata is worth $34.92.

Current items with a signature of Haloti Ngata

These are the most current items with a signature of Haloti Ngata that were listed on eBay and on other online stores - click here for more items.

Traded items with a signature of Haloti Ngata

Most recently, these items with a signature of Haloti Ngata were sold on eBay - click here for more items.

Steve Bisciotti's comments about Haloti Ngata could have violated NFL tampering (04/01/15): Tampering has been a popular topic in NFL circles in recent days, with the New England Patriots and New York Jets exchanging accusations over cornerback Darrelle Revis and several other teams reportedly under investigation for agreeing to deals with free agents before the market opened.

John Harbaugh: Detroit Lions DT Haloti Ngata still has plenty left (03/13/15): The Baltimore Ravens dealt Haloti Ngata, their aging star defensive lineman, to the Detroit Lions. But it had little to do with his performance, past or future.

Detroit Lions' Haloti Ngata out to prove he can play without PEDs (03/13/15): The defensive tackle was popped with a four-game suspension to conclude last season due to violation of the league's substance-abuse policy. He later admitted to taking Adderall, which is banned.

John Harbaugh: Detroit Lions DT Haloti Ngata still has plenty left (03/2015): The Baltimore Ravens dealt Haloti Ngata, their aging star defensive lineman, to the Detroit Lions. But it had little to do with his performance, past or future.

Harbaugh hopes to keep Torrey Smith, Justin Forsett, Haloti Ngata on Ravens rost (01/2015): Coming off a season he was not happy with, wide receiver Torrey Smith doesn’t know if he’ll be with the Ravens next season.

Haloti Ngata -- Tongan War Dancer [Video] (11/2014): Baltimore Ravens star Haloti Ngata scared the hell out of a room full of people last night when he busted out an authentic Tongan warrior dance on stage ... and TMZ Sports has the footage. It's called the Kailao ... a traditional dance from Tonga…

Haloti Ngata Displaying Versatility With Ravens (10/2014): There is seemingly no limit to Haloti Ngata's versatility with the Baltimore Ravens.

Ravens' Ozzie Newsome wants to extend Haloti Ngata (06/2014): Ozzie Newsome is confident that his team will get back to its winning ways. The Ravens GM spoke Friday about taking care of some key players in Baltimore.

Haloti Ngata rejected 'long-term' deal from Ravens (04/2014): Haloti Ngata was offered a "lucrative, long-term" contract extension by the Baltimore Ravens, but he did not sign it, Albert Breer reported Tuesday. Why would the defensive tackle eschew such job security?

Ray Rice replaced by Haloti Ngata at March for Animals event on Friday (02/2014): Ravens nose tackle Haloti Ngata will replace running back Ray Rice at the Maryland Society for the Prevention of Cruelty to Animals' kickoff party on Friday night for its annual March of Animals event.

Cowboys' Jason Hatcher replaces Haloti Ngata in Pro Bowl (01/2014): Ravens defensive lineman dealt with sprained knee during the season Ravens nose tackle Haloti Ngata will not play in the Pro Bowl because his wife is expecting their third child on Tuesday, the Ravens announced.

Haloti Ngata making progress after knee injury (07/2013): At the mandatory minicamp last month, Ravens Pro Bowl defensive tackle Haloti Ngata still looked to be favoring the knee he hurt in the Super Bowl, forcing him out of the game in the third quarter. However, that hasn’t been evident this week as Ngata has been moving around freely.

#DNHuddleUp: Who will have the biggest Super Bowl impact? Paul Kruger, Dennis Pi (01/2013): There are seven players in Super Bowl XLVII with ties to Utah, and five of them will play for the Ravens. For the purposes of...

Ravens DT Haloti Ngata is eager to return to the practice field (08/2012): Defensive tackle Haloti Ngata was out on the field Saturday night as the Ravens held an open practice for fans at M&T Bank Stadium, but he was in a jersey and shorts and didn’t participate in team drills. That will happen for the first time this summer on Monday, and Ngata can’t wait.

Haloti Ngata reportedly on PUP list with hurt ankle (07/2012): Baltimore Ravens defensive tackle Haloti Ngata has been placed on the active physically unable to perform list, according to a report.

Ravens Insider: Haloti Ngata voted the NFL's ninth-best player (06/2012): Haloti Ngata has squashed ball-carriers and bowled over quarterbacks throughout his Ravens career, and on Wednesday night, it was unveiled by NFL Network that his peers consider him one of the game’s best players.

Baltimore Ravens give former Highland High's Haloti Ngata a new 5-year, $61 mill (09/2011): Nearing a deadline to accomplish one of their stated priorities, the Baltimore Ravens reached agreement Tuesday on a...

Ravens Insider: Could deal with Haloti Ngata get done soon? (08/2011): The Ravens and defensive tackle Haloti Ngata are negotiating a long-term contract extension, but neither side is commenting on the status of the talks.

Utah Utes football: Haloti Ngata says the Utes will do well in the Pac-12 (04/2011): Baltimore Ravens defensive tackle Haloti Ngata knows what the Utah Utes are getting into. The former Highland High School...

Ravens' Haloti Ngata 'an absolute monster' (01/2011): CLEVELAND -- As the Baltimore Ravens prepare for the NFL playoffs, Haloti Ngata will once again remember how his NFL prayers were answered by a hang-up. read more