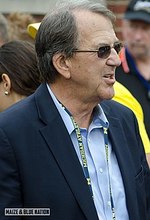 Lloyd Henry Carr Jr. (born July 30, 1945) is a former American football player and coach. He served as the head football coach at the University of Michigan from 1995 through the 2007 season. Under Carr, the Michigan Wolverines compiled a record of 122–40 and won or shared five Big Ten Conference titles (1997, 1998, 2000, 2003, and 2004). Carr's 1997 team was declared the national champion by the Associated Press. His record coaching against top ten-ranked opponents was 20–8. Carr was inducted into the College Football Hall of Fame as a coach in 2011. More about Lloyd Carr

Current items with a signature of Lloyd Carr

These are the most current items with a signature of Lloyd Carr that were listed on eBay and on other online stores - click here for more items.

Traded items with a signature of Lloyd Carr

The most expensive item with a signature of Lloyd Carr (Bo Schembechler/Lloyd Carr Autographed Michigan Wolverines Football Helmet) was sold in May 2021 for $2997.00 while the cheapest item (Lloyd Carr Autographed Index Card) found a new owner for $0.01 in August 2016. The month with the most items sold (6) was March 2008 with an average selling price of $18.24 for an autographed item of Lloyd Carr. Sold items reached their highest average selling price in May 2021 with $2997.00 and the month that saw the lowest prices with $0.99 was June 2010. In average, an autographed item from Lloyd Carr is worth $49.48.

Most recently, these items with a signature of Lloyd Carr were sold on eBay - click here for more items.

Michigan football to 'widen access' to Lloyd Carr Tunnel at Michigan Stadium aft (01/23/23): A Michigan spokesman told the Free Press the decision was made as "a direct result of a thorough safety review that occurred following the season."

Former head coach Lloyd Carr on Michigan: 'A team for the ages' (12/02/22): Former Michigan head coach Lloyd Carr might be a bit biased but his feelings for the current U-M program are extremely high. Appearing on the Good Afternoon, Michigan Football podcast on Friday, Carr was asked about his feelings about the current team. "The part that impressed me is the way, game

Lloyd Carr comes away impressed by interim AD Jim Hackett after Michigan coachin (01/2015): Carr was asked earlier this week whether or not Hackett should become Michigan's permanent athletic director.

Football in Chaos - Former Michigan football coach Lloyd Carr once said, "There (11/2014): This year, the Wolverines seem to have found most of them. They opened the season at 3-4, losing to average competition (Minnesota, Utah, Rutgers), and beating only one top-100 team (dismal Penn State). Against Minnesota, the coaches made the curious decision to start backup quarterback Shane...

Lloyd Carr happy to see Teryl Austin hired as new Detroit Lions defensive coordi (01/2014): When the Baltimore Ravens played the Detroit Lions on Monday Night Football last month, Teryl Austin texted his old boss at Michigan, Lloyd Carr, and asked whether he had time to get together for lunch.

Lloyd Carr, former U-M players back Brady Hoke on 'chickening out' comment (05/2013): Brady Hoke's recent "chickening out" comment regarding Notre Dame and its exit from the series with Michigan after the next two games definitely has support among former Wolverines.

Ex-Michigan coach Lloyd Carr named to NCAA infractions committee (01/2013): Carr has been appointed to the NCAA Committee on Infractions. Individuals on the board serve three-year terms. Carr, head coach of the Wolverines for 13 seasons, retired after the 2007 season.