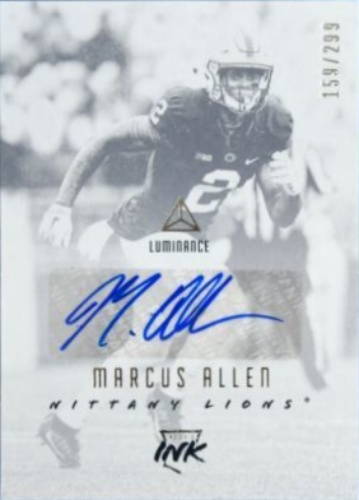 Marcus LeMarr Allen (born March 26, 1960) is a former American football running back, analyst and actor who played in the National Football League (NFL) for 16 seasons, primarily with the Los Angeles Raiders. Considered one of the greatest goal line and short-yard runners in NFL history, he was selected 10th overall by the Raiders in the 1982 NFL Draft, following a successful college football career at USC. He was a member of the Raiders for 11 seasons and spent his last five seasons with the Kansas City Chiefs. More about Marcus Allen

Current items with a signature of Marcus Allen

These are the most current items with a signature of Marcus Allen that were listed on eBay and on other online stores - click here for more items.

Traded items with a signature of Marcus Allen

If you're interested in Marcus Allen Rookie cards you might want to take a look at our sister site that specializes in Football Rookie Cards only.

The most expensive item with a signature of Marcus Allen (Biletnikoff Plunkett Marcus Allen Signed Authentic FULL Super Bowl Tickets PSA) was sold in June 2021 for $2999.99 while the cheapest item ('90 PRO-SET MARCUS ALLEN SIGNED AUTOGRAPH RAIDERS HOT) found a new owner for $0.01 in May 2009. The month with the most items sold (38) was August 2022 with an average selling price of $47.50 for an autographed item of Marcus Allen. Sold items reached their highest average selling price in October 2018 with $179.50 and the month that saw the lowest prices with $5.74 was May 2010. In average, an autographed item from Marcus Allen is worth $41.00.

Most recently, these items with a signature of Marcus Allen were sold on eBay - click here for more items.

Steelers’ Marcus Allen out for last two games after biceps surgery (12/27/22): The Steelers won’t have one of their key special teams contributors for the rest of the season. Head coach Mike Tomlin said during his Tuesday press conference that safety Marcus Allen is out for the last two games after undergoing biceps surgery. Allen, a fifth-round pick in the 2018 draft, had pla

Jacobs joins mentor Allen in Raiders record book (10/2022): On a day Raiders RB Josh Jacobs added his name to the franchise record book, it was only fitting that his mentor, Hall of Famer Marcus Allen, was on hand to witness.

Marcus Allen re-signs with Steelers (04/2022): The Steelers tendered linebacker Marcus Allen as a restricted free agent early this offseason and he is returning to the team after failing to sign an offer sheet from another club. The team announced that Allen officially re-signed on Tuesday. He will make $2.54 million under the terms of the tag A

Former NFL fullback Steve Smith, 57, dies of ALS (11/2021): Steve Smith, who was the lead blocker for stars like Marcus Allen and Bo Jackson during his nine-year NFL career with the Raiders and Seahawks, has died of ALS at age 57.

Frank Gore has opportunity with Jets to surpass Marcus Allen's historic age-37 s (05/2020): Only one running back has ever played a significant role at age 37

Why Josh Jacobs should join Marcus Allen as Raiders offensive ROYs (02/2020): Josh Jacobs assumed the workhorse role for the Raiders right away, keeping them in the playoff hunt until the end.

Allen, father fuel Jaguars' Fournette for Titans (11/2019): Upset over his workload, Jaguars running back Leonard Fournette has a new mindset heading into Week 12 after phone calls with both his father and Hall of Famer Marcus Allen.

Darnold leads Jets to 27-23 win over Allen, Bills (12/2018): Sam Darnold had difficulty containing his excitement after the New York Jets rookie enjoyed his first fourth-quarter comeback victory in the NFL. On the other side of the tunnel, Buffalo rookie Josh Allen had difficulty keeping his frustrations in check after his three turnovers contributed to cost

Rising Star: Stanford Guard Marcus Allen (02/2015): Marcus Allen says he learned some “tricks” training with renowned hoops instructor John Lucas in Houston this past summer, but there’s nothing gimmicky about his transformation this season.

Marcus Allen: It's a perfect time for Raiders, NFL to return to Los Angeles (11/2014): The Raiders great says the Silver and Black should be one of the teams to revive the NFL in L.A.

Marcus Allen: Oakland Raiders Moving To Los Angeles Is ‘Viable Option’ (07/2014): The NFL reportedly is looking to place a team in Los Angeles, and one former...

Howie Long, Marcus Allen headline list of Top 10 Oakland Raiders of All Time (06/2014): Oakland Raiders fans may remember a few of the names contained in this list, and others may be a surprise.

Boomer & Carton: Yet Another Great NFL Guest In Marcus Allen (01/2014): Allen, Boomer and Craig got into a discussion on NFL free agency and how Allen, along with the union members, fought years ago for free agency in football and how the current players are reaping the benefits now.

Boomer & Carton: Marcus Allen Knows A Thing Or Two About Alternating Currents (12/2013): Right Click Here To Download Marcus Allen is a member of both the Pro Football and College Football Halls of Fame and he called in this morning to chat with Boomer and Craig about the […]

An Interview with Marcus Allen (06/2013): I had no idea. I was looking for a solid football and academic school. Was there a moment, or something that happened, that made you realize you wanted to come to Penn State? Or was it just a decision that you gradually came to a realization about?

NFL Legends Mike Haynes, Roy Green, Dermontti Dawson And Marcus Allen Embark On (05/2013): David Gergen, President of Pro Player Health Alliance, lets everyone know there is no charge to attend the next public awareness event with NFL greats in La Jolla, CA. (PRWeb May 20, 2013) Read the full story at http://www.prweb.com/releases/2013/5/prweb10749249.htm

B&C Morning Show: Marcus Allen Checks In (12/2012): Marcus Allen woke up early on the West Coast this morning to call in and chat with Boomer & Craig. When they got him on the horn, the guys asked Allen for his take on the Jets after their 14-10 loss to the Titans last night in Tennessee.

Marcus Allen, Oakland Raiders leave past behind (09/2012): Marcus Allen was welcomed back into the Raiders family on Sunday, lighting the eternal flame for the late Al Davis before a win over the Steelers. But what was behind the famous feud?