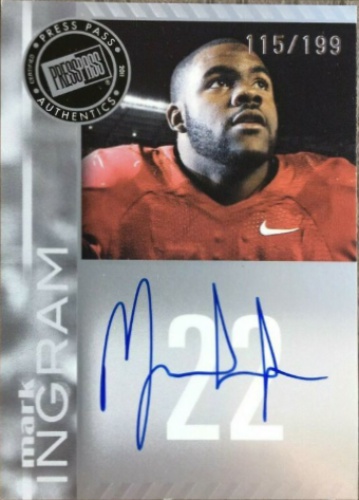 Mark Valentino Ingram II (born December 21, 1989) is an American football running back for the New Orleans Saints of the National Football League (NFL). He played college football for the Alabama Crimson Tide, where he was the first Alabama player to win the Heisman Trophy after rushing for 1,658 yards in 2009 en route to winning the 2010 BCS National Championship. More about Mark Ingram

Current items with a signature of Mark Ingram

These are the most current items with a signature of Mark Ingram that were listed on eBay and on other online stores - click here for more items.

Traded items with a signature of Mark Ingram

If you're interested in Mark Ingram Rookie cards you might want to take a look at our sister site that specializes in Football Rookie Cards only.

The most expensive item with a signature of Mark Ingram (2009 Alabama Team Signed F/S Helmet GAI Mark Ingram +) was sold in January 2010 for $1200.00 while the cheapest item (Mark Ingram Autographed New Orleans Saints Card) found a new owner for $0.50 in October 2013. The month with the most items sold (271) was January 2010 with an average selling price of $74.00 for an autographed item of Mark Ingram. Sold items reached their highest average selling price in December 2009 with $122.50 and the month that saw the lowest prices with $3.99 was May 2009. In average, an autographed item from Mark Ingram is worth $39.95.

Most recently, these items with a signature of Mark Ingram were sold on eBay - click here for more items.

Saints' Mark Ingram expected to miss three to four weeks with MCL sprain, per re (10/31/22): Injuries keep taking their toll in New Orleans

Mark Ingram believes the Saints can “make a lot of noise” (06/18/22): It’s a rarity that a head coach leaves but, for the most part, the rest of the team remains the same. That’s exactly what the Saints will be doing in 2022. Sean Payton, who arrived in 2006, is gone. But nearly everyone else is back. One guy who knows a thing or two about the [more]

Watch as Mark Ingram thanks Houston Texans for transparency after trade back to (10/2021): Veteran running back says Texans gave him option of returning to original team after Saints inquiry

Mark Ingram II announces he is switching to No. 2 as he begins tenure with Texan (05/2021): Ingram donned No. 21 with the Ravens last season

David Johnson embracing running back competition on Texans after offseason acqui (03/2021): The Texans added Phillip Lindsay and Mark Ingram to the backfield mix

Ravens' Mark Ingram a healthy scratch for Week 15 matchup with Jaguars (12/2020): It appears Ingram is no longer a part of Baltimore's offensive game plan

Ravens OC Greg Roman says RB rotation will change each week: 'We like to keep pe (09/2020): Both Mark Ingram and J.K. Dobbins should see plenty of work in Baltimore's scheme this year

Ravens' crowded backfield is NFL's most talented, but they love it (07/2020): The Ravens are touting the combination of Mark Ingram, J.K. Dobbins, Gus Edwards and Justice Hill as a "four-headed monster."

Titans-Ravens injuries: Mark Ingram expected to play in divisional round despite (01/2020): Mark Andrews was also listed on the injury report as questionable for the Ravens

Ravens to sit Lamar, other starters vs. Steelers (12/2019): Lamar Jackson and several other Ravens starters, including injured running back Mark Ingram, will not play in Week 17 against the Steelers.

Highlights from Mark Ingram's big game | Week 12 (11/2019): Running back Mark Ingram led the Baltimore Ravens Week 12 rushing attack against the Los Angeles Rams on "Monday Night Football." Here are his highlights, where he gained 111 yards on the ground and caught a touchdown pass. This game is streaming live on the Yahoo Sports mobile app, or on ESPN

Mark Ingram, improved rushing attack could be key for New Orleans Saints (08/2014): Run-game boost could be difference between winning a division or opening the playoffs on the road.

Saints RB Mark Ingram ready to strap on pads, battle for carries (07/2014): No one needs to tell New Orleans Saints running back Mark Ingram it’s a big year for him. He’s fully aware of that fact. He’s knows he’s competing for a job against a stable of talented running backs. He knows he’s fighting for his next contract.

Mark Ingram Q&A: New Orleans Saints running back hopes for expanded role in four (03/2014): Congratulations! Your weather is set to . You can change the location at any time. Don't have an account?

Fantasy Football Waiver Wire, Week 12: Mark Ingram is Worth Playing Against the (11/2013): Last week, I highlighted Bobby Rainey, and of course, if Rainey is still available, you want to add him.

Running Back Mark Ingram continues to excel in good health (08/2013): After three weeks of training camp and two preseason games, running back Mark Ingram is feeling better than ever and eager to prove his worth when he's at full health.

Mark Ingram busts Jonathan Vilma's nose (07/2013): As the Saints ramp up the intensity during training camp practices, a few battle scars are beginning to show.

Ranking the New Orleans Saints' players: No. 21, Mark Ingram (06/2013): Will Ingram finally live up to his potential?

Healthy Mark Ingram is poised to have best season yet with New Orleans Saints (05/2013): Ingram has great opportunity to build off his strong 2012 finish

Saints RB Mark Ingram to Visit Mobile Monday (02/2013): The NFL star will volunteer and sign autographs for winners of a sweepstakes hosted by Winn Dixie.

Latest Michigan bill signings: Arson penalties, conservation corps and an honor (01/2013): LANSING, MI – Some of the latest bills signed into Michigan law are aimed at restructuring and in some cases stiffening penalties for arson and reviving the state’s Civilian Conservation Corps.

Flint native Mark Ingram surpasses 1,000-yard career mark in victory over Dallas (12/2012): FLINT, MI -- It took four quarters and an overtime period Sunday in Dallas for the New Orleans Saints to break free from the Cowboys and return home with a 34-31 victory.

Fantasy Football Waiver Wire, Week 11: Saints Backfield of Mark Ingram and Chris (11/2012): Chris Ivory got the big runs, while Ingram is the first rounder who got the most carries. Both have a great matchup.

Should New Orleans Saints replace Mark Ingram with Chris Ivory? (10/2012): Tailbacks have been popular topic among fan base

Saints RB Mark Ingram doesn’t feel missing practices has put him behind (08/2012): For parts of Mark Ingram’s past three years, injuries have played a significant role in his progress forward.

New Orleans Saints RB Mark Ingram feels he can become an 'every-down back' in th (07/2012): With four practices under his belt, the Flint native feels he can be a key contributor to his team despite his off-season surgeries. This past weekend Ingram and the Saints put on pads for the first time in training camp and the 2009 Heisman trophy winner seems more comfortable this time around.

Mark Ingram promotes healthy living in return to Flint at Men's Health Fest at A (06/2012): FLINT, MI – Providing health care service for the sick and injured folks in mid-Michigan continues to be Hurley Medical Center's main focus but the company also encourages men to stay fit.

New Orleans Saints running back Mark Ingram will host a youth camp (01/2012): The camp will be at Tulane on May 5 and 6

NFL local roundup: Flint's Mark Ingram returns from injury, Saints defeat Falcon (11/2011): Mark Ingram’s return from an injury wasn’t spectacular Sunday, but the New Orleans Saints rookie running back was part of an important win. After being sidelined the previous two games because of a heel injury, Ingram rushed eight times for 11 yards against the Falcons.

Flint's Mark Ingram embarks on NFL career; looking back on other Flint-area NFL (09/2011): FLINT, Michigan — The hype surrounding Flint Southwestern grad Mark Ingram , who is expected to be in the running for 2011 NFL Rookie of the Year honors, is nothing new.

University of Michigan running backs coach Fred Jackson says Thomas Rawls is 've (08/2011): Besides fielding questions about Rawls' potential Sunday at the UM Football Media Day, Jackson answered inquiries about another Flint running back, Mark Ingram, whom Rawls has been compared to.

Thursday links: The first picture of Drew Brees handing off to Mark Ingram (05/2011): Morning news and opinion from around the NFL.

New Orleans Saints hit daily double with Mark Ingram, Cameron Jordan (04/2011): In a matter of half hour, the Saints addressed some issues

2011 NFL Draft: Power Ranking Mark Ingram, Ryan Williams And The Top 10 RB's (01/2011): With the first round of the 2011 NFL playoffs now over, and the BCS National Championship played, we are now one step closer to the a NFL Draft and the birth of a new breed of fascinating athletes.