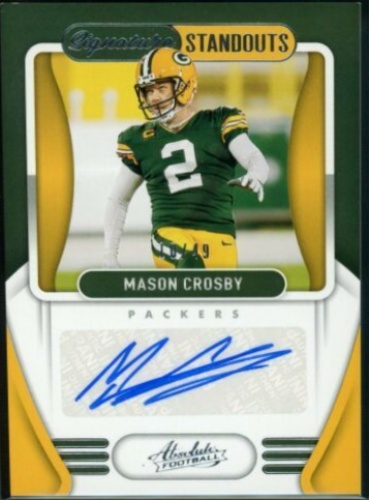 Mason Walker Crosby (born September 3, 1984) is an American football placekicker for the Green Bay Packers of the National Football League (NFL). He played college football for the University of Colorado, and earned unanimous All-American honors. The Packers chose him in the sixth round of the 2007 NFL Draft. He was a member of the Packers' Super Bowl XLV championship team against the Pittsburgh Steelers. More about Mason Crosby

Current items with a signature of Mason Crosby

These are the most current items with a signature of Mason Crosby that were listed on eBay and on other online stores - click here for more items.

Traded items with a signature of Mason Crosby

The most expensive item with a signature of Mason Crosby (PACKERS Mason Crosby signed F/S Speed helmet w/ SB XLV All Time Scorer JSA AUTO) was sold in November 2021 for $269.95 while the cheapest item (Mason Crosby Sketch Card Limited 5/50 Edward Vela Signed) found a new owner for $0.99 in August 2022. The month with the most items sold (40) was January 2008 with an average selling price of $20.85 for an autographed item of Mason Crosby. Sold items reached their highest average selling price in February 2021 with $118.39 and the month that saw the lowest prices with $0.99 was May 2010. In average, an autographed item from Mason Crosby is worth $12.15.

Most recently, these items with a signature of Mason Crosby were sold on eBay - click here for more items.

It’s probably time for Packers to move on from K Mason Crosby (01/17/23): Crosby has declining leg strength, doesn't have a contract for 2023 and turns 39 in September.

Packers had two kickers active. Only Mason Crosby kicked. Here's why. (01/02/23): Packers veteran kicker Mason Crosby wasn't supposed to handle kickoffs in the cold-weather game but was forced into action at the last minute.

Everything going Packers’ way as they lead Vikings 27-3 at halftime (01/01/23): The Vikings have comeback all season. They will need another big one if they are going to win today. The Packers lead 27-3 at halftime. Green Bay, which now needs only to win out to clinch a playoff berth, got two return touchdowns in the first half, along with Mason Crosby field goals of 26 [more]

Packers' Mason Crosby ties Brett Favre's franchise record for most consecutive g (12/20/22): History is being made on 'Monday Night Football'

Packers claim Gabe Brkic, waive Dominik Eberle (06/2022): The Packers made a change at kicker on Monday. According to multiple reports, they have claimed Gabe Brkic off of waivers. They waived Dominik Eberle in a corresponding move and still have Mason Crosby on the roster. Brkic was waived by the Vikings last Friday. They signed him as an undrafted free a

Packers' Rich Bisaccia will hold kicking competition following 2021 struggles by (04/2022): The Packers legend will have to compete to keep his job in 2022

Packers taking “chance to look at a lot of guys” at kicker (02/2022): The Packers’ season ended in the divisional round of the playoffs thanks in large part to a miserable performance by their special teams units that included the 49ers blocking a Mason Crosby field goal attempt. Crosby had a rough season leading into that playoff game. He was 25-of-34 on field goals

Matt LaFleur: Packers will “absolutely not” replace kicker Mason Crosby (11/2021): Packers kicker Mason Crosby is just 2-for-6 on field goals over the last three weeks, but his job is not in jeopardy. That’s the word from Packers coach Matt LaFleur, who said today that his team will “absolutely not” replace Crosby. Crosby made a 54-yard field goal in Sunday’s loss to the Vikings,

Pack, Bengals miss 5 FGs before Crosby wins it (10/2021): The Packers and Bengals combined to miss five potential go-ahead field goals in the fourth quarter or OT before Mason Crosby's game-winner.

Packers sign kicker Mason Crosby through 2022 with $12.9M extension, per reports (02/2020): The 35-year-old veteran was scheduled to hit free agency in March

Packers' Crosby gets game ball after family death (12/2019): Mason Crosby received the game ball Sunday after the Packers' win over the Giants after learning of the death of his brother's wife earlier in the week.

Mason Crosby's fifth FG ties up NFC title game, 22-22 (01/2015): In a frantic final two minutes, it was only fitting that the Packers responded after the Seahawks had somehow taken the lead with two touchdowns in 44 seconds. The Packers drove 48 yards in seven plays in 1:11 and Mason Crosby hit a 48-yard field goal with 14 seconds left in regulation to make it 22

Mason Crosby (11/2014): But a new registration system planned for the 2015 hunt could change the culture of the annual nine-day event.

Digital Dish: Get Packers kicker Mason Crosby on your wall (05/2014): We have a great time on the Clubhouse Live Facebook chatting about the team and giving you a look behind the scenes. And we've got loads of prizes if you check out the Enter to Win tab up top.

Mason Crosby bounces back with a strong season (01/2014): Mason Crosby was in the middle of his best NFL season ever. His kicks were pure. His confidence was high. His doubts were long gone.

Mason Crosby: Recapping Crosby's Week 16 Fantasy Performance (12/2013): Crosby connected on a 22-yard field goal and four extra points Sunday against Pittsburgh. It's the second straight week he's had seven points. Crosby now has an impressive 132 points in his bounce back season. He's missed only four field goals, none of which have come in the last six weeks.

Mason Crosby dials in from long range with 57-yard kick (11/2013): The hush inside MetLife Stadium was the confirmation that Green Bay Packers kicker Mason Crosby’s 57-yard field was good. Crosby knew well before that.

Kicker Mason Crosby has big season lined up (09/2013): This has been a strange summer for Mason Crosby. He responded with a strong finish, retained his job as the Green Bay Packers kicker, and now the regular season is here.

No veteran replacement in sight for Mason Crosby (07/2013): Seven kickers with a better field-goal percentage in 2012 than Mason Crosbywere available to the Green Bay Packers at the start of free agency this spring. But they stuck with Crosby.

Mason Crosby works through 'technical issues' in Packers offseason (05/2013): Loading... Slocum said that Crosby started to improve toward the end of the 2012-13 season, but that doesn't change the fact that Crosby finished with some of the worst stats of any kicker in the league.

Mason Crosby looks to straighten things out (02/2013): Late during Super Bowl week, San Francisco kicker David Akers bemoaned the fact he was asked to answer question after question about his 2012 struggles. Can you imagine if Mason Crosby was in New Orleans?

Mason Crosby reminds students to eat healthy & exercise: Wisconsin Dairy News (01/2013): VALDERS, Wisconsin (WXOW) - The National Football League, National Dairy Council, and the Wisconsin Milk Marketing Board have partnered to remind kids to Fuel Up To Play 60. In this segment of Wisconsin

Mason Crosby's Production in Question (12/2012): In a performance-driven business, when other players lose roster spots and jobs for lack of production, is the coach's confidence in Mason Crosby a tough sell with the rest of the roster?

Green Bay Packers: Mason Crosby gets support from all-time great (11/2012): GREEN BAY, Wis. -- Lost in the wave of support from friends, family and colleagues was a unique incoming call.

Mason Crosby Falls Short on Long Balls (10/2012): Entering the year, Crosby was a 50-percent kicker on field goals of 50 yards or more. But this year he's one for four.

Photos: Packers kicker Mason Crosby signs autographs in Sheboygan, Feb. 18 (02/2012): Following the leader has worked for 100 years for the Girl Scouts of the United States of America. - 3:31 pm

Packers' Mason Crosby on a roll toward record (10/2011): GREEN BAY, Wis. — The game between the undefeated Green Bay Packers and winless St. Louis Rams on Sunday might not come down to the right foot of Packers kicker Mason Crosby.

Super Bowl winner Mason Crosby lends a hand in Georgetown (04/2011): Mason Crosby grew up in Georgetown, Texas and played college football at Colorado. Now, as kicker for the Green Bay Packers, he is a Super Bowl champion. And he was back in his hometown helping out today's youth. KVUE's Matt Mitchell has the story

Mason Crosby: 'We don't want to affect this game negatively' (02/2011): IRVING, TEXAS—Mason Crosby likes to brag about his high school, and because Georgetown High is in the state of Texas, Super Bowl XLV is a homecoming of sorts for the Packers’ kicker.