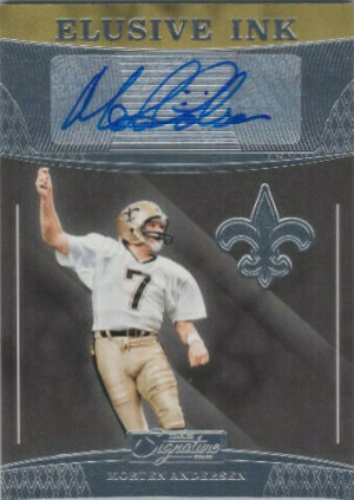 Morten Andersen (born 19 August 1960), nicknamed the "Great Dane", is a Danish former American football placekicker who played in the National Football League (NFL) for 25 seasons, most notably with the New Orleans Saints and Atlanta Falcons. Following a career from 1982 to 2007, Andersen holds the NFL record for regular season games played at 382. He also ranks second in field goals (565) and points scored (2,544). In addition to his league accomplishments, he is the Saints' all-time leading scorer at 1,318 points. Andersen was inducted into the Pro Football Hall of Fame in 2017 and, along with Jan Stenerud, is only one of two exclusive placekickers to receive the honor. More about Morten Andersen

Current items with a signature of Morten Andersen

These are the most current items with a signature of Morten Andersen that were listed on eBay and on other online stores - click here for more items.

Traded items with a signature of Morten Andersen

If you're interested in Morten Andersen Rookie cards you might want to take a look at our sister site that specializes in Football Rookie Cards only.

Most recently, these items with a signature of Morten Andersen were sold on eBay - click here for more items.

Morten Andersen, Kevin Mawae wait for Pro Football Hall of Fame to name Class of (01/07/15): Fifteen finalists for 2015 will be announced on NFL Network at 8 p.m. CT Thursday

Morten Andersen, Kevin Mawae among semifinalists for Pro Football Hall of Fame C (11/2014): List will be reduced to 15 finalists in January

Louisiana's all-time top 51 athletes: No. 51 Morten Andersen (06/2014): Morten "The Great Dane" Andersen debuted for the New Orleans Saints in 1982 and made the Pro Bowl seven times, six of which were with the Saints.

Morten Andersen wants the NFL to try longer extra points (03/2014): There’s been a bit of a backlash among NFL kickers against the idea that the extra point is too easy — “easy for you to say it’s easy,” the kickers seem to be telling the rest of us. But one of the greatest kickers in NFL history likes the idea of making extra points harder.…

Former Saint Morten Andersen's Hall of Fame chances, and who has the Super Bowl (01/2014): Sports reporter Rachel Whittaker and Saints beat writer Larry Holder give their Super Bowl analysis and predictions, plus would the Saints have a chance against the Broncos at Metlife Stadium? And see this week's trivia challenge winner.

Morten Andersen's snub can't be good for Jason Hanson's Hall of Fame chances (01/2013): Jason Hanson got some bad news Friday when the Pro Football Hall of Fame announced the 15 finalists who will be considered for election next month, and a kicker wasn't on the list.