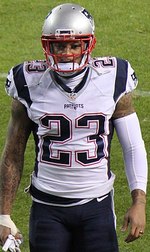 Patrick Christopher Chung (born August 19, 1987) is a Jamaican-American former football safety who played in the National Football League (NFL) for 12 seasons, primarily with the New England Patriots. He played college football at Oregon and was selected in the second round of the 2009 NFL Draft by the Patriots, whom he was a member of for 11 non-consecutive seasons. In between his Patriots tenure, Chung spent one season with the Philadelphia Eagles. A three-time Super Bowl winner for New England, Chung was named to the franchise's 2010s All-Decade Team in 2020. More about Patrick Chung

Current items with a signature of Patrick Chung

These are the most current items with a signature of Patrick Chung that were listed on eBay and on other online stores - click here for more items.

Traded items with a signature of Patrick Chung

If you're interested in Patrick Chung Rookie cards you might want to take a look at our sister site that specializes in Football Rookie Cards only.

The most expensive item with a signature of Patrick Chung (PATRICK CHUNG NEW ENGLAND PATRIOTS AUTOGRAPHED SIGNED JERSEY COA EXACT PROOF COA) was sold in December 2013 for $299.99 while the cheapest item (Patrick Chung Signed Senior Bowl Card) found a new owner for $0.99 in August 2021. The month with the most items sold (12) was November 2011 with an average selling price of $31.16 for an autographed item of Patrick Chung. Sold items reached their highest average selling price in February 2014 with $160.00 and the month that saw the lowest prices with $0.99 was March 2016. In average, an autographed item from Patrick Chung is worth $15.00.

Most recently, these items with a signature of Patrick Chung were sold on eBay - click here for more items.

Patriots safety Patrick Chung announces retirement after decade-long career in N (03/18/21): Chung opted out of the 2020 season due to COVID concerns

Patrick Chung makes transition from Patriots safety to superfan (09/13/20): While the veteran is excited to watch his teammates on TV, the Patriots' plans to replace him and the others who opted out are coming into focus.

Patriots almost saw another team captain opt out of the 2020 season before decid (07/30/20): Dont'a Hightower, Patrick Chung, and Marcus Cannon have already opted out

How the Patriots will replace Dont'a Hightower, Patrick Chung and others after o (07/29/20): Hightower, Chung, and Cannon all opted out of the 2020 season

Source: Pats S Chung reaches 2-year extension (05/2020): Linebacker Patrick Chung is receiving a $3 million signing bonus as part of a two-year extension, while the Patriots -- who have been tight to the salary cap -- create $925,000 in space, sources said.

Pats wary of Eagles TEs after Chung ruled out (11/2019): Patriots safety Patrick Chung, who had been limited in practice throughout the week with heel and chest injuries, will not play against the Eagles on Sunday.

Patriots list Patrick Chung among their inactives (10/2019): The Patriots will not have safety Patrick Chung tonight against the Jets. The team listed him among its inactives. Chung was questionable with heel and chest injuries after playing only eight snaps in the Patriots' Week Six victory over the Giants. He has 17 tackles and a pass breakup this season

Patrick Chung undergoes surgery (02/2019): Longtime Patriots safety Patrick Chung underwent surgery for the broken arm he suffered during Super Bowl LIII, he confirmed in a post on Instagram. This is the first of two surgeries for the veteran defender, who also needs shoulder surgery. Both procedu

LeGarrette Blount and Patrick Chung are latest Oregon Duck Super Bowl winners: O (02/2015): Congratulations! Your weather is set to . You can change the location at any time. Don't have an account?

Patrick Chung getting it done for Patriots (09/2014): FOXBORO — Safety Devin McCourty has played 98 percent of the defensive snaps in the Patriots' first three games, a hefty workload that was expected entering the season. But who he's been paired with has been surprising.

Patriots’ Patrick Chung Knocks Off Brent Celek’s Helmet With Big Hit (08/2014): The first half of Friday’s New England Patriots-Philadelphia Eagles preseason game was played amid a...

Patrick Chung reunited with Patriots (04/2014): FOXBORO - Safety Patrick Chung is back with the New England Patriots as the latest addition to their rebuilt secondary.

Philadelphia Eagles free agency update: Malcolm Jenkins and Chris Maragos are in (03/2014): The Eagles took steps toward retooling their undermanned secondary on Tuesday, the first day of the NFL’s free agency period.

Eagles-Saints: Earl Wolff active, Patrick Chung to start (01/2014): Wolff was active against the Chicago Bears two weeks ago, but played just four snaps -- a snap count he will probably duplicate against the Saints.

Patrick Chung, Kurt Coleman splitting reps at safety for Eagles (12/2013): Going forward, Davis said that Chung and Coleman will continue to split reps in practices and in the games until one of the two separate themselves from the other.

Eagles at Raiders Inactives: Patrick Chung active but won't start (11/2013): The Eagles only have 52 men on the roster due the trade of veteran NT Isaac Sopoaga earlier in the week. They didn't sign anyone to fill the final open roster spot yet.

Patrick Chung thought Aaron Hernandez was a "good kid" (07/2013): The hosts remarked that "fun" was rarely ever a word used by players to describe Bill Belichick. They also noted that the last time they talked to Chung, he seemed very careful about answering any questions and didn't seem to feel free to talk.

Philadelphia Eagles introduce S Patrick Chung and CB Bradley Fletcher (03/2013): Loading... BRADLEY FLETCHER: It's good to be here, to be an Eagle, and ready to get going here shortly. It's going to be a lot of fun, and we'll be working hard.

Patriots Marquice Cole, Patrick Chung made most of chance against Jaguars (12/2012): Your article has been sent. Injuries in the secondary led to some position and playing-time changes for the Patriots against the Jaguars last Sunday, but the defensive backfield responded with three interceptions.

Patrick Chung tunes up (11/2012): FOXBORO - While Patriots safety Patrick Chung has worked hard to get back on the field and find a rhythm since...

Patrick Chung can't seem to make play (10/2012): FOXBORO - The expectation for Patrick Chung this season was to make the leap from very good player to something...

Patrick Chung On Toucher & Rich: Patriots’ Defense Playing With Some Swag (09/2012): Patriots safety Patrick Chung admitted that playing with "swag" isn't the most important thing a defense can do. Still, when talking with Toucher & Rich on Tuesday morning, he admitted it doesn't hurt to have some.

Patrick Chung sees self as 'coach' (08/2012): FOXBORO - Patriots safety Patrick Chung never got to play with Rodney Harrison and#8212; Harrison retired the year before Chung came into the league and#8212; but it's clear Chung wants to be the type of leader Harrison was.