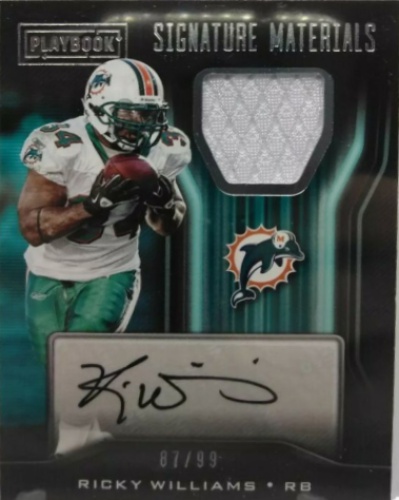 Errick Miron (born Errick Lynne Williams Jr.; May 21, 1977) is an American former football running back who played 11 seasons in the National Football League (NFL) and one season in the Canadian Football League (CFL). More about Ricky Williams

Current items with a signature of Ricky Williams

These are the most current items with a signature of Ricky Williams that were listed on eBay and on other online stores - click here for more items.

Traded items with a signature of Ricky Williams

If you're interested in Ricky Williams Rookie cards you might want to take a look at our sister site that specializes in Football Rookie Cards only.

The most expensive item with a signature of Ricky Williams (RICKY WILLIAMS 2004 AUTOGRAPHED Game Issued Worn Style DOLPHINS NFL STAT Jersey) was sold in October 2022 for $1595.34 while the cheapest item (Ricky Williams Signed Football) found a new owner for $0.01 in July 2010. The month with the most items sold (87) was December 2009 with an average selling price of $61.00 for an autographed item of Ricky Williams. Sold items reached their highest average selling price in October 2019 with $89.49 and the month that saw the lowest prices with $9.99 was June 2008. In average, an autographed item from Ricky Williams is worth $36.93.

Most recently, these items with a signature of Ricky Williams were sold on eBay - click here for more items.

Ricky Wiliams peels back the curtain on marijuana use during his playing days (07/19/22): The world has changed dramatically in recent years when it comes to attitudes regarding marijuana. When running back Ricky Williams entered the NFL in 1999, viewpoints and laws were very different. But players still used marijuana then, as they do now, to manage pain. Williams shared two stories wit

Ricky Williams, who shocked the NFL with his 2004 retirement, has just one regre (03/08/21): Williams finished just short of becoming the Dolphins' career rushing leader

Ricky Williams says the NFL first changed its attitude towards marijuana in 2014 (05/2020): The former Pro Bowl running back is a medical marijuana advocate

Ricky Williams' Heisman sells for auction-record $504,000 (10/2019): The Heisman Trophy won by Ricky Wiliams in 1998 at Texas was sold at auction for $504,000, setting a record for college football's most recognizable award. The winning bid for the trophy in Heritage Auctions' Fall Sports Memorabilia Collectibles offerings exceeded the previous auction record

Super sub Williams the hero as Cobblers snatch injury-time win at Stevenage (02/2019): Andy Williams came off the bench to score a stoppage-time winner as Cobblers laid to rest their relegation fears once and for all with a dramatic 2-1 victory at Stevenage on Saturday.

Ex-Saints RB Ricky Williams would skip football if given a do-over, plus other s (10/2014): Rex Ryan believes his twin brother Rob Ryan deserves a head coaching opportunity in the NFL.

Ricky Williams Has a Philosophical Question About Your Butt (01/2014): This guy …

Ricky Williams: Weed was my Popeye spinach (10/2013): According to a recent study on drug abuse, since the year 1990, the number of ... The Michigan State Police are warning residents of a new scam in which callers ...

Ricky Williams makes jump into coaching at UIW (09/2013): Ricky Williams has always, for better or worse, marched to his own beat. Williams, the 1998 Heisman Trophy winner and former NFL running back, was introduced by the University of the Incarnate Word as a football assistant coach during a press conference on Thursday.

Former Longhorn Ricky Williams to Throw Out Ceremonial First Pitch Friday (08/2013): ROUND ROCK, Texas - Former University of Texas running back and Heisman Trophy winner Ricky Williams will be on-hand Friday night, August 23, to throw out a ceremonial first pitch before the Round Rock Express takes on the Oklahoma City RedHawks at 7:05 p.m. at Dell Diamond.

Ricky Williams eager to mold young minds as coach (07/2013): HOUSTON (AP) - Ricky Williams can't change the past and wouldn't want to even if he could. He has decided to be a coach and dares anyone to tell him why his prior transgressions should preclude him from molding the next generation of football talent. "If you took slices of my life ...

Ricky Williams shares philosophy on yoga (06/2013): The former UT standout learned the ancient art back in 2004, and is sharing his knowledge with other enthusiasts. Williams explained his yoga philosophy to Matt Mitchell.

Check out Ricky Williams ' photos from Super Bowl XLVII (04/2013): Shot the game for ESPN The Magazine

Ricky Williams says Bill Parcells text convinced him to retire (06/2012): Ricky Williams simply delighted in playing moleskin with regard to the Baltimore Ravens this season. As well as the man was literally truly searching forward to pertaining back for the last year of his . . .

Ricky Williams On Football And Concussions (05/2012): There's a lot to chew on regarding the interview below with Ricky Williams and Dan Le Batard. I…

Ricky Williams getting acclimated to new running scheme (09/2011): Former Dolphins RB calls Ravens' plan "different" As the new running back on the block, Ricky Williams understands his role, which is to complement starter Ray Rice and bring a bruising style to the Ravens’ rushing attack.

Ravens Insider: Ricky Williams makes Ravens debut (08/2011): At 5-foot-10 and 230 pounds, Ricky Williams is just a smidge smaller than the tailback he replaced in the 6-foot, 235-pound Willis McGahee.

Man Claiming to Be Ricky Williams' Real Dad Files Lawsuit (12/2010): Dallas man says he has been in the shadows for years and wants $2.5 million.