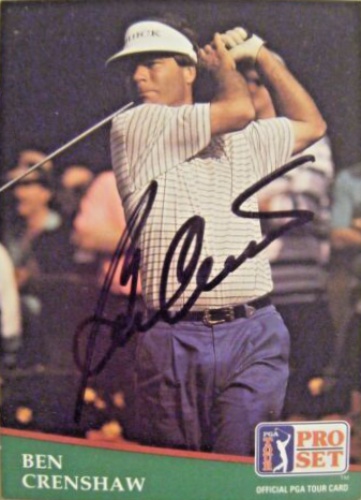 Ben Daniel Crenshaw (born January 11, 1952) is a retired American professional golfer who has won 19 events on the PGA Tour, including two major championships: the Masters Tournament in 1984 and 1995. He is nicknamed Gentle Ben. More about Ben Crenshaw

Current items with a signature of Ben Crenshaw

These are the most current items with a signature of Ben Crenshaw that were listed on eBay and on other online stores - click here for more items.

Traded items with a signature of Ben Crenshaw

The most expensive item with a signature of Ben Crenshaw (Ben Crenshaw Satin Finish Personal Putter signed & Engraved Cleveland Golf LOA) was sold in May 2012 for $500.00 while the cheapest item (Ben Crenshaw PGA Handsigned Autographed Masters Spectator Guide) found a new owner for $0.69 in November 2011. The month with the most items sold (25) was April 2015 with an average selling price of $34.99 for an autographed item of Ben Crenshaw. Sold items reached their highest average selling price in August 2018 with $249.00 and the month that saw the lowest prices with $3.13 was October 2019. In average, an autographed item from Ben Crenshaw is worth $18.88.

Most recently, these items with a signature of Ben Crenshaw were sold on eBay - click here for more items.

Ben Crenshaw Is Not Done With the Masters (04/06/22): He played it as an amateur in the 1970s, won it twice and will once again be telling tales at the Champions Dinner.

With his marriage to Polly Crenshaw dissolving, Ben Crenshaw went out and won hi (04/2014): Paulina and Amanda rule Instagram but there will never be another Polly Crenshaw.

Ben Crenshaw among those receiving Allianz exemption (02/2014): Four-time major champion Ben Crenshaw was one of four players receiving sponsor’s exemption as the field for this week’s Allianz Championship in Boca Raton was announced Monday.

Ben Crenshaw, Bill Coore planning Pinehurst’s ninth course (05/2012): Officials at Pinehurst Resort were so pleased by the restoration work done by Ben Crenshaw and Bill Coore on course No. 2, they’ve asked them to design the resort’s ninth golf course.

Ben Crenshaw helps budding Livermore girl golfer (07/2011): Casie Cathrea was not quite 7 years old when she first met Ben Crenshaw. She attended a putting clinic Crenshaw and Dave Stockton gave at Silverado Resort in Napa in October 2002 - those two know a little about putting...

Rubenstein: Ben Crenshaw strips Pinehurst No. 2 to its roots (04/2011): “I really don’t care what the players shoot in the Opens,” golfer says. “I just want them to be interested in the way it’s meant to play.”