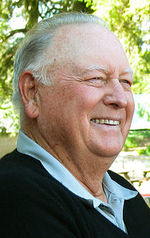 Current items with a signature of Billy Casper

These are the most current items with a signature of Billy Casper that were listed on eBay and on other online stores - click here for more items.

Traded items with a signature of Billy Casper

The most expensive item with a signature of Billy Casper (MASTERS WINNERS SIGNED 2010 PIN FLAG 17/S - GARY PLAYER - BILLY CASPER - FALDO +) was sold in June 2014 for $270.00 while the cheapest item (Billy Casper Golf Signature/Auto/Autograph Card) found a new owner for $0.55 in January 2013. The month with the most items sold (42) was February 2015 with an average selling price of $14.99 for an autographed item of Billy Casper. Sold items reached their highest average selling price in July 2019 with $149.99 and the month that saw the lowest prices with $0.75 was January 2019. In average, an autographed item from Billy Casper is worth $10.39.

Most recently, these items with a signature of Billy Casper were sold on eBay - click here for more items.

Billy Casper remembered for golf mastery and humanitarian spirit (03/08/15): Hall of Fame golfer Billy Casper was laid to rest Saturday in Springville after receiving praise for his championship spirit...

Lee Benson: Billy Casper gave and gave, until it ran out (03/08/15): Golfer Billy Casper, who died Saturday at the age of 83, was a legend on and off the course.

Pro golf pioneer Billy Casper dies at age 83 (03/08/15): After an illustrious golf career that spanned more than four decades, one of the sport's legends has died. Billy Casper, a pioneer of professional golf, died Saturday afternoon at his home in Springville, Utah, at the age of 83, the San Diego Union-T...

Pro golf pioneer Billy Casper dies at age 83 (03/2015): After an illustrious golf career that spanned more than four decades, one of the sport's legends has died. Billy Casper, a pioneer of professional golf, died Saturday afternoon at his home in Springville, Utah, at the age of 83, the San Diego Union-T...

Billy Casper's reassurance changed one young Marine's life (02/2015): Published: Saturday, February 14, 2015 | 2:42 a.m. MYRTLE BEACH, S.C. -- Clebe McClary of Pawleys Island has had a persistent cough for the past few days, something he and his wife believe is the result of his exposure to Agent Orange during the Vietnam War.

Billy Casper Golf Classic charity golf tournament benefits families like ex-BYU (09/2014): For most of the golfers out at Riverside Country Club in Provo Monday morning, the big challenge was deciding which club to hit from 84 yards out and the big success was dropping a tee shot cl…

Midland selects Billy Casper Golf as new management company for Currie Golf Cour (02/2014): Currie opened in 1954 and sits on the banks of the Tittabawassee River with two 18-hole courses.

Negotiations begin with Billy Casper Golf (11/2013): The private manager of the public Black Mountain Golf Course might budge when it comes to changing a contract that has been criticized by Town elected officials as expensive and detrimental to Black Mountain taxpayers, Black Mountain Mayor Carl Bartlett said.

Ardmore priest remembers caddying for Billy Casper (06/2013): The other day, two-time U.S. Open champion Billy Casper (1959, 1966) was about to give a little talk at Merion Golf Club about how the game has changed when he was given a message: Your former caddie is outside.

About Utah: Billy Casper makes triumphant return to Notre Dame (09/2012): Long before he became one of the winningest golfers in history, and well before he adopted Utah as his home, Billy Casper...

Billy Casper - A Giant among Golfers (06/2012): Billy Casper turned 81 yesterday (June 24th), something that will come as a surprise to those of us who didn't even know he had celebrated his 80th.

Golf has become good business for Billy Casper (05/2012): Billy Casper was known for his unique practice and playing strategies in a professional golf career that included three major championships, but he uses more tried-and-true principles in his golf course management business.

Billy Casper at YCC on Friday (10/2011): Golf legend Billy Casper will be at Yellowstone Country Club on Friday.

Billy Casper memorabilia on display (05/2011): Hall of Famer Billy Casper deposited some of his most treasured golf memorabilia in a showcase at Alpine Country Club on...