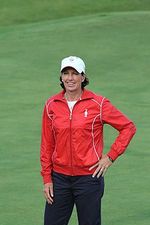 Juli Inkster (born Juli Simpson; June 24, 1960) is an American professional golfer who plays on the LPGA Tour. With a professional career spanning 29 years to date, Inkster's 31 wins rank her second in wins among all active players on the LPGA Tour; she has over $14 million in career earnings. She also has more wins in Solheim Cup matches than any other American, and is a member of the World Golf Hall of Fame. Inkster is the only golfer in LPGA Tour history to win two majors in a decade for three consecutive decades by winning three in the 1980s, two in the 1990s, and two in the 2000s. More about Juli Inkster

Current items with a signature of Juli Inkster

These are the most current items with a signature of Juli Inkster that were listed on eBay and on other online stores - click here for more items.

Traded items with a signature of Juli Inkster

The most expensive item with a signature of Juli Inkster (JULI INKSTER Signed Autographed 2002 US Women's Open Pin Flag w/ Inscription) was sold in June 2016 for $99.99 while the cheapest item (JULI INKSTER SP AUTHENTIC SIGNATURE GOLF WORN SHIRT !) found a new owner for $0.80 in February 2011. The month with the most items sold (6) was August 2020 with an average selling price of $4.12 for an autographed item of Juli Inkster. Sold items reached their highest average selling price in June 2016 with $55.97 and the month that saw the lowest prices with $0.88 was July 2017. In average, an autographed item from Juli Inkster is worth $5.00.

Most recently, these items with a signature of Juli Inkster were sold on eBay - click here for more items.

Juli Inkster two shots off lead in LPGA Legends debut (11/2014): Layoffs affect golfers in different ways. For Juli Inkster, not competing for the past six weeks did a number on her putting stroke Saturday.

Juli Inkster back in Portland again, on 15th anniversary of getting into Hall of (08/2014): She will play in the tournament for the 28th time.

Juli Inkster bids farewell to US Women's Open (06/2014): Juli Inkster sank her final putt for par, then tipped her cap and waved her putter.

Local Roundup: Santa Cruz's Juli Inkster shoots par at ShopRite (05/2014): Santa Cruz native Juli Inkster shot an even-par 71 to tie for 63rd during the first round of the ShopRite LPGA Classic at Stockton Seaview in Galloway, New Jersey, on Friday.

Local Roundup: Santa Cruz's Juli Inkster shoots 72 during third round at Safeway (08/2013): Wide receiver Nick Johnson, a San Lorenzo Valley High and Cabrillo College alum, was cut by the St. Louis Rams on Friday, according to the St.

SC's Juli Inkster, 53, closes strong in opening round at US Open (06/2013): SOUTHAMPTON, N.Y. -- South Korean golfer Ha-Neul Kim had the round of the day at the U.S. Women's Open, but Santa Cruz native Juli Inkster had the shot of the day at Sebonack Golf Club to stay in the hunt.