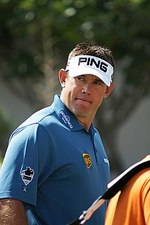 Lee John Westwood OBE (born 24 April 1973) is an English professional golfer. Noted for his consistency, Westwood is one of the few golfers who has won tournaments on five continents – Europe, North America, Asia, Africa and Oceania – including victories on the European Tour and the PGA Tour. Westwood has also won tournaments in four decades, the 1990s, 2000s, 2010s and 2020s. Westwood was named European Tour Golfer of the Year for the 1998, 2000, 2009 and 2020 seasons. He has won the 2000 European Tour Order of Merit, and the renamed 2009 and 2020 Race to Dubai. Westwood has frequently been mentioned as one of the best golfers without a major championship victory, with several near misses including three runner-up finishes. More about Lee Westwood

Current items with a signature of Lee Westwood

These are the most current items with a signature of Lee Westwood that were listed on eBay and on other online stores - click here for more items.

Traded items with a signature of Lee Westwood

The most expensive item with a signature of Lee Westwood (Lee Westwood G10 Rapture Golf Bag-Autographed) was sold in November 2010 for $810.00 while the cheapest item (Lee Westwood Signed Autographed 8x10 Photo Pga Jsa Coa Ping) found a new owner for $0.99 in October 2012. The month with the most items sold (8) was June 2011 with an average selling price of $28.98 for an autographed item of Lee Westwood. Sold items reached their highest average selling price in September 2011 with $140.99 and the month that saw the lowest prices with $1.50 was April 2015. In average, an autographed item from Lee Westwood is worth $24.99.

Most recently, these items with a signature of Lee Westwood were sold on eBay - click here for more items.

Lee Westwood, former No. 1-ranked golfer, applies for waiver to compete in first (05/04/22): The former world No. 1 had some interesting things to say about Saudi Arabia on Wednesday

First Cut: Lee Westwood continues to roll with third Race to Dubai championship (12/14/20): It's been an unreal 25-year run for the Englishman

Lee Westwood skipping 2020 PGA Championship because of COVID-19 concerns in Unit (07/25/20): The Englishman is missing the year's first major because of travel worries

First Cut: After a big win in Abu Dhabi, Lee Westwood looks like a dark horse at (01/2020): Plus, Fowler struggles on the weekend and Andrew Landry's stunning win

Players to Watch at the Nedbank Golf Challenge (11/2019): Lee Westwood has returned to defend his title, and the rest of the field hopes to take it away from him.

WATCH: Airplane captures video of Lee Westwood sinking a hole-in-one at Carnoust (09/2019): This shot is pretty unbelievable, and the angle of the video makes it even better

Lee Westwood: Paul Casey's caddie was giving him Puerto Rico pin positions (02/2019): The time of "show up, keep up and shut up" is long gone for PGA Tour caddies these days, but this Lee Westwood exclusive makes a decent case to bring the old days back.

Westwood taking new approach on the course – Daily Trust (01/2019): Lee Westwood believes a new outlook on golf is benefiting him out on the course after making an encouraging start to the Omega Dubai Desert Classic. Westwood mixed seven birdies with two bogeys in the opening round to post a five-under 67 at Emirates Golf Club, keeping him within a shot of the early

Lee Westwood again stars in Malaysia (02/2015): Lee Westwood maintained a familiar position at the top of the Maybank Malaysian Open leaderboard with a five under par 67 in the second round, but he has Alejandro Cañizares for company after the Spaniard birdied the last for a wonderful 65.

Golf: Lee Westwood bemoans open criticism of Tom Watson (10/2014): Lee Westwood was disappointed to see stories from the U.S. team room at the Ryder Cup complaining about Tom Watson as the captain, saying yesterday that those matters should be kept private and “nothing good can come of all this.”

Lee Westwood wraps up year full of change focused on building continuity (12/2013): PONTE VEDRA BEACH, Fla. – This has been a season of big change for Lee Westwood, and his debut last week in the Franklin Templeton Shootout was an example.

Lee Westwood still hopeful of Major win despite Muirfield 'misery' (07/2013): London, July 24 : After Lee Westwood's 62nd attempt at winning a Major went in vain, the former World No 1 has claimed that he is mentally stronger than ever before despite losing a two-shot lead in the final round of this year's Open Championship.

2013 U.S. Open: Lee Westwood 'in decent position' after first round (06/2013): England's Lee Westwood met briefly with reporters after carding an even-par 70 in the first round of the U.S. Open at Merion Golf Club. Here's a transcript of his remarks.

Lee Westwood of England now considered best player never to win a major (04/2013): Lee Westwood has played 60 majors without winning, and has seven finishes in the top three.

Lee Westwood showing encouraging form ahead of the Masters (03/2013): Lee Westwood has the chance to go to the Masters with a morale-boosting victory under his belt after a third round 67 left him just two strokes off the lead in the Shell Houston Open.